The evacuation of civilians — especially women and children — continues in Baghouz, the Islamic State's last bastion.

BAGHOUZ — Trucks meant for livestock are snaking through the arid plain in a single file, swept under sandy gusts until they've reached a cluster of white tents deep in the middle of the desert. Gripping the back of the caravans are ragged-looking children and Kurdish fighters for the Syrian Democratic Forces (SDF) who'd emerged from a remote corner of southeast Syria in the final days of February.

One by one, each truck released hundreds of exhausted and silent women, black silhouettes carrying bags and infants. Coming off the trucks as well are both slews of children and more than a few wounded. And finally, a few dozen fully-bearded men of various ages, wrapped in long coats, emerged and were set aside to be interrogated.

The mix of faces said everything about the hell that Baghouz had become, an ordinary village on the border of Iraq that became the last bastion of the "califate" established in 2014 by the so-called Islamic State (ISIS).

"The califate is not dead! I don't know how it will be reborn but I know that it's not finished," assured Samira (whose name has been changed). The Algerian had been transferred to the tents along with her two daughters by the Free Burma Rangers, a Christian organization that is aiding the displaced of Baghouz during their first step of exile. Under her black niqab, the young woman refuses to divulge her identity. She only reveals that she left Algiers for Raqqa, Syria in 2015 with her four children and her husband, a move that was "a mutual agreement," in order "to be able to practice their religion."

Many decided to stay, not because they want to die but because it's our home.

Samira fought with the retreating jihadist group through their defeats, as a family and then alone with her two daughters who are barely ten years old. Her husband and two other children were killed. She says she regrets nothing of her past four years. "I don't reproach the ISIS for anything," Samira insists. "It applies the rules of the Koran. I'm not saying there are no errors. People made mistakes, like they do everywhere. If ISIS has committed crimes against humanity, what do Algeria, France and the United States have to say? I see your deaths and I see our deaths, I see where justice and injustice lie. ISIS hasn't massacred children."

Only the diehards and their families leave Baghouz, fleeing the four corners of the "caliphate" in this last hide-out. Many are Iraqi and Syrian, but others hail from France, North Africa, Uzbekistan and Turkey. As soon as the SDF, a coalition of Arab and Kurdish forces, started their offensive in the beginning of February, they refused to join the 30,000 civilians who fled.

The imposed headquarters of the Kurdish forces and the menace of the international coalition's planes diminished their determination. Since a ceasefire was decreed last month, more than 7,000 of them have left Baghouz. There could still be close to 5,000 inside, including hundreds heavily armed soldiers, according to the SDF. "There are many who decided to stay, not because they want to die but because it's our home," asserts Samira. 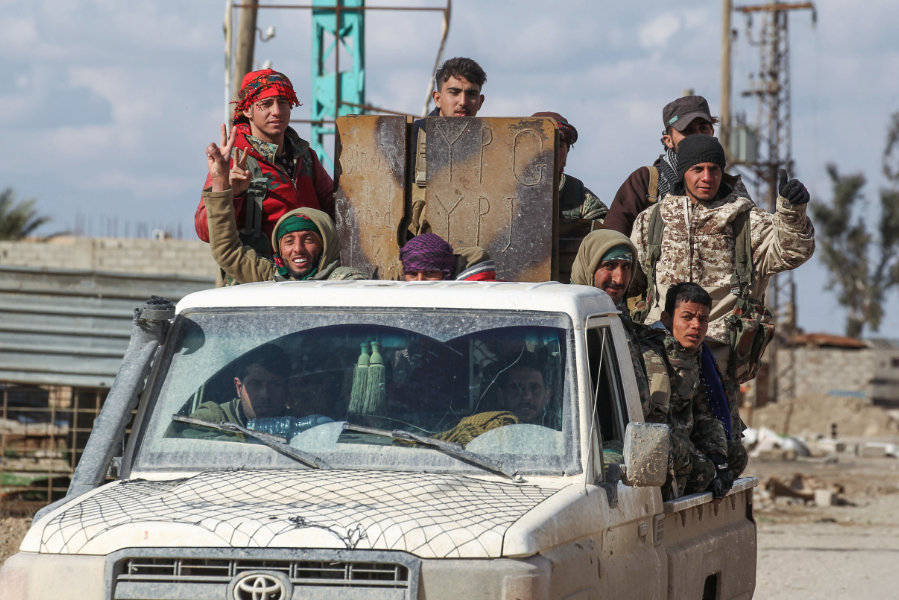 Zeynep (a pseudonym) came to Syria from Turkey five years ago to join her husband, a fighter, and stayed in Baghouz to wait for the final assault. The husband compelled the 30-year-old mother of two to flee despite her insistence on staying by his side. Samira also resigned to leaving Baghouz for her children. "I couldn't leave my daughter. She was hit by the tanks of the nasserites [a pejorative name for Bashar al-Assad's regime] a month ago," she explains, indicating to her daughter lying by her side with serious leg injuries.

In Baghouz, there were no more field hospitals where "doctors, especially foreign ones who spoke literary Arabic, were not very experienced," and where "there wasn't much medicine or material for operations," according to Oum Maraz, a 27-year-old Syrian who had her fourth child via Cesarean section last month. Installed in Baghouz for the past two years with her husband, an imam for ISIS (both are originally from Raqqa), Oum Maraz recently found refuge with her children in the kitchen of a house shared by multiple families.

She decided to flee with the SDF's trucks after her husband died in a bombing a week ago. "I heard some women say that Abou Bakr al-Baghdadi [head of ISIS] ordered women and children to leave and let the men fight," she said. "I think it's just women's gossip."

Just two weeks earlier, the jihadi fighters had been blocking families from leaving, forcing them to resort to smugglers who charge $1,000 per person to leave Baghouz. "For the past two weeks, ISIS has allowed the departure of the wounded and anyone who wants to leave. For me, it was my husband who decided that we would stay," recounts Oum Maraz.

But her stomach pains and the hunger that pulls at her children due to the shortage of food and clean water finally pushed her to leave. "The situation in Baghouz is very bad. There's nothing left at the market. The past few days, ISIS gave out food at a single distribution point. There was only bread and soup. We had to share one cake between us, so I let the children have it," Oum Maraz continues in a weak voice.

The women say that dozens of children are dying of hunger in the village. Twenty or so more died on the way to the Tanak camp. The ideology and the future of ISIS are far from Oum Maraz's mind. "What's important to me is that my children lead a normal life," she concludes.