A group of good Samaritans gathers regularly in Trieste, near the border with the Balkans, to receive weary migrants and tend their wounds.

TRIESTE — Ali will never know it, having died Sept. 21 after refusing to have his feet amputated, but this story begins with his own dramatic end.

It is a story about people who decided not to avert their gaze from what they saw before them, instead arming themselves with gauze and disinfectant to treat the wounds of the migrants coming to Italy after endless travels and harsh rejections.

It is a story about shoes, the essential gear allowing them to continue their journey on.

"Last February Ali was captured by the Croatian police, who, after mistreating him, confiscated his shoes and clothes and sent him back to Bosnia, in the ice and snow. Ali ended up wandering for hours in Velica Kladusa, at the northern border with Croatia. His feet developed deep frostbite and tissue necrosis. After months of suffering, he died because of the inhumanity of the police," says Lorenza Fornasir, a psychotherapist and activist who signed Torture at the Borders of Europe, a petition addressed to the European Court of Human Rights.

A small and spontaneous group started to take care of the feet of the migrants.

Ali refused to give up his feet, since without them he wouldn't have had a way out. The choice ended up costing him his life. Today, feet have become the symbol of the bodies and lives in need of saving.

This story takes place in Trieste, at Italy's northeast border with Croatia. Here, every day, up to 20 people — mostly Kurds, Iraqis and Afghans — cross the border to Italy along the Balkan route.

According to the UN Commission on Human Rights, in the first 10 months of 2019 more than 45,000 people arrived in Bosnia and Herzegovina, a figure that doesn't take into account unknown numbers of people who are not registered. 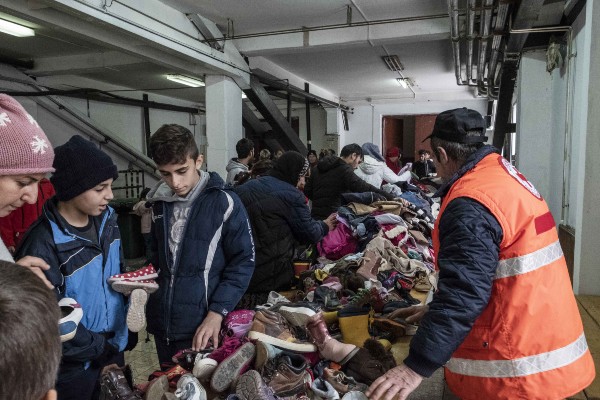 They are all ready to try what they call "the game": attempting to enter European territory through Croatia but at the risk of finding themselves trapped in camps "in appalling conditions" or compelled to face the "drones and dogs of Croatian police," according to the report.

At the end of last summer, a small and spontaneous group started to gather in front of the railway station to take care of the feet of the thin and exhausted migrants.

They met the latest arrivals on Jan. 6: "They had just come out of the snow-capped mountains of Croatia and icy woods of Slovenia starving, wearing plastic windbreakers, with macerated feet and infected wounds. They were in the middle of the city square, without asking anybody anything. They repeated only one sentence: 'Big problem with Croatian and Slovenian police,'" recounts Lorena.

She and her husband, Gian Andrea Franchi, started to take care of migrants arriving to Italy in 2015, when they lived in Pordenone. "We were not volunteers. But we saw them arriving in a terrible state. So we decided to help them not only as an act of solidarity, but also as a political act, "Lorena explains. "We wanted to tell them, 'You exist to us.'"

It's a form of resistance against a society based on individualism and apathy.

In 2018, the couple also started going back and forth between Italy and Slovenia, with Bihac and Velika Kladusha, "in order to bring donations to help the people taking care of those migrants outside the official refugee camps."

Two or three times per week, Lorena and the others go to the square where the migrants gather hoping to catch a train to Northern Europe.

They bring with them medicine and gauze, but also clothes and sandwiches. "Tending to their feet makes a statement because of the strong Christian imagery it awakens," explains Gian Andrea Franchi, an 82-year-old former philosophy teacher who, with his wife, created the association Linea d'ombra — Shadow line.

"Our gesture is a political one, toward those coming from countries devastated by neocolonialism. It's a form of resistance against a society based on individualism and apathy, and against Salvini's deadly decrees," he adds.

Their aim is to create a network with many other cities, following the example of the Mamre organization from Borgomanero, in the Northwestern Piedmont region, which asked the Barlo di Gargallo shoe factory to produce 70 pairs of soft shoes "with strong soles for migrants' suffering feet." The order was recently delivered to Trieste.

They're often little more than children in pitiful conditions.

"They were specially and very carefully made for us," says Lorena. "It's not just material aid, there's a real thought behind the gesture."

Adriana Giacchetti is also part of the group tending to the wounds of migrants. "It's impossible to remain indifferent," she says. "They come out of the woods malnourished, and it's our responsibility. It's the responsibility of a Europe that is arming the police of several countries and pushing them to operate like barbed wire. They all tell of being beaten and sent back to Bosnia. They have horrible stories. But I also believe in an Italy of solidarity, despite the negative consequences of anti-migrant media campaigns."

Paola Spinelli, a former journalist for the Italian public broadcasting group Rai, is another witness to the hardship the migrants suffer. "I live near the Carso river and I see them walking," she says. "They're often little more than children in pitiful conditions, with sandals and bloody feet. Some of them have tried to cross the border eight or 10 times. It's 'the game,' as they call it, a real-life round of snakes and ladders where the risk is always to be sent back to the starting point. Some spend years in the refugee camps trying to cross the border."

"There's a feeling of powerlessness," Spinelli continues. "But it only takes one person to get involved, and then everything activates."