Salimi Saga: How The Iranian Revolution Changed One Family

SARI — On this frigid January night, Maliheh Salimi's home is brimming with excitement. A rental company delivered metal chairs and tables early in the morning. Pink and white balloons were inflated; lace was knotted in the shape of a butterfly and pinned on the walls. Large pans, full of rice that Maliheh had left to simmer in a mix of water and salt, are steaming on a gas stove. The 57-year-old woman says she's lucky: One of the apartments in her building, in the modest neighborhood of Shahran (west of Tehran), was free this month, and the landlord agreed to let her use it as a temporary venue for her second-born son Amir's engagement party.

Part of the family traveled from Sari, a city in the north of the country. The Salimi* family are a bit like the protagonists Emir Kusturica's movie Underground: Within a few seconds, they can go from total silence to a frenzied dance, clapping their hands and shuffling their feet, while the most inventive of them borrow saucepans and trays from the kitchen to use as makeshift drums.

Women have arrived dressed in black chadors (the full-body veils worn by the most traditional and religious Iranian women). They slip away to change and quickly reappear in chadors of lighter shades, as they are inside and it is time to party. In the room, the marble floor and white walls are lit by raw neon light. Other women are wearing ample dresses with long sleeves and have chosen simple headscarves instead. Some — the younger ones — wear makeup, short skirts, their heads uncovered. All of them gathered in the same Salimi family. The venerable Madame Salimi is the eldest: At 80, she is the mother of some, the sister of others, or their aunt. But this evening, she is first and foremost the grandmother of the groom-to-be.

Looking at her, and even knowing her well, you couldn't possibly fathom how different her generation was from the ones that followed. Those differences — however trivial they may seem — really are evolutions, freedoms that were obtained gradually through everyone's resistance against the rigidity of Iranian society and, on a smaller scale, against that of the family. This is what makes the Salimis a perfect example of the kind of middle-class, educated families who have transformed themselves, and, in turn, transformed Iranian society since the revolution of 1979.

In the family's hometown of Sari, back when Madame Salimi's legs still allowed her to walk the streets of her neighborhood, people would stand to greet her. She is a generous woman who has earned the respect of the inhabitants. In Sari, if someone has a problem, they know where to turn. Madame Salimi always finds a solution.

I still remember the doors I'd knock on.

Her reputation dates back to before the revolution. In the 1970s, her husband was an outspoken critic of the dictatorship of Shah Mohammad Reza Pahlavi. After dark, he would lower the shutters of his copy shop and, with the help of his two eldest sons, Ali and Ramin, photocopy the press releases of Ayatollah Ruhollah Khomeini. The great leader, driven out of Iran in 1964, was then living in exile in France. "I was 14 years old when, one day, I saw my parents sitting on our attic floor," recalls Ramin, now 54. "My father would start his tape recorder and stop it a few seconds later. My mother would write the words down: ‘We … the people … of Iran.' It was a press release from the imam (Khomeini.) An opponent to the regime, all the way from France, was dictating the imam's words to another revolutionary in Iran, who recorded them on a cassette and would then distribute it around. And so on and so forth, from house to house, the words circulated throughout the country in just a few days."

In Sari, to inform people that a protest was about to take place, Ramin would take his bike, following his father's advice, and pedal his way through the streets, knocking on doors to ask every inhabitant to tell four others: "The next morning, we met where we had agreed and, suddenly, there were 500 people! An hour later, 2,000…. Magnificent! I still remember the route I'd take, and the doors I'd knock on."

Overthrowing the Pahlavi dynasty was then felt as a necessity for many, due to the repressive climate and the dictatorial character of the system. Ramin's sister, Maliheh, remembers when going back to school after deciding to cover her hair with a scarf. She was 15, then: "The headmistress first refused to let me enroll because, on my ID photo, I was wearing a headscarf." 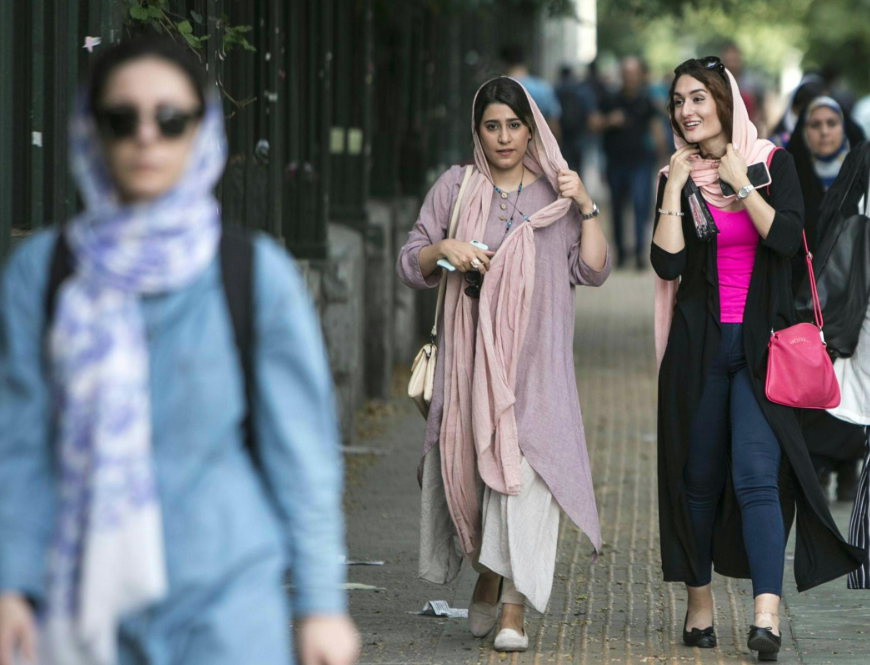 Everyone who is old enough remembers the day the Shah left the country, in February 1979, and even more so the day that imam Khomeini returned to Iran, from France, after almost 15 years of exile. "Those were our first national holidays ever!" says Ramin. What happened next is like watching a film on fast-forward. The Islamic Republic was established the same year. But in November 1980, Iraq attacked Iran. Ramin followed in the footsteps of his eldest brother, Ali, and left for the front lines. "Both of them wanted to fight," Madame Salimi remembers. "Even if I had told them no, they still would have left. They were in love with their country and with the revolution."

Beneath the bombs, in the southwest of Iran, close to the border with Iraq, Ramin recalled getting ready for his Baccalaureate exam with the help of a few school books a friend had sent him. He passed his exam in Ahvaz and when he returned to Sari for a surprise visit, he caught his two little brothers as they were playing chess. "I broke the chessboard in two and chucked it into the trash. And yet, I used to love that game ..." Ramin recalls. Chess had just been prohibited and remained as such until 1988, when Ayatollah Khomeini lifted the restriction.

After a year on the front, Ramin enrolled in a howzeh, a religious school, with the goal to become a member of the clergy, "because [their] family was religious and all the universities all closed around that time," following the cultural revolution of 1980-1983. As the Islamic Republic was conducting a purge on "Western elements" in the education system, Ramin became a high school teacher, teaching philosophy, logic, religion, and the Arabic language.

It's also the time when Ramin decided to change his name to Mohsen, "more conventional" and adapted to a religious career under the turban. "My former name sounded a bit too 'cool guy,'" he says with a smile.

I liked my life as it was.

The years went by. In 1988, the war with Iraq ended, with the overall death toll between 500,000 and 700,000. In 1989, Ayatollah Khomeini died; Mohsen walked dozens of kilometers to attend the funeral. "As a leader, he was as charismatic as can be. We idolized him," he says today. The following decade, the young man carried on with his religious studies, while getting a Bachelor's in political science and a Master's in history. That's when he decided he did not want to become an imam after all. "I liked my life as it was."

Society changed. The shadow of war faded, life resumed its course. Zeinab, the youngest daughter of the family, born in 1981, turned out to be a rebellious teenager: At 14, she decided not to wear her headscarf at family celebrations, against the advice of her older brothers. "Ramin and Ali kept criticizing me," she recalls. Zeinab became the target of rumors about her relationships with boys. In a small town like Sari, she was seen as too frivolous, not respectable enough. 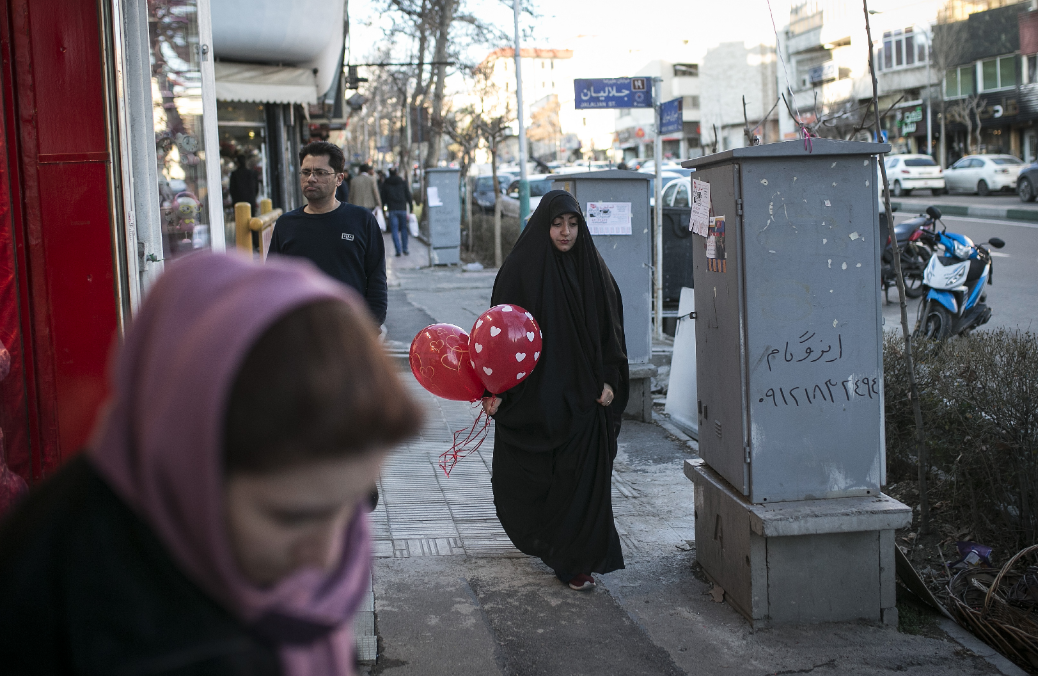 In 1997, after years of what many consider "wishy-washy" politics, reformer Mohammad Khatami's candidacy awakened sections of society that saw the possibility of a new era in this man, likely to bring forth more political and societal openings. Mohsen would wind up campaigning for the candidate along with his students.

Khatami's landslide victory in the first round was a surprise. Newspapers were created, freedom of speech increased. Women claimed more rights. Civil society took root. Ramin gradually stopped using his new name. Once a strictly pious man, he started shaking hands with his female cousins from time to time. In the family, things started changing too: While before, someone's absence was brushed away by a vague "oh, he's on duty at the hospital," separation and divorce were now no longer taboo.

Zeinab ended up marrying her boyfriend. The two had been meeting up in secret for more than seven years, but Madame Salimi refused to acknowledge the young man's existence before his parents officially came to ask for the hand of Zeinab, now a 37-year-old doctor. "Because of my position in the town, I could not consider him my daughter's boyfriend," says Madame Salimi. "That just wasn't the way things were done." Choosing to marry your boyfriend wasn't done either — but that's what happened. The couple now has a daughter, Asal.

Everyone knew something was wrong.

But the "greatest ordeal that God has planned" for the Salimi family happened in 2009. That's when Shaghayegh, the niece of Ramin and Zeinab and Madame Salimi's granddaughter, decided she wanted a sex-change operation. Such interventions had been authorized in Iran following a 1981 fatwa by Ayatollah Khomeini, but in a small town like Sari where everyone knows each other, how were they to face this "shame," this "disgrace"? How could they avert such a disaster? Even Zeinab, the youngest and most progressive of the siblings, struggled to make her peace with Shaghayegh's decision.

"I've always behaved like a boy," says Siyavash — the name Shaghayegh chose after transitioning. "I hated being called ‘Miss.' Everyone in our family knew that something was wrong, but at the same time, nobody wanted me to do anything about it." Siyavash, now 30, runs a restaurant in Sari. He says that his parents, aunts and uncles "cried a lot, but they've finally come to terms with it."

Siyavash underwent surgery twice in 2015: to remove his uterus and ovaries, and then his breasts — two operations whose costs were partly covered by social security and a health insurance fund. Every now and then, a member of his family will inadvertently call him "Shaghayegh," before immediately rectifying. Seeing Siyavash for the first time after his transition is always a source of concern for the family. Like tonight, for instance, at Amir's engagement party.

Siyavash catches a couple of furtive glances, particularly aimed at the nascent black hair of his beard and mustache. "They are very religious and strict. It doesn't take much to look at them and read in their eyes what they think," says Ramin, glazing over at a group of women in white chadors sitting in the marble room. But that doesn't seem to bother Siyavash, who flaunts a bow tie — and a matching purple sweater — and dances, as a man comfortable in his body. "I feel better," he says. "This isn't heaven, but it's a lot better than the hell I used to live in."

The Salimi family is hardly an isolated case. According to Zeinab, the youngest of her generation, born two years after the revolution, "almost all families have gone through more or less similar experiences, the same evolutions." Glancing toward Madame Salimi, she adds: "Even my mother has changed."

*Names were changed at the request of those concerned.

With a battered economy and recent anti-government street protests, can Iran fulfill its promise ...

Will Iran Step In To Suppress Lebanon And Iraq Uprisings?

Protesters in Lebanon and Iraq have been venting their fury at Iran, which is accused of practica...