With a battered economy and recent anti-government street protests, can Iran fulfill its promise to avenge the U.S. killing of Qasem Soleimani? Can it afford not to?

Iran and the U.S. have spent the past 48 hours trading threats after an American drone strike Friday that killed General Qasem Soleimani, head of its Revolutionary Guards Quds force. Even as Iran's supreme leader Ayatollah Khamenei led prayers at Soleimani's funeral on Monday, the question of how and where Tehran will respond looms over the region and the world.

After Iran's announcement Sunday that they would pull out of the remaining restrictions of the 2015 nuclear accord, the leaders of France, Germany and the UK urged a "deescalation" of tensions in the region. French daily Le Monde described the move as a sign that Tehran will "play two tables," targeting U.S. interests militarily and dividing the broader international community by pursuing its nuclear program.

The question of how and where Tehran will respond looms over the region and the world.

Iranian media has carried non-stop images of mass mournings in Baghdad and Tehran, leaving the impression of unanimous national and regional outrage. Still, it is difficult to gauge both public sentiment, and how exactly Iran's rulers will respond to the assassination of the most iconic and influential military leader of his generation.

The official talk in Tehran has cast left little doubt that it will target the United States and/or American interests around the world. The head of the Iranian Revolutionary Guards, Hossein Salami, was reported as telling state television that Soleimani's killing would entail "a strategic revenge" that would "end U.S. presence in the Middle East." His deputy, Mohammad Naqdi, has likewise said that revenge would be "definitive" and the "Americans are not capable of withstanding an extensive" war. They should "pack" their bases and leave, if "they want to save their lives," the semi-official Fars agency cited him as saying. 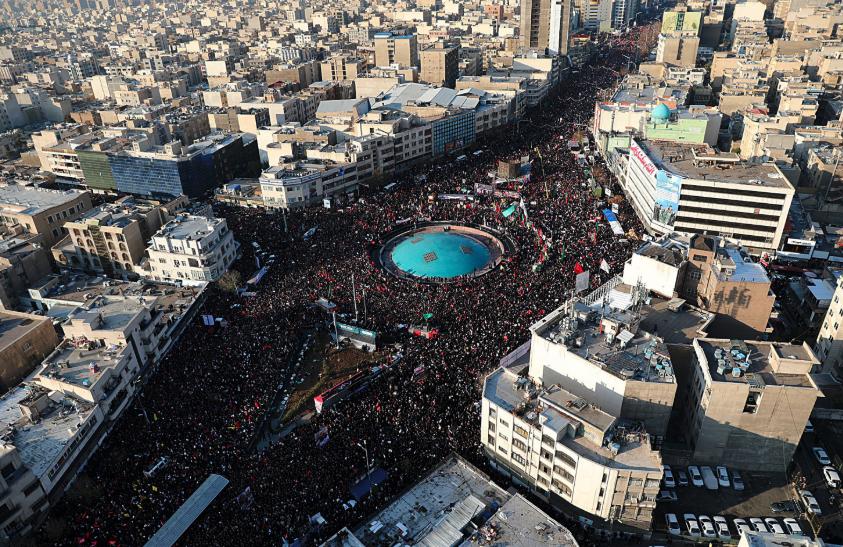 His comments may suggest multiple actions over time rather than a single major strike, in keeping with the country's strategy of waging "asymmetrical" warfare. Fars agency cited one prominent hardliner in Tehran, the editor of the Kayhan newspaper Hossein Shariatmadari, as saying that "America is not sitting in a glass room. It is vulnerable on all sides," which again may suggest hit-and-run tactics or a bomb attack somewhere. Iran has a range of allies and agents like Lebanon's Hezbollah or Iraq's Shia militias, apparently ready to do its bidding.

BBC Persian picked up on a division of opinions among ordinary Iranians concerning the killing. A European-based Iranian listener to the broadcaster who gave her name as Paniz called to say Soleimani did not "deserve this," saying he had worked hard for Iran and fought ISIS and the Taliban (at the height of its caliphate ISIS did not hide its hostility to Iran). A listener named Mas'ud said Iranians were "confused" if they were mourning the Supreme Leader's "right-hand man" just weeks after protesting against the country's "dictatorship." Another listener, Hamidreza, called Soleimani a decisive "shaper" of Iran's regime, saying he could not be deemed as uninvolved in its repressive practices.

No room for diplomacy.

The broadcaster observed on similar divisions on social media, with one user accusing Iranians of suffering from "Stockholm Syndrome" for mourning the general.

Taking a more detached view, Iranian commentators abroad took the incident as a strategic challenge to the regime and its leader, Ayatollah Ali Khamenei. Ali Sadrzadeh wrote on Radio Farda, part of Radio Free Europe, that Khamenei was mistaken if he thought President Trump would shy away from war because of upcoming U.S. elections. Any action by Iran, he wrote, would prompt a "heavy" response. He observed that Khamenei was keen to stay in power and must know that war with the United States could "burn down the house."

Another commentator, Ali Afshari, an exiled former student activist, wrote on the same website that the Islamic Republic usually responded to such hostilities "asymmetrically and without haste," and had weaknesses to consider now, including opposition to its influence in Iraq and Lebanon, and a half-battered economy that have prompted popular protests in recent months.

Whatever happens, it's clear that the stakes for Iran and its leaders couldn't be higher. Kayhan newspaper was already hinting at the need to tighten controls on commentary, accusing social networking sites of engaging in Soleimani's "proxy assassination" through hostile propaganda, and urged leaders to push ahead with plans to restrict the internet inside Iran. As for outside the country, the same its editorial made it clear to moderates that with "this act of war," there was "no more room for any diplomacy with the United States."

Fariba Adelkhah, a French-Iranian expert on Shia society, has critics on all sides. Since June, s...

After the U.S. assassination of General Soleimani and Tehran's accidental shooting down of a Ukra...