Libya's War Wounded And Promises Of An Italian Hospital

MISRATA — This Libyan coastal city is bearing the brunt of the ongoing offensive to defeat the Islamic State in its nearby stronghold of Sirte. Flooded with hundreds of injured people streaming in from the fighting, its recently renovated central hospital is buckling under the pressure.

With only 120 beds, two operating rooms, and a lack of trauma specialists, Misrata's hospital is overwhelmed every time a new wave of wounded arrives from the battlefield, forcing it to discharge other patients not in critical condition.

In the face of the extreme conditions, doctors and patients here alike all ask for the same thing: the "Italian hospital."

Misrata's residents had been promised an Italian-run field hospital with its own team of surgeons to alleviate the emergency, but continuing delays are fueling resentment towards Italy.

Italian diplomatic sources claim the hospital will open in a matter of weeks and that it will be built at a site near the airport. Misrata's city council also confirmed that a team of Italian technicians arrived two weeks ago to inspect the location, but there's still no trace of construction workers anywhere at the building site.

"The final decision is in the hands of the mayor," says Ramadan Mohammed Maiteeg, head of the city's media office. "Until then work cannot begin."

Dr. Abdulaziz Issa, who works at the central hospital, says that since May 5 some 3,000 wounded and 52 dead have been brought here. When patients arrive at the overworked emergency room, they're divided into three categories based on their condition: mild, medium, and life-threatening. When too many injured soldiers and civilians arrive, the hospital tries to free all the beds it can by sending home patients in "mild" condition.

Those with the gravest injuries are often sent abroad for treatment if nothing can be done for them here. So far, 26 patients have been sent to Italy. Despite the anger over the delayed construction of the Italian hospital, there is still some local goodwill towards Libya's former colonizer for sending two C-130 planes carrying medical supplies. Turkey is also giving aid to the city, contributing medical teams to the humanitarian effort. 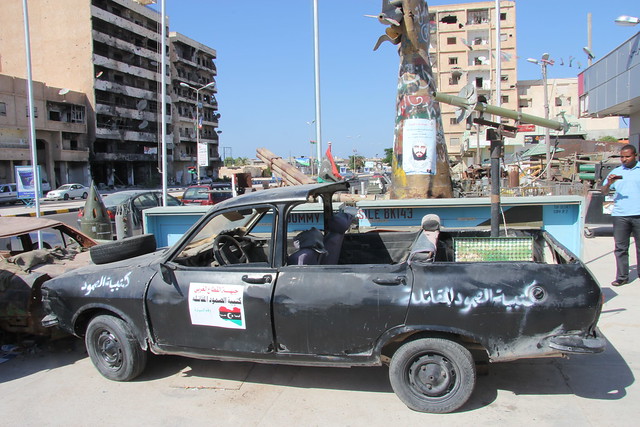 Even with this help, Misrata's central hospital remains in crisis. Dr. Issa estimates there are only around 150 nurses left, most of them Sudanese, while medical students like Khalid Tirlib are also lending a hand where they can. Last Saturday, 30 new patients arrived – 21 of them are still hospitalized. They describe a war of traps and trickery, like the car bomb covered in a Libyan flag that struck Mohammed al-Forjani, a 22-year-old economics student and fighter in the local militia.

The medical students repeat the same request as their superiors. "The only thing we're missing in this war is help for the wounded," says one. "Please give us medical supplies and a bigger hospital."

The hospital's lack of beds hampers the war effort, as it takes longer to treat wounded fighters and get them back to the battlefield. Ironically, there's a facility beside the central hospital that would solve this problem — 85% complete with 420 beds and eight operating rooms — but construction has stalled and the buildings are coated in dust.

"It could be finished in six months," says Dr. Issa. "But the construction companies refuse to resume work until they're paid, and the central government in Tripoli won't send the funds."

The national unity government in Tripoli, headed by Prime Minister Fayez al-Serraj, is currently locked in difficult negotiations to form a new executive and is unlikely to answer to Misrata's needs soon.

Rumors have been circulating for two months that the fight against the Islamic State in Sirte is coming to an end. Disappointed at the Italian hospital that's yet to be built, the people of Misrata are, at this point, wondering what will come first: the hospital, or peace.

BENGHAZI — They call it the "Café of the Displaced," and it's always full. "It's because my customers followed me here," says Ahmed, a smile on his face as he pours a clever blend of coffee, ...

SIRTE — If it were theater, it would be bad theater. Too incongruous, too unreal. The stage — buildings in ruins all along the boulevard — just doesn't fit the happiness on the ...