How Egypt Is Trying To Quash January 25 Anniversary

CAIRO — Egypt's security forces have made a series of moves to thwart any attempts to collectively commemorate Jan. 25 in downtown Cairo, where it all began five years ago.

Government officials and the Endowments Ministry have warned people against participating in protests Monday to mark Jan. 25 this year. And President Abdel Fattah al-Sisi also warned against it, suggesting a new revolution would destroy the country.

Even state meteorological authorities had warned against taking to the streets on Jan. 25 due to bad weather forecasts. (Skies on Monday were partly cloudy with no sign of inclement weather, according to the Weather Channel)

On the ground, police conducted arbitrary searches in 5000 apartments in the downtown Cairo area in the weeks preceding Jan. 25, according to Interior Ministry sources. They entered homes, looking through laptops, tablets and phones for anything suspicious.

Hassan Abdel Aziz, whose name has been changed for security purposes, describes how his whole building was visited by the police. He wasn't home at the time, but a friend of one of their flatmates was home and told him that when the police came in they didn't show a permit, proceeding to search the whole apartment, turning it upside down and going through phones, computers and personal items in the bedrooms.

"They stayed in the apartment for a couple of hours. In my room they found a lot of books. They started asking questions like, â€˜what is your friend doing? Is he a socialist? Is he a political activist? What is he doing? Was he in the revolution?'," Aziz recalls.

The police confiscated his passport after finding the books in his room. "I feel like this is your private space and its been violated. You don't know if it will happen again or not," he explains.

Aziz hasn't been back to his apartment at night since the raid, staying with friends and outside of downtown. He says that as soon as the month is over he will move somewhere that he feels safer.

Martyrs of the Revolution in Tahrir Square. — Photo: Sherif9282

Another eyewitness, who also requested to remain anonymous, says several members of the police were waiting for him when he arrived at his flat. They went through all of his belongings and those of his friend, who is a doctor and has nothing to do with politics.

Magda Aly, a citizen who lives downtown, posted on Facebook that he was too afraid for his children to stay in downtown after dark. "People who live in downtown had a terrifying night … security forces were entering and searching whole buildings in downtown … I don't ask for a lot, I don't ask that they don't arrest me as long as there is an official order ... Call me on the phone, tell me to go and I'll go, without having to escape with my children in the street during cold winter nights, because I don't want them to enter my flat and frighten my children," he says.

A security source told the Reuters-affiliated Aswat Masreya news website that 47 foreigners from Europe and Asia with expired visas were arrested, as were 65 Syrians and Libyans who entered the country illegally.

One of the raids led to the arrest and detention of prominent doctor and activist Taher Mokhtar, along with his housemates.

Mokhtar's housemate Amir Nader, a freelance journalist who was out of the country at the time, says, "They raided our apartment and arrested Taher, Ahmed (Istakoza), and Hossam Eddin. Even though the police initially said the arrests were based on intelligence, I believe it was part of a sweep of the downtown area in the run-up to Jan. 25. It's a method we have seen the Ministry of Interior employ before to control the neighborhood, but never with such ferocity."

Nader says police searched their apartment for two hours and found leaflets calling for better medical treatment of detainees, which made them assume anti-state sentiments. Mokhtar and his housemates were taken to Abdeen police station, and were charged the next day with possessing materials calling for the downfall of the state. Mohktar, Ahmed and Hossam Eddin remain in custody.

"I am afraid to return to Egypt from Europe," Nader says. "I've done nothing wrong, nothing more wrong than my flatmates, but I was told the police were asking about me and I have enough belongings in my room related to my work that I worry my name is on a list somewhere. I will not return to Egypt until after the anniversary of the revolution and when we have an idea of how my friends' case develops."

The home raids are not the only fear tactics security forces are using to secure downtown ahead of the Jan. 25 anniversary. Several downtown art and cultural spaces have also been raided or closed in recent weeks.

Security also shut Townhouse Gallery for contemporary art and its adjacent performing space, the Rawabet theatre, on December 28, both of which remain closed. A Townhouse employee, who wishes to remain anonymous, says authorities haven't given them a reason for the closure, asserting that every administrative issue Townhouse has been asked to resolve, they have.

"One can only assume it has something to do with the paranoia surrounding downtown with all the raids that have been going on in private apartments and the searches on cafes," the employee says. "There's a general attitude of closing down any spaces that might intentionally or unintentionally get crowds rallied up." 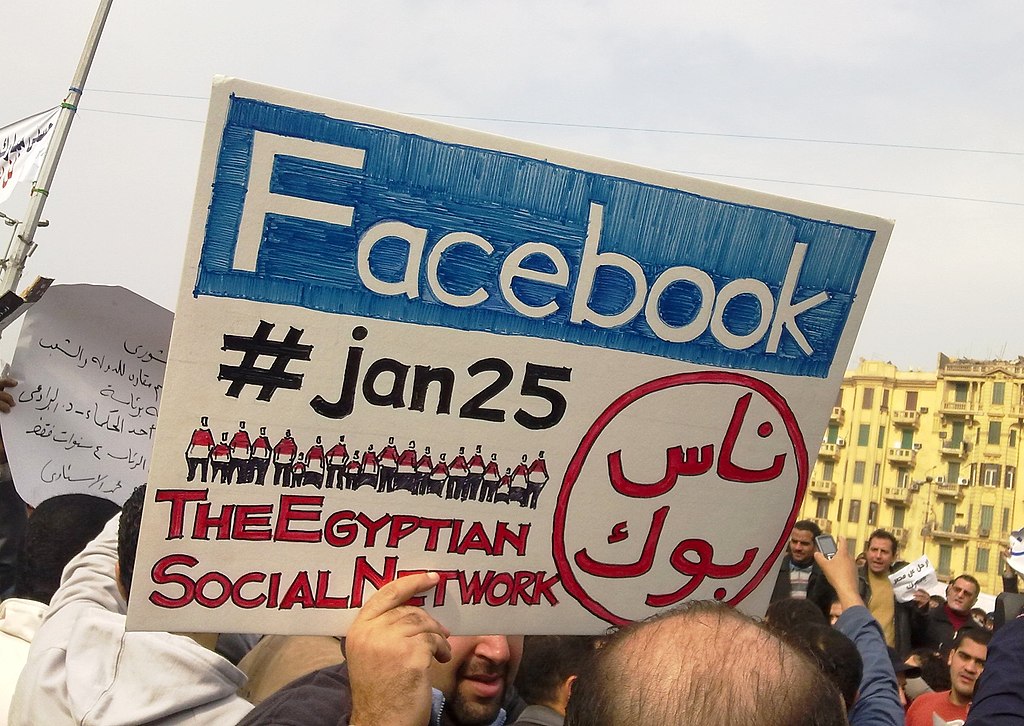 Back in 2011, the word spread on social media. — Photo: Essam Sheraf

The crackdown on such spaces in downtown didn't just begin a week ago. Each anniversary has been marked by a number of security measures.

According to the Health Ministry, at least 29 people were killed and 176 others were injured on Jan. 25, 2014, with 450 arrested. In 2015, commemorations of the anniversary were banned in the wake of the death of Saudi Arabia's King Abdallah Bin Abdel Aziz on Jan. 23. According to the Health Ministry, security forces killed 18 protesters, injured 52, and arrested several others in 2015, with 68 people fined for illegally protesting.

"The raids in downtown Cairo are part of a wider campaign that not only targets people who are actively political, but also those who have the potential to be, and are therefore a threat.," says Nader. "Closing cultural centers, arresting Facebook page administrators, telling imams to preach that it is religiously forbidden to protest, in every sphere Egyptians are being intimidated into silence and acceptance."

Abdul Aziz's says his displacement makes him think about the words of French philosopher Jaques Ranciere, who asserted that police control over space signifies a control over politics in general. Ranciere wrote in "Ten Theses On Politics," that forcing people to be constantly moving and not to linger in one place for too long is a method of control. Politics, he says, is about ending this forced movement, and allowing for a space in which the people reappear.

Egypt's longest-serving president, ruling from 1981 until 2011, has died at the age of 91. From humble beginnings to iron-clad rule of the largest Middle East nation.

Regrets And Solitude From An Egyptian Lesbian Turning 40

"Where do we go to die, when we have lived thousands of lifetimes in a world that was not made for us?"