With a socialist government in Argentina and Brazil's arch-conservative president cold-shouldering each other, private initiatives could restore some cordiality to a relationship that is strategic for all of Latin America.

BUENOS AIRES — Relations between Argentina and Brazil are at their lowest, most fragile point since both countries transitioned to democracy decades ago. A year ago after assuming the presidency, Brazil's Jair Bolsonaro declared in an interview that Brazil would seek "supremacy in South America."

Late in 2019 Brazilian Foreign Minister Ernesto Araújo warned of a communist threat against Latin America, which he said would try and "strangle" Brazil. In October, Bolsonaro warned that a victory by leftist candidate Alberto Fernández would "entirely threaten" the Mercosur regional trading bloc.

In 2020, with Fernández now sworn in as the new Argentine president, we should consider the following:

1. We face an excessively ideologized Brazil that has revived its old, hegemonic aspirations in the region, with particular emphasis on a big farming sector that now has more weight than industry, and with added neoliberalism and a big dose of socio-cultural, Christian fervor.

2. For Argentina, the situation is further complicated at a time of particular vulnerability and pressed as it is by enormous, domestic and foreign challenges. Argentina should not be deepening its decline right now, but working hard to reverse it in coming years.

3. Over time, Argentina has been losing (through action, inaction or negligence) soft-power assets and leverage, and become less relevant to Brazil in several areas. If this continues, the Argentine-Brazilian relationship could lose its strategic sense for both sides, though that would harm us more.

We must all reflect with sincerity on the real state of relations between Argentina and Brazil. It seems the last, conservative government believed its mere existence signified harmony, and overlooked the profound changes happening in both countries. Another point to consider is that conventional, inter-state relations are insufficient today in tackling the enormous challenges bilateral relations throw up. All of this should push us to urgently demand, stimulate and deepen "citizen diplomacy."

As the peace-building specialist Kristian Herbolzheimer notes, citizen diplomacy is a relatively recent concept without a single, universally accepted definition. It is broadly taken to be part of a strategy to solve problems, and especially mitigate difficult relations or situations. I understand citizen diplomacy to be the type of diplomacy in which non-government, non-armed groups have a complementary role to the state's. They engage in legitimate dialogue with various counterparts outside, and forge innovative alliances with civil society in other countries, both in bilateral and multilateral form.

It disproves the monolithic and ambiguous notion of the national interest.

Citizen diplomacy has been gaining momentum since the 1990s, aided by such dynamics as democratization, globalization and integration. It focuses mainly on influencing governments and inter-governmental organizations with lobbying and negotiations. This diplomacy requires deep knowledge of the public agenda (both internal and international), being prepared to act outside national frontiers, the ability to move resources, a certain degree of autonomy and above all, the credibility that allows one to talk to the various sides. 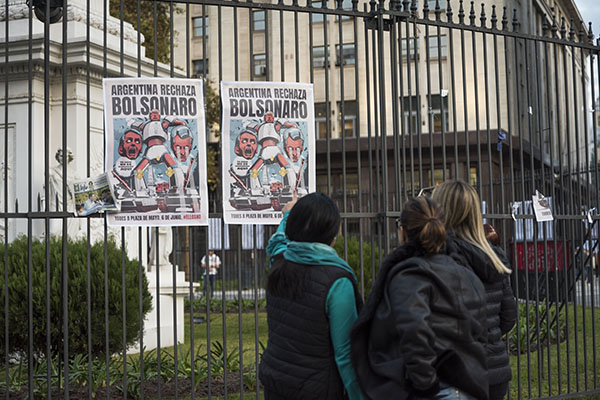 Citizen diplomacy disproves the monolithic and ambiguous notion of the national interest, as there are diverse interests in countries that can express themselves inwards or outwards, and gain or lose strength. In that sense, it is fundamental to understand the configurations and scope of the dominant political economy in each country. It also shows that asymmetrical relations between nations can be somehow compensated with mobilized, active citizens who complement traditional diplomacy and raise the weaker side's maneuverability.

Successful citizen diplomacy is one that can establish cross-border networks and coalitions, create strong social interdependencies abroad, influence public opinion inside the country and abroad, expand collaborative ties with peers in different countries and contribute to rebuilding and improving ties between states.

The Argentine government should in turn commit to giving significant backing to efforts to update and boost citizen diplomacy.

Today, renewed deployment of citizen diplomacy toward Brazil may be just what this country needs. Politicians, businessmen, workers, scientists, NGOs, youngsters, women, universities and communicators could organize themselves more at home and project themselves in both countries, to help put the states' relations back on track.

One should first and foremost understand the scope of what is at stake, now and in the future, in Argentine-Brazilian relations. The Argentine government should in turn commit to giving significant backing to efforts to update and boost citizen diplomacy. Conventional diplomacy alone is no longer enough to regenerate the culture of friendship between Argentines and Brazilians.

*Tokatlian is Professor of International Relations and vice-chancellor of the private Torcuato di Tella University in Buenos Aires.