Armenia And Azerbaijan, A Fragile Truce After 25 Years

May marked the 25th anniversary of the ceasefire that ended Armenia and Azerbaijan's war for the territory of Nagorno-Karabakh. It wouldn't take much to reignite fighting.

DZHODZHUG-MARDZHANLY — This village doesn't appear on maps or on Google. Old satellite photographs show just a few scattered roofless houses. Dzhodzhug-Mardzhanly, a village in the disputed territory of Nagorno-Karabakh, was victim of the war fought between Armenia and Azerbaijan over this mountainous region in the South Caucasus in the early 1990s — a conflict that Armenia won. From 1994 to 2016, the village lay in ruins. But in the last three years, Dzhodzhug-Mardzhanly is very much back on the map.

During an outbreak in fighting in April 2016 Azerbaijani troops captured nearby Mount Leletepe, and the village was subsequently settled and rebuilt at a cost of $16 million. Dzhodzhug-Mardzhanly is now a propaganda trophy for Azerbaijan, a symbol that the republic has the resources to recover and rebuild its lost territories, while large parts of Nagorno-Karabakh remain uninhabited and in ruins.

Armenia brushes off the boasting, saying that Dzhodzhug-Mardzhanly had in fact been on the Azerbaijani side of the front since 1994 and that it was even inhabited, by a farmer named Oktai Gaziev and his family.

"I'd see Armenian patrols on the mountain," Gaziev told Kommersant. "They'd shoot at my house every day without bothering to figure out if there were civilians or soldiers there." However, he admits that there were army positions in Dzhodzhug-Mardzhanly, which have now been moved further forward. On the edge of the village a sign reading "Landmines" warns not to go any further: the Armenian positions are just 700 meters away.

Until 2016, Oktai Gaziev's children went to school in the neighboring village of Kazakhlar, and had to go to the nearest town to visit the doctor. Now Dzhodzhug-Mardzhanly has both a clinic and a school, and Gaziev's house is surrounded by new ones — granted to returning inhabitants of the village, which now has 503 inhabitants, half of its pre-war population. "The state helps all returning residents of Dzhodzhug-Mardzhanly, and even gives them livestock," says Totyg Nasyrov, deputy head of the district administration.

"We periodically hear firing, but that doesn't concern us — it's far away," says a local beekeeper named Makhmud. "We've come back home, and we're not going anywhere."

In the local school, Azerbaijan's leader Ilham Aliyev looks out from a poster. "The April war brought us a glorious victory. Mount Leletepe is the symbol of our heroism," it reads. The school's headteacher Zamin Khaziev says that the children are trying to learn about humanism, "but they also watch television and understand what is going on."

The seeds for the conflict were sown by Stalin.

It's been 25 years since Armenia and Azerbaijan signed a ceasefire ending a six-year war for control of the territory of Nagorno-Karabakh. The seeds for the conflict were sown by Joseph Stalin, who allocated the region to the Azerbaijan Soviet Socialist Republic in 1921 despite it having a population that was 94% ethnically Armenian. The conflict resulted in the proclamation of the Republic of Nagorno-Karabakh, a de facto Armenian protectorate that remains unrecognized by international bodies.

The balance of power is much different now, and it is oil-rich Azerbaijan with its modern armed forces that has the military edge. Only Russian mediation keeps Baku from reigniting the frozen conflict by military force.

The head of the Nagorno-Karabkh government Grigory Martirosyan says that the population of the region is 150,000, though Baku insists the real figure is three times less. Nagorno-Karabakh has a state program to support immigrants, which includes the allocation of housing, as well as social security payments. 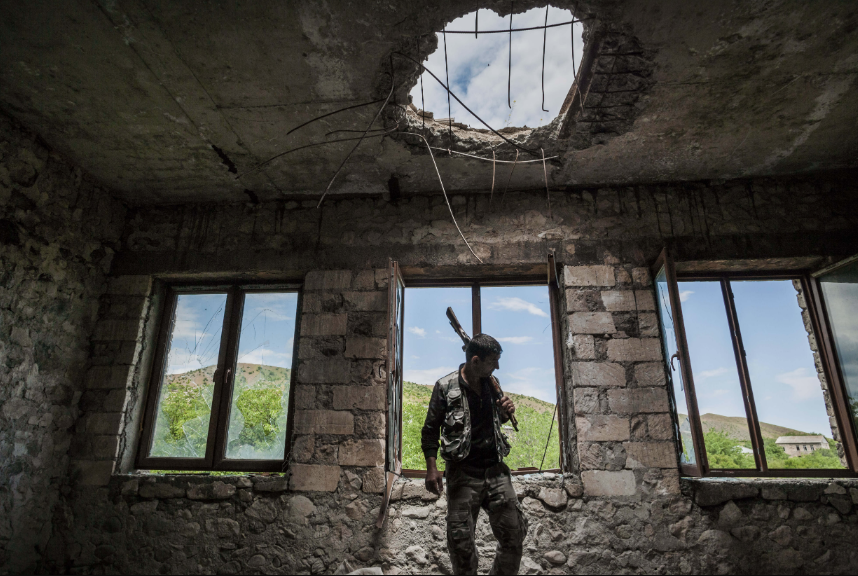 "The population of the republic is growing by 1,000-1,500 people a year," he says. He denies claims that the authorities are moving Syrian refugees in to boost the population, saying there are no more than 100 of them in the republic.

Azerbaijani parliamentary deputy Rasim Musabekov says Baku estimates the cost of rebuilding the entire territory of Nagorno-Karabakh at $27 billion. While this is not an obstacle for oil-rich Azerbaijan, it's a figure that struggling Armenia can only dream of.

Attitudes are confused on both sides of the front. "People have almost completely lost faith in the peace process," says Armenian sociologist Ovanes Grigoryan. "The tougher the Azerbaijanis talk, the tougher (Armenians) are prepared to react. On the other hand, the majority of people surveyed believe a peaceful resolution is the only way."

Despite an enduring climate of hostility, Armenian Minister of Foreign Affairs Zograb Mnatsakanyan and his Azerbaijani counterpart Elmar Mamedyarov announced a campaign to "prepare the people for peace" in Paris in January. This was followed at a meeting in Moscow in April by an agreement on concrete steps to facilitate mutual visits by journalists and family visits for prisoners.

In the absence of mutual trust, and lacking Baku's economic clout, Yerevan is openly trying to improve its negotiating position. Immediately after his election as prime minister in May 2018, Nikol Pashinyan announced that he would insist that representatives of Nagorno-Karabakh are included in negotiations.

Let the goal be abstract for now.

Baku, however, has made it clear that this is unacceptable. "It is the Republic of Azerbaijan that is the Republic of Armenia's opponent in this conflict," says Foreign Minister Elmar Mamedyarov. "This format was confirmed by a decision of the Council of Ministers of the СSCE [Conference on Security and Co-operation in Europe, the predecessor of the OSCE] on March 24, 1992. That's the reality. Everything else is either wishful thinking or attempts to drag out the regulation process under a contrived pretext."

Armenian parliamentary deputy Mikael Zolyan says both sides should put aside any specific discussion of a resolution for the time being. "Any detailed breakdown now will only do harm, so let the goal be abstract for now — peace," Zolyan says. "Later, when there hasn't been an incident on the border for two-three years, we can take the next step."

Azerbaijani deputy Rasim Musabekov is extremely skeptical about the intentions of the parties to rebuild mutual trust. "If you don't want to do anything, that's when you start talking about these things. Peace has only been achieved where there was either war or an extended confrontation," Musabekov said. "If Moscow's position means that we are unable to wage war for victory, then we will continue to harass Armenia. But we certainly aren't going to back down."