Argentina's Prohibitive Presidential Front-Runner, In His Own Words

An interview with Peronist candidate Albérto Fernández, who together with his running mate — former president Cristina Kirchner — is looking to unseat Mauricio Macri.

There are still two months before Argentines select their next leader, and depending on the outcome, there could also be a runoff in December. But after last week's PASO — as the country's primary-election mechanism is known — there is a widespread perception that voters have already made their choice.

The decade-old PASO system is particular in that it involves all of the country's parties and potential presidential candidates, and is thus more of a preview election than a simple weeding out process. In this case, the Aug. 11 vote also proved to be something of a spoiler given the disparity between the top two finishers: Peronist candidate Alberto Fernández and current President Mauricio Macri.

Polls predicted that Fernández would top Macri in the PASO, but not, as it turned out, by more than 15 percentage points (47.7% versus 32.1%). As a result, many now see the Oct. 27 presidential election as a done deal, and view Fernández as a kind of de facto president-elect. The fact that none of this will be official for at least another nine weeks makes the whole process even more curious.

In an exclusive interview with Clarín, the Peronist candidate opens up about his better-than-expected PASO victory, and looks ahead to October and beyond.

CLARÍN: You haven't won the general elections, but you won the PASO by a large margin. Do you feel like you're the president?
ALBERTO FERNÁNDEZ: No. I'll be president the day the people elect me. That hasn't happened yet. But I do think I'm close, and I think the people have assigned me the responsibility of a president-elect, even though I'm not one. I'm not. I say that because I want to keep campaigning. I want to win over more Argentines. I want a lot more people to join me, because I'm determined to rebuild the country with everyone, without leaving anyone out.

Given the results, how would you call this period until October and December, when the installation of a new administration takes place? Is it a transition?
If the people elect me on Oct. 27 I'll be the president-elect and from then on I'll have the responsibilities that go along with that. [In the meantime] you'd have to ask the [Macri] administration if this is a transition, see how they feel about it. What I think is that the administration is in a difficult place because they've just suffered a serious blow at the polls, and politically, they've been very, very weakened as a result. 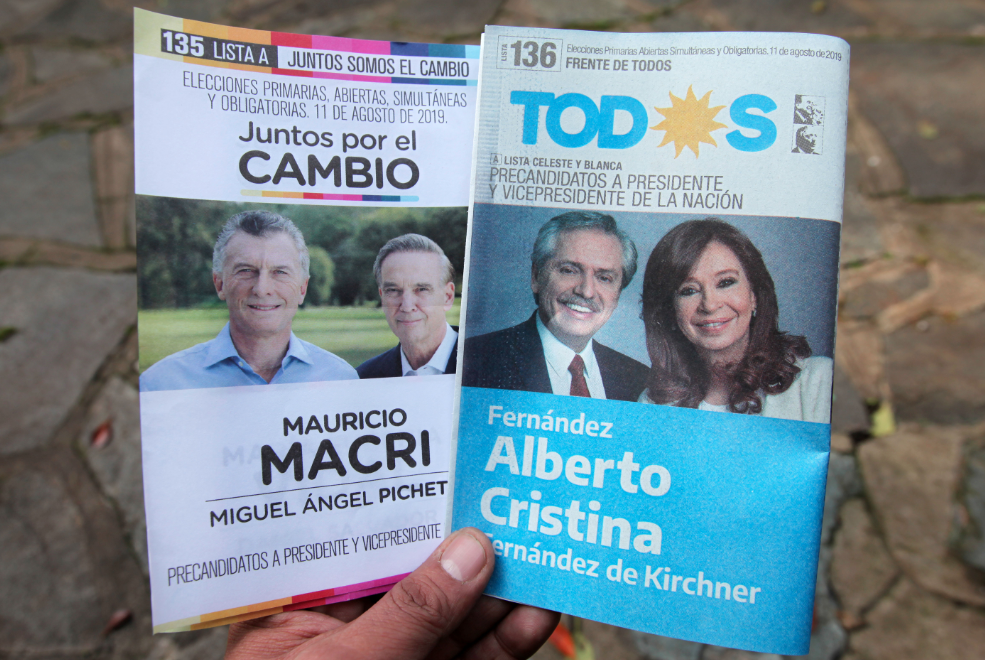 The opposition and other sectors have long talked about how the Macri administration has such a formidable electoral machine. What do you think happened?
What happened is that the administration ended up without a program and couldn't explain anything. That, simply put, is how elections are won or lost. The whole theory that he who controls Big Data gets to decide what is and isn't true is the same theory that says you need a good publicity machine to win elections. But that's false reasoning.

I'm determined to rebuild the country with everyone, without leaving anyone out.

I taught political communications for eight or nine years, and this is an argument I kept having with political consultants. It's wrong to think that Big Data or a marketing campaign can make up for policy shortcomings. It's not true. The secret is having real policy content, and what happened with the administration is that there were a ton of problems they couldn't explain.

So is that why Macri lost — more than the economy?
Argentina's big problem right now is the economy, and the fact that people have experienced a drop in their quality of life because the economy is harming them. The administration's only response has been to blame it on past, but what it didn't realize is that the Macri administration is the past. The past is the four years we've just gone through. That kind of rhetoric is tricky. You can use it when you're just coming into power, but that's not Macri's case any more. He now has a verifiable record, and so he needs to explain the decisions he made. That's when things start to get complicated for him.

*Original, extended version of the interview available in Spanish on Clarín.