Another Consequence Of Kenya's Drought: Obesity

With drought comes malnutrition and a run to the slums, where fatty foods, sugar, and obesity await.

TURKANA COUNTY — Sand and scree wherever you look. Bushes that cling with difficulty to red, dusty earth that has long seen no water.

Turkana County, in northwest Kenya, is home to 800,000 people. About 80% of them are livestock farmers, experienced like no other in breeding animals. People here say that the Turkana can recognize their goats by the hoof prints. The milk their animals produce is inimitably sweet, a delicacy praised far beyond the region.

Since the dawn of civilization, the Turkana have led their flocks over the land and fed them what the earth gave. But over the past two decades, the land has been offering less and less. The rain is sparser, unevenly distributed and unpredictable. Goats, cattle, donkeys, even camels die. "The climate is changing, we cannot ignore it anymore," says Christopher Aletia Imana, the region's Minister of Agriculture. "It has never been like this before."

To save their flocks, people are taking them to even more remote regions, especially near the border with Uganda and South Sudan, where the land is still a bit greener. While the men fight for the last blades of grass, the women and children stay behind with a few goats and chickens whose products they consume or trade for millet.

Four out of 10 people have to walk at least half a kilometer to the nearest waterhole, while 10% walk more than two kilometers, the German organization Welthungerhilfe reports.

"Ngakipi" means water in the Turkana language. The word is ever-present, followed by the complaint that there is often nothing to eat for days. We are only five weeks into the dry season and nobody dares to say whether the women and children will make it to the end without receiving aid.

People have to adapt to the changing climate.

In 2017, the government of Kenya declared the drought a national emergency. Up to 37% of the children were acutely malnourished at the time. Aid organizations came to the rescue, but the emergency is not over yet.

An emergency is when more than 15% of children under five are severely malnourished. "For many years now, we have always been dealing with 15% malnourished children," says Philipp Ewoton, a nutrition scientist at Welthungerhilfe. "The state of emergency is the new norm," adds Kelvin Shingles, who directs the organization's programs in Kenya.

There is something clear here: People have to adapt to the changing climate.

One of those who tries their best is Nancy Apua, 36, a single mother with four children. "My garden needs me," she says, straightening her headscarf.

Her garden: 100 square meters of dry soil, where tiny bell pepper plants, a few corn leaves, spinach, amaranth shrubs, a few pumpkins and above all a sunflower fight for survival.

Planting crops is new for a society based on livestock. Welthungerhilfe has invested in this and other gardens because it wants to give women an independent livelihood. Now Apua fights daily from 7 a.m. to 1 p.m. against drought and pests. "Only this way can I keep my garden in such good condition," she says.

A few kilometers away, the garden idyll is in danger. Women stand around in their community farm and the word "Ngakipi" keeps coming up. What comes out of the fountain is no longer enough for the plants since the animals also use the trickle to drink. In the competition for water, plants are the first losers. 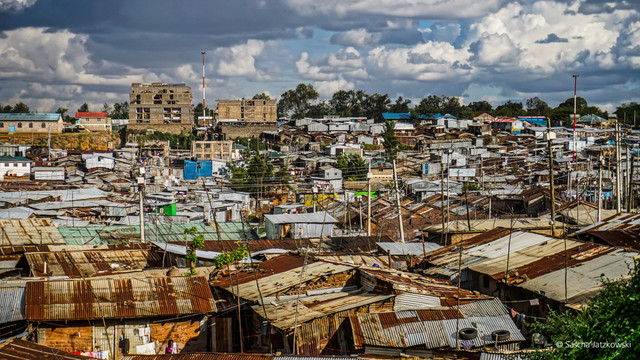 You sense frustration among the women, the feeling there will be more losers, more escapes. People have been moving away for a while to small towns in the region. The boys have moved to Nairobi and Mombasa. And there is where people are getting fat.

At first, it may seem absurd to worry about fat bellies, about people who seem to be doing too well. But this view is part of the problem.

Being overweight is not a luxury problem. It is part of the malnutrition phenomenon that has long been the biggest cause of disease on the planet. One in every five deaths globally is attributed to too little, too much or especially inappropriate food, researchers recently wrote in the journal Lancet.

The proportion of malnourished people has been falling continuously for decades. But in absolute terms, the problem is still huge — currently, more than 800 million people are chronically malnourished.

The problem of obesity, on the other hand, has increased dramatically: 39 out of 100 adults worldwide are overweight, with a BMI of more than 25. Overall, two billion children and adults are overweight, nearly 700 million of them are morbidly obese.

Undernutrition and obesity have been seen as polar opposites. They are both driven by the same unhealthy, inequitable system.

Most obese people live in developing and emerging countries. In Africa, the increase is particularly dramatic, especially since malnutrition is much more complex than commonly assumed.

"Until now, undernutrition and obesity have been seen as polar opposites," says the lead author of the Lancet study, Boyd Swinburn from the University of Auckland. "In reality, they are both driven by the same unhealthy, inequitable food systems, underpinned by the same political economy, that is singe-focused on economic growth." For scientists, the triad of under and over-nutrition and climate change represents the greatest threat to humanity.

Mathare is the second largest slum in Nairobi, with half a million people, many of whom have migrated from rural areas affected by hunger. Their new homes are corrugated iron huts, with narrow paths between them.

The aid organization German Doctors has been running a medical center here for 20 years. The staff treats the usual suspects: HIV, tuberculosis, malaria, malnutrition. However, for about 10 years, employees have observed that obesity, diabetes and high blood pressure are increasing rapidly. In the meantime, 20-year-olds weighing over 100 kilograms come to their treatment room every day, says senior doctor Yvonne Flammer. 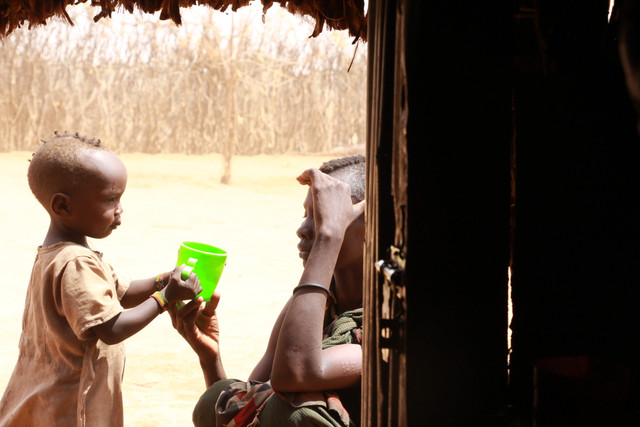 A family in the Turkana region in Kenya — Photo: Welthungerhilfe

The reasons behind this can be understood when you enter one of these huts: 6 square meters — for everyone to live, for all their possessions. There is an open fire for cooking, the stove squeezed into a corner. The air is stuffy, the flames dangerous. There are daily fires in the slums. Here you only cook if you have no other options.

Most people buy ready-made, cheap food on the street: bread, dumplings, and fries, often cooked in animal fat. A different diet would require money, space, and another outlook. "People here struggle for survival, they do not sit down and think about how they can change their diet," says Flammer.

"It is not attractive for people who come from the rural areas, where they had to do hard physical work all their lives," says the doctor. The aerobics class offered by the organization in the middle of the slums has not taken off yet. It is part of a program that offers medical treatment, training and nutrition help for diabetics and patients with hypertension.

Flammer says that she would like to expand the program, but overweight people in distant countries is not an issue that easily opens hearts and purses: only 0.018% of official development funds are spent on obesity and related diseases. In 2016, the total was $32 million.

People here struggle for survival, they do not sit down and think about how they can change their diet.

According to the Lancet authors, $1 billion would be necessary in order to put malnutrition in all of its aspects on the agenda. Another $5 trillion, which subsidizes today's transport and agricultural industries, should instead flow into more sustainable and healthier agriculture. For this to succeed, Big Food representatives should no longer sit together with political decision makers.

While politicians largely ignore the complex implications of malnutrition, the industry has long benefited from it. Even in the tiny towns of the remote Turkana region, people are greeted with red and white lettering on house walls or posters: "Burudika na Coke" — Enjoy your Coke. The corporation knows the thirst of developing countries very well.

**Research for this article was supported by the European Journalism Center's Global Health Journalism Grant Program for Germany.

Can Kenya Cash In On The Global Avocado Craze?

More and more Kenyan farmers are growing avocados, the native Mexican fruit that are both profita...

Soft Power: A Mentor Program To Fight Terrorism In Kenya

In the Majengo district of the southern port city, a mentoring program is trying to stop al-Shaba...