In A Damascus Classroom, Reading, Writing And Trauma

DAMASCUS — Nada, a teacher, starts her classes by asking her third-grade students to express their feelings. She is trained to deal with children who exhibit signs of trauma after living in a war zone for over two years. The school where Nada works is located in the relatively safe neighborhood of Sahnaya, in southern Damascus, but as in the rest of Syria, war is never out of mind.

On the first day of the school year, Nada distributes “face cards” to her class of mostly nine-year-olds, all showing different emotions. She asks them to pick the face that best describes their feelings. She chooses the smiling face, explaining that she is happy to meet them.

“I was shocked and terrified when over 15 students chose the sad face, while most of the rest picked the confused face. The happy children were the fewest in class,” she said.

It became apparent to her that the students who chose the sad face had lost a family member in the war, usually their fathers. Children picking the confused face had either seen a relative or friend die, or had fled their homes.

“It will be a tough [school] year due to the large number of orphans and children suffering from trauma,” Nada said. “This will definitely affect their academic progress, especially as they turn violent because of [their condition]. In addition, most live in financially dire situations and many come to school without having breakfast. And they are unable to buy the [needed] school supplies.”

The psychological trauma experienced by average civilians, including children, is often overlooked by international organizations struggling to provide them with enough basics, like food and water. Thousands of children who have lost family members or witnessed violence or displacement could be susceptible to shock and depression.

Samer, one of Nada’s students, said that his father had been “martyred” three months prior. “We are four siblings. I’m the eldest and my younger brother [is still crawling]. My mother started work at the clothes shop so she could provide for us. My father’s pension is not enough.”

Some of the children live in shelters, several families living in one room separated only by a curtain that fails to provide any kind of privacy. “Life is no longer bearable,” said Sirine, a seventh-grader at Nada’s school. “After my father was killed in the [Yarmouk] camp, we had to move into the shelter home. We share our room with a mother and her small kids. They cry a lot, and I can’t sleep or study. I asked mom to get us out of here, but she’s always crying. She can’t rent us our own place. If dad were alive, this wouldn’t have happened to us.”

Sirine’s mother makes food at a private shop at their group shelter. Her salary, along with the few provisions given by the government, is barely enough for them to make ends meet.

A 10-year-old student named Amer visited his father’s grave the year after he was killed. Amer’s mother had thought that one year was ample time for her son to adjust to the idea of death, after she had previously stopped him from going to see his father’s grave.

Amer’s father always pampered him, and the two were closely attached. After visiting the grave, Amer fell into a deep depression. “After we got back from the cemetery, he went straight to his room and didn’t talk to anyone,” his mother said. “He barely eats, and he refuses to go to school or play with his friends. The only thing he does now is draw graves. He wouldn’t stop drawing his father’s grave and writing how much he missed him. Then he started drawing graves on the walls in his room.” 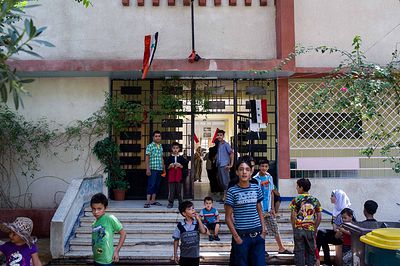 The students aren’t the only ones feeling the psychological effects of what they have seen. Syrian mothers and wives have lost their husbands or partners and are now the sole supporters for their families.

Shadia, an employee in the private sector, has breast cancer. Her husband was killed in the beginning of the crisis and she takes care of her three children alone.

Her eldest is in first grade, while the other two are still in kindergarten.

“I am alone, and I feel as if I’ve aged 10 years overnight," she said. “My life is getting more difficult. My children need me and I need someone to take care of me. My husband’s death was catastrophic. The little ones don’t understand what it means that their father is dead. They keep asking about him, especially my eldest. The two little ones don’t remember him until they see their friends’ fathers. I can’t help but cry and they cry with me, only adding to my pain. My family and in-laws help us, but no one can make up for the love and care he used to give us.”

A French Kid Dragged Into Jihad, Lingers In A Syrian Prison

An 18-year-old prisoner recounts his departure from Roubaix, his life in a country at war, and his detention with no way out.

Forced To Flee, Kurds In Syria Fear They May Never Return Home

Turkey has forced the Syrian Kurds into an astonishing trap, leaving hundreds of thousands with little choice but to flee.