Welcome To Songdo, South Korea: The Smartest Of Smart Cities

Looking up in Songdo - travel oriented

Many have hailed the innovations of Songdo, a planned community near the South Korean capital of Seoul. But the city, which once served as a set for the "Gangnam Style" music video, also has its critics.

SONGDO — On Saturday morning, Mr. Lee brings the trash downstairs, one bag with combustible waste, the other with organic. His wife is already working at the cafe they own in "Central Park." There are two high-tech garbage chutes — green and red — in the collection point of the high-rise building where the Lee family lives.

Lee holds his identity card over the sensor. The hatch opens. Inside, he places the bags, which he purchased at the supermarket for about fifty cents. At the collection point, there are other bins for glass and plastic bottles and other sorts of refuse. A sign overhead warns: "24-hour video surveillance." Sensors in the garbage chute determine whether Lee has properly separated his trash and used the correct bags. If the machine accepts the deposit, they will be sucked through the pipe system under high pressure from a central station.

This system means that no garbage trucks rumble through the planned community, which belongs to Incheon, a metropolis of three million residents west of Seoul. It's one reason why Songdo likes to call itself "the smartest of the world's smart cities."

Unlike Europe or Japan, South Korea still builds entire cities from the ground up — for example, the de facto administrative capital Sejong. The country has already planned the next "Smart City Korea" with financial assistance from Dubai.

In June, at the New Cities Summit in Songdo, an urbanists conference, Tom Murcott of the New York-based real estate development company Gale International, recounted the early years of Songdo. In 2001 his colleagues had flown in a helicopter with the former mayor of Incheon over a nearby tidal basin. "Can you see it?'" Murcott recalls the mayor saying, as he enthusiastically pointed below. They couldn't see anything. But then the mayor explained his vision, and Gale International signed on to the project: that of building a turn-key city on an artificial island.

Gale brought Cisco, the so-called "plumber" of the Internet, on board. Within a decade, where Murcott's colleagues had once peered at the sea, $35 billion worth of resident and office high-rises had been erected on elevated ground. Around 100,000 people are now living in Songdo, and some 60,000 jobs have been created. Large corporations like the construction group Posco have relocated here. It is forecast that Songdo will eventually be home to 600,000 people.

Cisco is wiring the new city and installing a communications system, which would allow people to contact the municipal administration from their televisions. Additionally, developers have installed 300 interactive security cameras, equipped with emergency call systems. Everything is monitored in a control center with a gigantic data screen.

In Songdo, everything has a "U" in front of it: U-traffic, U-safety, U-governance, U-health, and of course U-entertainment. The "U" stands for "ubiquitous," omnipresent. In other words: Big Brother is here.

There is very little that is recognizably Korean in Songdo.

The eight-lane streets that cut through Songdo are certainly reminiscent of the urban planning dreams of the past. At the New Cities Summit, a sociologist called Songdo "a skyrocketing suburb." The automobile is king, especially electric vehicles. The city has already deployed charging stations for them. There are also bike paths and indoor parking spaces. Despite prohibitions, residents grow vegetables on the undeveloped land.

In Central Park, which Murcott says he built to emulate its New York namesake, a seemingly thousand-year-old palace sits among futuristic buildings. In fact, it is a luxury hotel in old Korean style. Otherwise, there is very little that is recognizably Korean in Songdo — apart from the restaurants.

A bridge spanning more than 21 kilometers connects the Incheon international airport to Songdo, which was thought as an Asian hub for multinational companies. Four international universities have established a campus here. Well-to-do Koreans have bought the majority of apartments, sometimes as speculative ventures. Mrs. Lee and her husband originally come from Seoul. She says that the coastal air is good and the city is safe. She also values the proximity to the airport "although we can only seldom travel, but I have been to Germany twice." Many young families have moved to Songdo. Some say it has the best schools in Korea — they are certainly the newest. 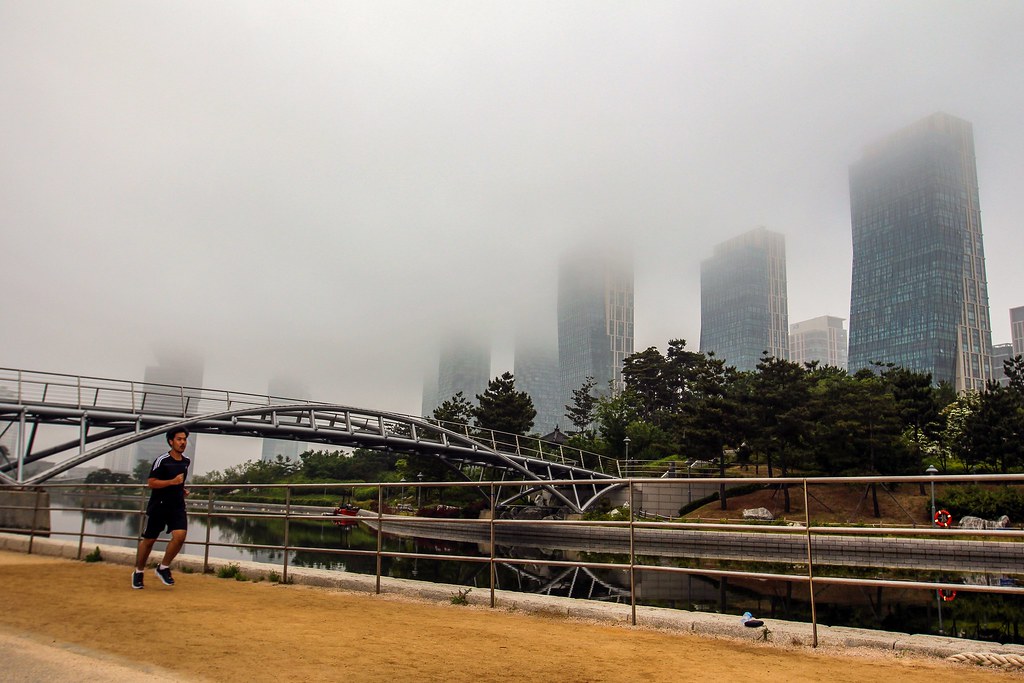 In the interior courtyards of the high-rise clusters, there are playgrounds and fitness stations, benches and plant-lined pools. Mothers photograph their children. There are bronze statues of musicians scattered about.

Songdo was planned to be a model for the future. According to a UN report, by 2050, there will be 400 million more people in Indian cities, almost 300 million more in China, and 200 million in Nigeria. Consequently, these three countries together will need to build a new city every month equivalent to the size of Munich. No wonder that Chinese mayors make a pilgrimage to Songdo to study it as a model.

Opinions of Songdo are divided. At the New Cities Summit, the city was criticized as pedestrian-hostile and sterile: a typical top-down project that never thought to inquire about residents' needs. Today, good urban development takes such input into account during the planning stage. By contrast, the city's founding fathers and developers celebrate Songdo as the self-evident future. More than half of all urban spaces where humans will live in 2050 have not yet been built. Therefore, it's vital that construction companies and authorities get urban design right. And Songdo has done much correctly. It was the first city to receive LEED certification, an accolade for environmentally-friendly performance in energy, transportation, trash and water. Songdo separates drinking water and greywater. The latter is used for irrigation, industry, public toilets, and street cleaning.

Psy did not film the music video for 'Gangnam Style' here by chance.

As idealized as the city claims to be, the "Instant City" of Songdo is far from perfect. The garbage collection point in the courtyard of the Lees' high-rise is filthy, like all the others. It stinks. In the next courtyard, the high-tech garbage chute is obstructed. And since Big Brother hasn't fixed the problem yet, residents just leave their bags of trash next to the bin. In front of another collection point is a pile of old furniture. When asked, city authorities admit that the system used to suck the refuse from the proudly displayed, high-tech vacuum to a larger collection point. There, the trash was compact-pressed and transported away by truck. 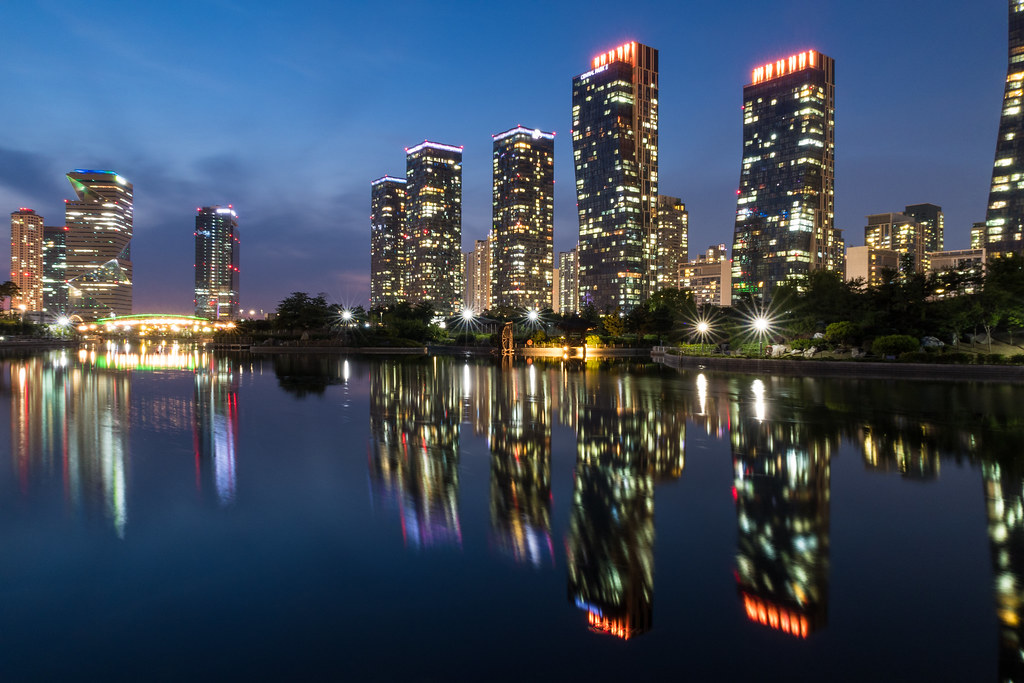 Shortly before midnight, the wide streets are empty. Mrs. Lee has closed her cafe. Here and there, a young woman scurries home, her gaze directed toward her smartphone. A young man whizzes by on his hoverboard, that is, a skateboard with an electric motor and neon-lit wheels. A young couple crosses an intersection on an electric scooter, forcing a quietly approaching limousine to come to an abrupt stop. The night suspends the strict separation between streets and people. The K-Pop star Psy did not film the music video for "Gangnam Style" here by chance: Songdo's synthetic feel drew the singer here. In an ornamental little creek between the high rises, frogs are still croaking. A little life takes over the artificial city.

When A Korean-American Health And Fitness Nut Lands In France

PARIS — Paleo, keto, vegan, pescatarian. There are so many ways we can choose what, and what ...