Zero-Everything! That Modern Illusion Of Life Without Risk

PARIS — Growing crops without the herbicide glyphosate is probably a good thing. Or maybe not. I admit that I have no idea. I'm no doctor, no farmer, nor do I possess any technical competence that would enable me to have an informed opinion on the matter.

On the other hand, I do have a clear notion about the significance of the current, omnipresent, multiform obsession with eliminating everything negative. It manifests itself resoundingly in agriculture, the ideal model of which is to one day produce without pesticides, genetically modified organisms or fertilizers. The trend also reigns in the food industry, which for a long while now has touted products free of preservatives and artificial coloring, glutamate, and increasingly often free of palm oil, fat or even gluten.

But that's not all! Shampoos and shower gels also boast that they are paraben-free, deodorants and other products that they are aluminium-free. Mascaras are proud to be nickel-free and lipsticks, titanium dioxide-free. Like the food industry, the cosmetic industry sells the absence. What matters is not what's in the product; the selling point is what is not in it!

The same, of course, goes for cars, all the more virtuous when they emit no carbon dioxide, use no fossil fuels and, soon, need no driver. The ideal of a life "without" is everywhere: zero-carbon, zero-waste, zero-nuisance.

This is all fine and legitimate. It is only natural to want to try and remove the harmful. Striving to protect consumers's health, natural balances, the planet's resources, or life conditions of future generations is commendable. The whole world — or nearly — has long understood it. The German philosopher Hans Jonas, in his 1979 essay The Imperative of Responsibility, insisted on the dramatic contrast between the disproportionate power of our technologies and our lack of attention to their harmful effects or the precautions they should force us to take. 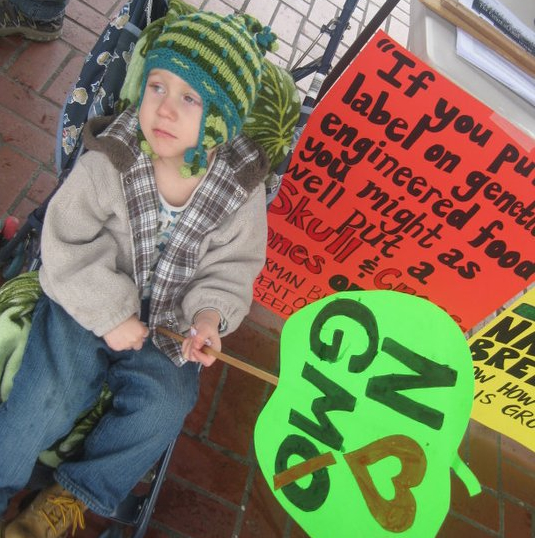 Saying No to GMO in Seattle — Photo: Alexis Baden-Mayer

That we want to eliminate risks is understandable. What should raise concern, however, is the fact that we talk and think about nothing else. It is as if the suppression of what's negative had become the only goal and the only mode of action. This obsession is a symptom.

Look, for instance, at politics: What has become known in France as dégagisme (or "get-rid-ism", as in the getting rid of establishment politicians) has become French politics' sole driving force. What we eliminate seems more important than what we transmit, what we remove more essential than what we have to offer. A representative is good first and foremost because he is corruption-free and scandal-free, rather than because he is full of new ideas. Look at the representation of happiness being sold by magazines and gurus: The happy individual is the one without stress, without conflicts, without problems, without fits, without fears. Look, finally, at the ultimate form of generalized dégagisme: transhumanism. Its defenders dream of a life without death, of a genetic code without bugs, of a human without limits. And one horizon: a tragedy-free life.

Which actually means a life without meaning, since it is devoid of conflicts and combats. This is where the real danger lies, the danger of a disoriented life because it lacks something to fight against, something that enables us to build ourselves and to grow. Our constructions — individual or collective, moral or physical, aesthetic or intellectual — are always built against a negative element. Without this persisting negative element, which must always be contained and restrained, no human endeavor can hold.

It is not about desiring illnesses or death, or about intensifying pollution or encouraging corruption — that would be absurd. While fighting these things, and as we strive to eradicate the identified risks, we must understand that will will never be free of the negative. This is neither damning nor sad; a life that is "without" everything is a more dangerous illusion.

Only by fighting against the negative can life assert itself, exist and blossom. Nietzsche kept saying it, and it is probably his most enduring lesson and his most relevant today: To say "yes" to the world, to life, is to take everything — joy with pain, love with hate, trust with betrayal, birth with death. With, not without!