Why Europe Must Stand Up To Trump On Iran

The U.S. president wants to impose his will and whims on all partners. The EU, for the sake of its own security, needs to resist.

MUNICH — The regime in Tehran is committed to destroying Israel. It promotes terrorism and creates discord in the region, while at home, the mullahs curtail basic freedoms to protect their positions of power. Iran in its present form is not, to put it mildly, a dream partner for democracies.

And yet, the European Union — together with Russia and China — is right to work against the destruction of the 2015 nuclear agreement, even and especially now that the United States is reinstating a first wave of sanctions against the country.

It's not nice to have to form an alliance with the autocrats in Moscow and Beijing to protect a deal with the promoters of terrorism in Tehran. But it's the inevitable consequence of the situation created by U.S. President Donald Trump. It's, in a way, the first global alliance against Trumpism. Whether and to what extent it is successful depends a lot on Europe and the rest of the world.

Preserving the deal is a question of security.

That applies first of all to what the Iran deal was about. The agreement is not the perfect way to prevent the Islamic Republic from developing nuclear weapons. For the time being, however, it's the only one that works. The provisions that the diplomats had spent years negotiating created shackles for Iran that it cannot just throw off, as long as it remains in the agreement. Sure, this doesn't prevent Tehran from continuing to dream of the bomb. But it drastically slows down the possibilities that this dream turns into a reality, which, from the point of view of most of the world, would be a nightmare.

Sanctions have led Iran to submit to this negotiated solution. But sanctions alone have not brought an end to the nuclear program. They won't succeed without diplomacy this time either. Preserving the deal is, therefore, a question of security for Europeans: Rockets could not carry the Iranian bomb to America, but they could hit Europe. 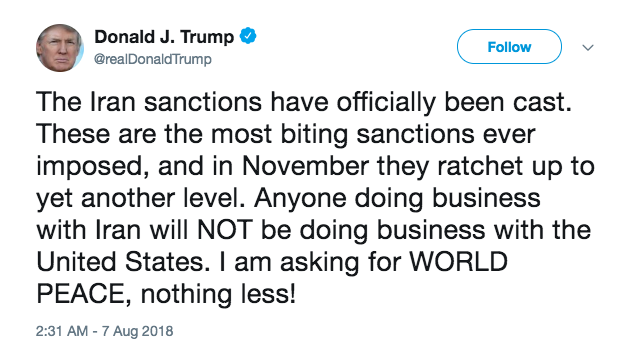 But it's not just Tehran that Europe needs to worry about. Trump is also a threat. This is, ultimately, a showdown — one that will decide whether the U.S. president can brutally impose his will on all partners, and whether everybody surrenders to his lies and whims.

Trump's biggest problem with the Iran deal is that it came from his predecessor, Barack Obama. In Trump's world, deals can only be good if he made them himself. When that's the case, even a North Korean dictator becomes a prince of peace. But if the inflated ego of an American president becomes the sole yardstick, then all reliability and, ultimately, all security is shattered. Against that, we must stand up with all our power.

The EU has got to try.

The question is whether that power is sufficient. The economic power Trump has to enforce his will is almost limitless. The EU is trying to prevent European companies from withdrawing from the Iranian business for fear of being punished by the United States. The chances that this will work are rather slim — but the EU has got to try. For itself, and for the world.