What Paris Has Lost, Reflections Of An Expat Mom

While the world tries to get its collective head around what's happened in the French capital, life here is bound to change. One American journalist, and mother of two, in Paris sees it already.

PARIS — We moved here from Nashville four years ago, and just the other day I was telling someone how safe Paris is, how there's a strong argument for staying here indefinitely because it's such a secure place to raise children. There's far less space than I was used to, which is a constant problem, but on the other hand it's very common for kids as young as nine or 10 to go about the city on their own, via buses and Metro, clad in backpacks and innocence.

But now, when I drop my 5-year-old off at school, there are big guys with bulletproof vests and scary-looking guns standing there on the cobblestones, scanning the streets. It happens to be that former French President Nicolas Sarkozy and his wife Carla Bruni live right next door.

I'd often see Sarkozy jogging with his bodyguards or riding with his driver and going wherever former presidents go in unmarked Citroens, but Thursday — a day after psychotic Islamic radicals murdered 12 people — his security detail was making a definite show of their force. And within the hour, Sarkozy joined current French President Francois Hollande at the Elysée Palace for a show of unity.

The entire world is watching what's happening here in Paris, trying to understand what is, and has been, an issue for the entire globe — the terrifying reality of fanatical Islamists rampaging not just through the Middle East and Africa but also through Western democracies.

Le Monde is characterizing what happened here this week as the "French 9/11." And indeed, from where I sit at this moment, in my little office two blocks from the Charlie Hebdo headquarters, the new reality hits very close to home, just as it did for those who lived and worked in the shadow of the Twin Towers on Sept. 11, 2001.

Yesterday I was editing a German commentary that noted how religious terror has been reborn where the French Revolution took place, that journalists and defiant critics of authority and surveillance can now only turn to authority and surveillance to feel secure. The fact is armed police now guard newspaper offices across Paris. As I was about halfway into massaging this translated treatise, my email pinged.

"School security: Vigipirate," the subject line read. (Vigipirate is France's national alert system.) The missive was from the principal at my other son's school, telling parents, "Toutes les sorties sont supprimées jusqu’à nouvel ordre" — there would be no outings until further notice. No gym class, no swimming, no museum field trips, no recess at Les Invalides or the Champs de Mars, where, until Wednesday, the students would go nearly every day because the school doesn't have its own outdoor space. We're told now not to loiter in front of the school, to email instead of call, to be sure to close the school gate behind us to make sure it locks.

When I picked up my 7-year-old from school after work on Thursday, we walked as usual down rue de Grenelle amid the typical end-of-day bustle of the city. "Mom," he said, "Antonio told me we shouldn't ride the Metro because there are bad guys with bombs." 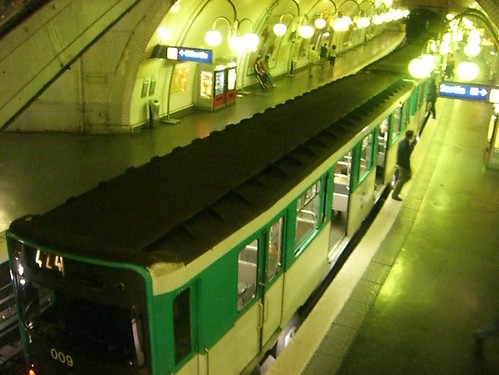 Best way to get around. Still. Photo: jnykpt

I'd had a talk with him that morning — an abbreviated, edited-for-my-audience explanation of what had happened — but I hadn't said anything about IF or HOW we should change the way we go about our daily lives. The best I could do was tell him that the police were chasing the bad guys outside of Paris and that the Metro was the best way for us to get home.

When I got off the Metro at St. Sebastian-Froissart near my office Friday morning, I passed Les Petites Canailles at 80 rue Amelot, the little restaurant where the Charlie Hebdo cartoonists often got sandwiches or sat down for coffee. There were new signs in the windows reading, "Nous sommes les petits Charlie," a slightly more personalized variation of the "Je suis Charlie" meme that is everywhere. I headed a few doors down to my office, also on rue Amelot, where my colleague told me that his son's international school had closed its doors for the day to assess what security measures it should take.

We are full of gratitude that we safe right now, but the Paris of the moment is very different from the one I moved to in December of 2010. Back then, the lights of the Eiffel Tower never darkened in mourning. Back then, I did not stand on the street in the rain with my colleagues for a national moment of silence. I did not consider whether I should take my boys to the silent anti-terror Sunday march at Place de la République.

When we moved here, there was a sense of getting away from some of the far-right nonsense, noise, and bigotry of our home country. As much as we loved the United States then and still do, we were ready for a new culture, to experience the magic of this city, where a historic pageant of behavior and order and rules are rooted in centuries of trial and tradition.

But right here, right now this special place — like London, Madrid and New York — seems to have lost something that took so long to build. We mourn for the innocent victims, and take some brief comfort that the Charlie Hebdo terrorists are off the streets. Still, it feels like this is only the beginning of something dark for us, in Paris and beyond.  And walking my boys to school won't ever be quite the same.

*Liz Garrigan, senior editor at Worldcrunch, was an editor and writer in Nashville before moving to Paris. This piece first appeared in the Nashville Banner.

Greta Thunberg tapped into an growing area of scholarship when she wrote recently that to save the planet, we first need to dismantle "colonial, racist, and patriarchal systems of oppression."

Cash use is declining, but don't expect it to disappear. Still, there is another popular payment method that could in fact go the way of the dodo, a Deutsche Bank strategist argues.