The violent protests that struck Paris last week weren't the start of a new, 1968-style uprising. But people are angry and disillusioned. And that's a problem.

PARIS — "A specter is haunting Europe — the specter of Communism." So argued Marx and Engels, in 1848, in the opening of their Communist Manifesto. The line certainly had its hour of glory. And yet, lest we forget, it was also terribly exaggerated.

By declaring Europe obsessed with the imminent danger of a social and political cataclysm, by describing the continent as being on the defensive, by proclaiming that "all the powers of old Europe have entered into a holy alliance to exorcise this specter," this propaganda was about making people believe that the Communist movement was considerable, when it was actually incredibly weak.

It would be a similar exaggeration to write today: "A specter is haunting France, the specter of May 68." In reality, a few extremists are throwing stones at the police, and multiple sources of discontent are accumulating. But it hasn't produced a united movement. There is nothing there to trigger the slightest apocalypse. Just because this year marks the 50th anniversary of "May 68" — and Karl Marx's 200th birthday (he was born on May 5) — doesn't mean a revolution is coming.

What we are seeing is a reappearance of old fantasies and phantasms — just like in Hamlet. When there is "something rotten" somewhere — which is the case almost all of the time — then we see a ghost return, most often embodying some betrayed virtue. It calls for help, announces that everything is out of line, claims that the disorder must stop. Thus did Hamlet's murdered father return as a ghost to meet his son on the ramparts of Elsinore and demand revenge (act I, scenes 4 and 5).

In 1993, after the fall of the Berlin Wall and the collapse of the Soviet bloc, Jacques Derrida returned to this famous scene in his book Specters of Marx. Against the discourse of triumphant globalization, the philosopher wanted to remind readers that Marx, Communism and revolution would continue to haunt the world; that no matter how dead we thought they were, they would never stop living inside the system, corroding it from within.

First of all, you really have to believe in ghosts to swallow that kind of story.

This was just what people nostalgic still for Marxism and the revolutionary past wanted to hear. The old Shakespearean ghost and the theorist behind the concept of the dictatorship of the proletariat ended up walking hand in hand, in the eyes of a few intellectuals. At least for a while. This made us forget several points, which it is useful to recall today, at a time when some are dreaming of bringing these specters back.

First of all, you really have to believe in ghosts to swallow that kind of story. And not everybody does. Far from it. Hamlet believes he sees his father dead and talks to him. But the queen sees nothing at all. "Do you see nothing there?" asks the son, hallucinating. "Nothing at all," replies the Queen Mother (act III, scene 4). 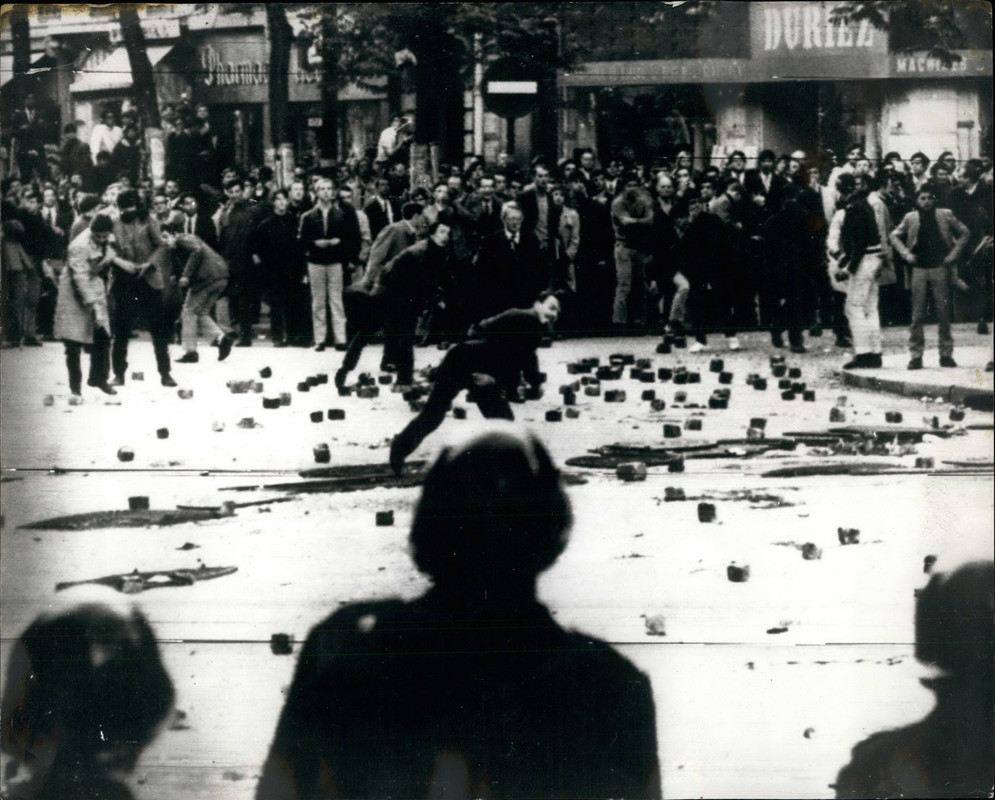 Protest in Paris in May 1968 — Photo: Keystone/ZUMA

Let us transpose: Today we see the specter of May 68 — regardless of whether we're rejoiced or frightened by it — only if we believe in it. Not perceiving it at all is possible, normal even. On the other hand, the hallucinations, being subjective and delimited, are also disparate. To each his phantom-fantasm: The black blocks that went on a rampage in Paris and the trade unionists aren't seeing the same specter of 1968, and the same goes for the nurses and the zadists, the students and the railway workers.

Last but not least, these specter wear out. They erode with time and end up being nothing more than caricatures. Marx observes at the beginning of his The 18th Brumaire Of Louis Bonaparte that, according to Hegel, "All great world-historic facts and personages appear, so to speak, twice." But we must add the following explanation: "The first time as tragedy, the second as farce." After the 1871 Paris Commune, the psychodrama of May 68. And the degradation continues: 50 years after the "farce" of 1968, with the weak sketches we're seeing being played this season.

The only persistent thread in this continuous decomposition is a desire for nothingness, a death drive. In the fantasies of revolution, destroying the old world was necessary. But it was in order to build a new, better and finally just one. Now, though, all that remains is the will to block, break and shatter. Not on the basis of objective data, but driven by the sole, pure and compelling desire to destroy everything.

May 68 was already going in this direction with its explicit project of destruction of the university, of knowledge and of the elites. But there was also a real component of celebration, of free invention and joy that has quite withered among the nihilist commandos of today. That is why there will be no May 2018. Ghosts don't exist, except in funfairs and bad movies.

And yet, there's no reason to be reassured. Because the angers and the frustrations are real, manyfold and diverse. And they are feeding the various specters of populism ... that haunt Europe.