The Catholic Church may have only itself to blame for failing to attract young people.

WARSAW — After the publication of the Pew Research Center's latest global report on demographics and religiosity, many readers of Gazeta Wyborcza shared their own feelings about religion, and about Poland's powerful Catholic Church in particular.

The monumental Pew survey, conducted over eight years in 106 different countries, found that there is an age gap across all major religions: that young people are, in most cases, less religious than their elders. Poland, long a bastion of traditional Catholicism, is no exception. Why? There is history, ancient and not-so-ancient. Also, the long reign of Polish-born Pope John Paul II. But others point an accusatory finger at ultra-conservative Polish priest and media empire head Tadeusz Rydzyk. Here are some of the comments, as sent in by readers using their Internet monikers.

tysiącletni: This data concerns me. When I was just over 12 years old, I went on pilgrimages to Częstochowa (a southern Polish city containing a popular pilgrimage site). Now I am just over 30 and two major factors have turned me against going to church: the nonsense around premarital behavior, and the nonsense I was told in a meeting before my daughter's baptism, when a young priest used the Bible to argue that a woman is not fully human. I couldn't stand it.

zabicdrozda59: I wouldn't put too much stock in these statistics. It is cool now to "not believe." And yet, as young people get older, they'll no doubt go to church and vote in accordance with the message of the Catholic Church. What we say publicly isn't important. What's important is what we do.

I have friends who are first generation college students (both with high degrees from Politechnika Warszawska). They declare themselves believers, attend church, etc. A year and a half ago there were discussions of refugees and immigrants. The bishops were making up heresies as they went — the same gibberish you hear in most Polish churches. I couldn't stand it. I asked my friends why, if they are believers, they did not protest against the obvious heresies — that were contrary to what the Scriptures preach — voiced by the officials. He, roughly speaking, played dumb, while she shook off the question, claiming she wasn't really listening to what the priest said because he was too "soft spoken." The 42% of Poles who claim they go to mass every week are usually just attending a weekly theater performance — nothing more. Even worse, Poles justify a certain intellectual laziness by thinking and voting as the Church commands.

sparrow: I'm afraid the optimism here is premature. The Church's rule in Poland has never been based on any deep religiosity. What does it matter that people do not know the basics of their religion, do not follow its principles and do not pray? This is nothing new. It's only important that they care about keeping the facade. They do not believe in any god, but they will have a religious wedding ceremony and send their children to communion. As long as people want to keep this facade, the Church will rule.

Golduś: I am taken aback by the influx of negative statements regarding why young people are choosing to leave the Church. I am not young anymore, but I have young relatives between the ages of 20 and 30 who are not forced to go to church. Yet they still have their religious wedding ceremonies, gather around God's Word, meet other believers, and build relationships within the religious community and with God. Priests are not perfect. But we do not believe in priests; We believe in God. Yes, there is secularism in general, but let's not exaggerate as many good believers do exist. Be honest and show positivity. Kind regards.

The 42% of Poles who claim they go to mass every week are usually just attending a weekly theater performance.

Tomasz F.: Take, for example, the corrupt management of cemeteries. In small towns there are no municipal cemeteries. Whether you like it or not, you have to go to the local priest to earn a place in the cemetery. In other words, baptism, communions of unconscious children, white dress weddings and religious funerals are required for burial in a cemetery.This is the mystery of faith.

nestor: Poland's only hope for maintaining the influence of Catholicism would be to lead a Catholic dictatorship. And that's what's happening here. Do not be deceived — the Church will not stop at anything, even bloodshed or the passing off of Poland to Russian rule. This is really about the 40,000 affluent men in the Church who would suddenly be deprived of their incomes.

kaczmarek: Money for 40,000 men, their parents, their siblings, their lovers, their children ... The number of church officials is alarming — each congregation employs its own real estate and development workers, lawyers, food and alcohol suppliers, and preachers. A lot of us pay for various religious instructors and spiritual seminars. We maintain their buildings and posts of lecture. The most intriguing fact is that it is impossible to determine just how much of our money goes to the Church. It is not simply listed as a single item on the state budget, but instead is a cumulative amount extracted in small percentages from multiple local governments, state-owned companies and state funds. 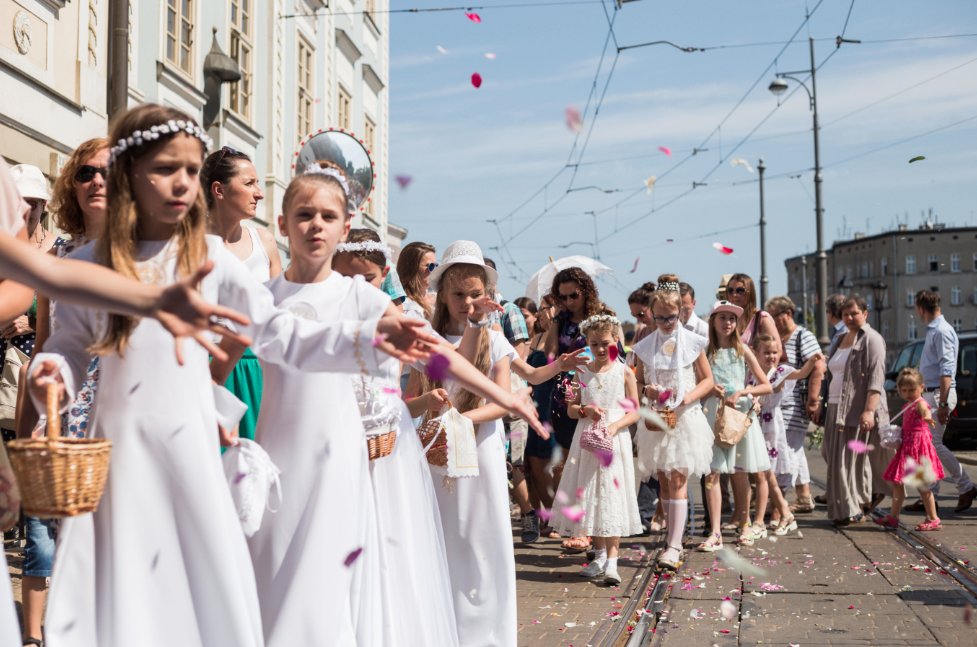 Procession in Wroclaw, Poland, on May 31 — Photo: Krzysztof Kaniewski/ZUMA

Not only is every member of the Church given a portion of this money, but most pay reduced taxes while others pay no taxes at all. I am convinced that the Church, the largest non-state owner of real estate in Poland, will milk us of amounts well over 30 billion Polish zloty [$8 billion] per year — more than 10% of the budget. This is what the fight is about, although the Church does not have an opponent in it, as it has successfully placed fear in politicians at every rank and in the people of Poland.

eriwinkle65: Looking at the photos from the pro-life demonstration in Kraków last Sunday, I noticed a lot of people at the parade on Grandparent's Day with their grandchildren. A handful of young people with a banner looked like they would have rather been somewhere else.

Agata O: I stopped going to church when I was 12 years old. It was because of an incident that occurred one Friday during confession. I told the priest that "I was not at Mass, because I did not want to come." The priest obnoxiously banished me from the church, shouting curses at me in front of a large group of students from my school. My parents instructed me to leave. I walked out of the church door never to go in again. It's been 27 years since those events. I've witnessed priests gossiping about sins they heard during confession. I've stopped believing in God. I don't care about Christmas. I moved to a secular country, where Christianity is the minority to Shintoism and Buddhism. I no longer feel pressure to baptize my son. I am disappointed too that the Church mixes itself up in politics. I lost my childlike trust and faith. Do I feel emptiness? Sometimes, yes, but it is not so easily fixed.

Ephroim "Johnny" Jablon's entire family was gassed to death. At 94, he can't forget the smells an...