Some of the recent racist mass killers were also worried about the degradation of the environment. It's part of a old twisted ideology that mixes love of nature and xenophobia.

PARIS — Patrick Crusius, who killed 20 people in El Paso, Texas last month, and Brenton Tarrant, who killed 51 in Christchurch, New Zealand in March, both justified their actions with a reference to ecology, with Tarrant going so far in his manifesto as to promote "ecofascism."

Still, neither invented extreme-right ecology, which has existed since the end of the 19th century, with a notable presence in Germany. Thus this form of ecology is older than National Socialism. Some Nazis, Adolf Hitler himself, the Minister of Agriculture and SS General Richard Walther Darré, or the regime's number two, Rudolf Hess, voiced concern about preserving nature.

Ecology only really became a major issue for the far right in the West in the early 2000s.

This form of ecology did not disappear with the end of Nazism, quite the contrary: The pastor Werner Georg Haverbeck and Renate Riemeck, medievalist and former secretary of the SS Johann von Leers, promoted it again in the 1970s. At the same time, in France, a former SS member, Robert Dun (real name Maurice Martin), was one of the pioneers of this form of ecology. In 1995, the old anti-Semitic activist and former collaborationist Henry Coston published an essay entitled No! Ecology Is Not Left-Wing.

We could multiply the French, European or even American examples. However, ecology only really became a major issue for the far right in the West in the early 2000s. For a long time, it was considered in these circles as an ideology of "leftists" or "hippies." Ecologists were sometimes referred to as "watermelons," meaning green on the outside and red on the inside.

However, environmentalist themes multiplied in the 1990s, when they merged with traditional extreme right-wing ideologies, including racism. This can be found in the writings of the killers in both El Paso and Christchurch. Each takes up the idea that ecology is above all an ecology of populations: Ethnic groups are perceived as specific entities claiming territories of their own, which themselves are derived from ecosystems. In this sense, their ecology is governed by a "mixophobia," a rejection of the Other, of the Stranger who must remain in his natural environment, in the same way that animal and plant species have their biotope. 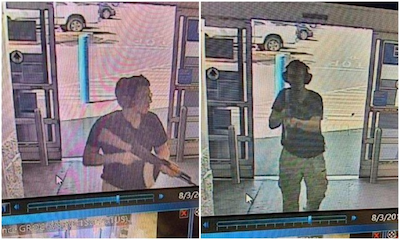 This vision of ecology is often a cover for a segregationist system of thought, with any mixing or contact leading to a loss of difference. It includes an anti-immigration policy, with non-European immigrants having to return "home" to find "their roots" or, for the most racist of these ethnodifferentialists, their "natural environment." This population ecology, not surprisingly, includes the incompatibility of these different cultures.

This vision also promotes radical ecology and opposition to Speciesism, which can also be found in other forms of ecology. Again, this is an old tradition of the far right. One of its theorists was the French neo-Nazi activist of Greek origin who converted to Hinduism Maximiani Portas, better known as Savitri Devi. An ardent defender of Nazism, she was also a radical environmental activist, publishing several books on the subject, including Impeachment of Man, which promotes Malthusianism and the reduction of the world population.

They share the same basic fear as ecologists in general: of the risk of the world as we know it disappearing.

While far-right ecology is almost always radical, both in its promotion of a deep ecology and in the promotion of a population ecology, it is rarely violent. Indeed, far-right militants have made little attempt to get closer to the "ecoterrorists," as we can see in the United States. In the 1990s, the French group Nouvelle Résistance tried to copy the methods of the American activists of Earth First and tried to take control of the French section of this movement, without much success, the latter being only slightly active. The violent militancy of the extreme right feeds mainly, not on ecology per se, but on the fear of the collapse of Western civilization as a result of the supposed grand remplacement (great replacement). In other words, taking (violent) action is not really about ecology but a consequence of the ideology of a supposed race war, and a question of protecting the "white race."

However, the far-right ecology is not cut off from other green trends. In the 1990s, activists from other extreme right-wing tendencies, including the New Right, became members of Antoine Waechter's Independent Ecological Movement (IEM). This was the case of identity activist Laurent Ozon in the 1990s and 2000s. Between 1994 and 2000, he hosted a review, Le Recours aux forêts, an expression of the Nouvelle écologie association, which saw the participation of several important figures from the ecologist movement. There were collaborations between the New Right and Edward "Teddy" Goldsmith, founder of the British magazine The Ecologist. Proponents of degrowth still regularly participate in New Right publications today.

But it is true that extreme right-wing ecologists share the same basic fear as ecologists in general, that of the risk of the world as we know it disappearing because of global warming. They also share the same rejection of the ideology of progress, of "technoscience" and of the hubris that is its corollary. They separate and oppose each other on the relationship to the Other, and more broadly on the relationship to minorities, defended by most ecologists and rejected by the extreme right in the name of their defining logic of identity.

*The author is a French historian, researcher and political scientist.