The future of architecture is here: the studio MVRDV in Rotterdam is one of the most daring in the world. An exhibition in Innsbruck shows why.

Canary yellow, pink, sky blue: this exhibition is nothing if not eye-catching. Four brightly colored towers stretch from floor to ceiling. One is made of boxes stacked on top of each other, another has a ladder inside that visitors can climb, the third houses a container of foam bricks at its base, and the fourth, made of scaffolding, boasts green plants balanced on narrow balconies. Welcome to MVRDV's creative playground.

The architecture studio in Rotterdam is possibly one of the most daring when it comes to innovation and experiments. However, Nathalie de Vries insists, "What we do isn't experimental." The architect founded the firm in 1993 with her fellow students Winy Maas and Jacob van Rijs and curated the exhibition with Arno Ritter, director of aut. architektur und tirol, the Tirolean architecture center in Innsbruck.

"If something gets built, that means it's possible." So why does our urban environment still look less like a playground and more like a series of dull, uniform concrete boxes? Well, there are other reasons.

A lack of optimism about the future, for example. Without this the architects could never have designed the Netherlands Pavilion for Expo 2000 in Hanover. This colorful creation, which made the studio's name on the world stage, consisted of six different landscapes stacked together, topped by wind turbines. What seemed bold, perhaps even utopian at the time – a building that generated its own energy, with tall trees hidden inside – is now a reality. The Bosco Verticale, a pair of towers in Milan, are a veritable forest in the air. In Asia this kind of greenery is a fixture of many skyscrapers. No wonder: not only does it improve air quality, the glimpse of nature also provides relief in a concrete jungle.

From the beginning, the Dutch architects dedicated themselves to one question that today may hold the key to our planet's future: How can we build houses on as little land as possible? Because land is being used up at an alarming rate. In Germany alone, 62 hectares of land are built on every day. Worldwide, the hunger for new land for construction is growing – with catastrophic consequences for the environment and future generations.

MVRDV, which now has more than 200 employees and numerous locations across the world, has found a potential solution: stacking, to combine multiple uses and features into a single building. For the Silodam apartment building in Amsterdam, completed in 2003, the architects layered a whole variety of different accommodation types on top of each other, so that the building looked like the cargo of a huge container ship. Their covered market in Rotterdam, built in 2014, is part of a complex of 250 apartments, with bars and shops on the ground floor. Their library in Spijkenisse stands on a base that houses a cafe, environment center and shops, giving the appearance of a mountain of books piled on top.

Netherlands reclaimed land from the sea. That led to a pragmatic relationship with nature.

For Arno Ritter, MVRDV's special approach to building in tight spaces springs from the history of the Netherlands: "For centuries people in the Netherlands reclaimed land from the sea. That led to a pragmatic relationship with nature." In contrast, he believes Austrians are more attached to a transcendental, aesthetic view of nature espoused by the Romantics in the 19th century. And in Germany too, the legacy of Caspar David Friedrich makes it difficult to establish a new relationship with the natural world. 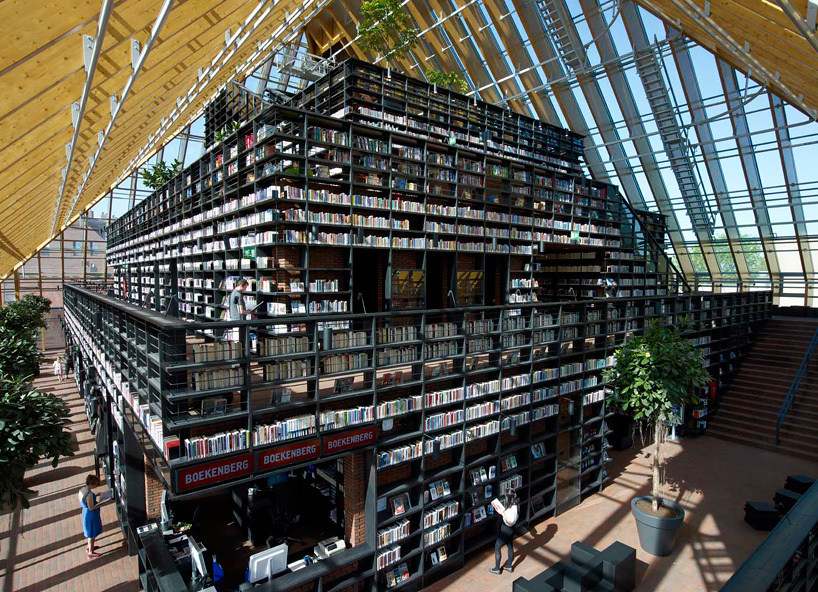 MVRDV also displays a certain pragmatism when it comes to multifunctional buildings. Unlike in Germany, where there is a clear distinction between buildings used for accommodation, work and leisure, the Dutch architects don't have any concerns about multi-purpose spaces. "For us, our buildings are hybrids that have life breathed into them by being stacked together," says Nathalie de Vries, whose studio is also curating Manifesta 13 in Marseille next year. Because different uses – living, working, leisure, education – not only attract different people, but they also ensure the buildings are occupied from morning until night. That makes sense from an environmental perspective, but also from a commercial one. An insight that is not lost on investors from some other countries. In Germany, however, there are still many buildings standing empty for large portions of the day.

What a waste, when you see everything that MVRDV can pack into a single building. And it's not only about stacking. The exhibition in Innsbruck shows how much careful consideration goes into such a complex design. How can the architects arrange even the smallest unit – or pixel, as they call it – so that it is flexible and therefore seems larger to the user? How can they create variety and diversity for the inhabitants, and thereby foster the feeling of a village community on a large, city-wide scale? Finally, how can they bring every element of a house to life, from the roof to the façade all the way down to the basement?

"We expect a performance from every building," says de Vries. Which means it should be an "all-rounder" that generates its own energy, collects data, offers a space to relax, creates a pleasant working environment and also brings the community together in a public place.

It's amazing to see how easily people adopt these spaces. Perhaps it says more about the present moment and the growing need in society for a sense of community than it does about the Dutch architects. Some 600,000 people used the giant scaffolding staircase that MVRDV installed at an old office building next to Rotterdam Central Station in 2016. The staircase created a public living room on the roof, free and accessible for all. Proof that MVRDV's creative approach has created not just a playground, but a political statement.

Boyan Slat, A (Nicer) Elon Musk To Save Our Oceans

The project "The Ocean Cleanup" wants to use its system to rid the oceans from plastic waste. The...

Dutch YouTubers Get High In The Name Of Science — And Clicks

An online show called Drugslab gives viewers a first-hand account of what it's like to take anyth...