In the second installment of a new series of articles to get to better know journalists and journalism around the world, Worldcrunch spoke to Anna Masera, public editor of top Italian daily La Stampa, about the differences between Donald Trump and Silvio Berlusconi, foreign media's focus on the pope and engaging with citizens via social media.

NOTE: If you are a journalist, translator or have an expertise/interest to share, sign up here to Worldcrunch iQ, our new global contributor platform.

What was your most unforgettable experience in journalism?
My first story in New York City at the Columbia University Journalism School in 1984. The story was on thalassemia told through a young Italian-American patient dying in the hospital. It was unforgettable both because it was my first piece, in which I practiced the "show, don't tell" golden rule of journalism, and because it was a very moving first experience to write about suffering.

Is there something you wish foreigners knew about your country?
I wish people were educated about Italy, just as Italians should be educated about other countries. I guess I wish people didn't use stereotypes to identify Italians. Italians are very self-critical and ironic. We're not proud as a nation and not very patriotic except for soccer. But, then again, lately there is a new nationalistic streak due to the economic crisis which fosters fear.

Does this nationalistic streak affect how you view your own country now?
Yes, I don't sympathize. But I am also very sad for Italy's youth, who are leaving the country in search of job opportunities; and for freelancers, many middle-aged people forced to accept very bad economic conditions, and are burdened by Italy's bureaucracy. It's a real plague that hampers innovation.

Is there something that's overlooked in foreign coverage of Italy, especially nowadays considering how much money is being cut from news budgets?
Foreign media in Italy cover mostly the Pope and cliché stories about the mafia, food and tourism. Italy has a lot more to it than that. Like all countries, it deserves more nuanced coverage about its society, economics, politics and culture; but I understand the cuts due to the overall crisis.

Does Trump's handling of the press remind you of Silvio Berlusconi?
Trump seems a lot worse.

How so? Are there ways in which you find them comparable?
Yes, of course: They're both rich, sexist, aging sex-maniacs, populist, ignorant, TV-oriented, corrupt, friends of Putin. But Berlusconi probably never came across as terrible as Trump because, in the world political scenario, he is less powerful. And Italy is Catholic, so the underlying values of the countries are so different. We oppose war by Constitution and ban the death penalty, and we don't carry guns like Americans in the Wild West. And Berlusconi — as opposed to Trump — did manage to create a successful business and jobs, and he got credit for that.

How is La Stampa adapting to the 21st century?
La Stampa is striving to stay relevant in the information society by being original in its coverage, by being on all platforms with suitable content and by trying to be transparent and trustworthy and true to its identity and readership. 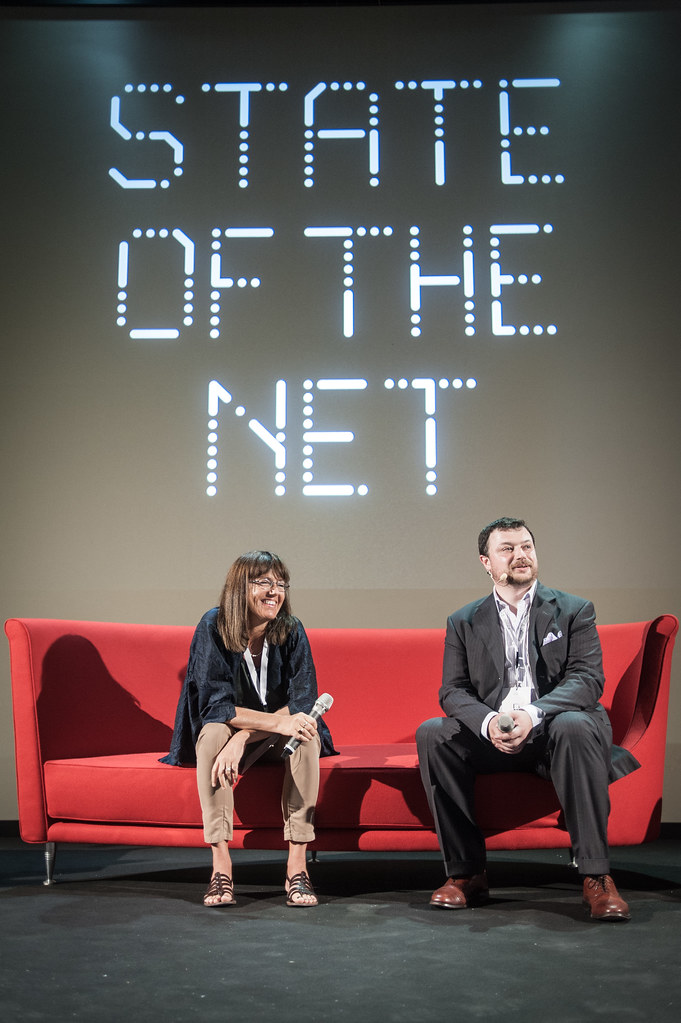 Anna Masera at State of The Net conference in 2014

How is the media in Italy different from other countries?
Italian media are very television-driven, but there is a lot of new experimenting going on everywhere. It's an exciting time to innovate and there is a lot of room for improvement.

How has working in social media at La Stampa changed your views of journalism and reporting?
I was the first social media editor in Italy! It made me very interactive with the public, very willing to offer a public service, answer requests, correct errors, explain our work and crowd-source information.

What was it like starting a position that you were, essentially, pioneering?
Not easy. The establishment doesn't like novelties, but it was exciting and a challenge that keeps me very much engaged and passionate, like in a start-up.

You took a temporary leave from your job at La Stampa to work communications for the Italian parliament. Why did you try that end of the communications business, and what was it like transition back to working at La Stampa?
I was head of communications and of the press office of the Lower House of Parliament in Rome for two years, called on to digitalize and socialize — literally, I opened the social media accounts on Twitter, Facebook and others. It was a good civic service experience. I learned a lot, and being an outsider from the political realm, I think I brought some innovation that was deeply needed like making communication more transparent and more of service to the public and all citizens who want information from that public institution. But I always knew that I wanted to go back to journalism.

What's your favorite social media platform?
Twitter. It's made for journalism.

Do you have a favorite word or phrase in Italian?
Ciao!

What person from your country do you admire the most (living or dead)?
Leonardo da Vinci.

What are you reading right now?
I read more than one book at the same time. I am reading Enough Said: What's Gone Wrong with the Language of Politics? by Mark Thompson, president and CEO of the New York Times; and also Non Aspettarmi Vivo ("Don't Wait for Me Alive") by Anna Migotto and Stefania Miretti, a documented story about the young jihadists behind recent terrorist events. But I also like lighter stuff, like I have been reading all of Don Winslow's novels.

If you were a character in a book, who would you be and why?
When I was a girl I loved Scarlett O'Hara in Gone with the Wind because she was so passionate and never gave up.

ABOUT THE SOURCE
All rights reserved © Worldcrunch - in partnership with iQ