TEL AVIV — From the beautiful beach of Palmachim, on the Israeli coast, it's hard to picture what's happening below your feet, where 624,000 cubic meters of sea water are being sucked up every day by two enormous pipes and transported more than two kilometers inland to be transformed into drinkable water.

Welcome to Sorek, the world's largest desalination plant to use a cutting edge process called seawater reverse osmosis. The facility emerged from the sand in 2013 and is located 15 kilometers south of Tel Aviv. It now provides 20% of Israel's running water and supplies 1.5 million people.

A technological gem, the installation has become a pilgrimage site for experts from all over the world. With a deafening roar, the water is projected through porous membranes that filter out salt crystals. The brine is thrown back into the sea while minerals are added to the filtered water.

"At the end of the process, the water is perfectly drinkable, with the right alkalinity and hardness," explains Micha Taub, Sorek's chief technology officer, as he fills up a plastic glass from a tap.

"Today, we have too much"

Desalination is one of the mechanisms that enabled Israel to overcome the water stress its semi-arid climate seemed to condemn it to. At the behest of the government, four factories have been opened in the last decade. A fifth is expected to become operational by the end of 2015. Together, they will produce 70% of the water consumed by Israeli households.

The model is not without its critics. Environmentalists see desalination as a large energy hog with a high carbon footprint. Some are also worried about how the salty byproduct of the desalination plants may be affecting sea ecosystems.

Advocates of desalination brush these fears aside, saying that energy consumption and operation costs have dramatically diminished thanks to the reverse osmosis technique. The alternative — i.e. not doing anything — would be far more costly, they say.

"This program has changed everything," says Avshalom Felber, president and CEO of IDE Technologies, Sorek's operator. Traditionally, precipitation covers only half of Israel's fresh water needs. "Six years ago, we were fearing that the country would find itself without enough water. Today, we have too much," says the CEO, whose company has also built a factory near San Diego, California, which is being hit by an unprecedented drought.

Israel's "water revolution" is drawing major attention from regions around the world that are also suffering from shortages. In June, the country signed an agreement with the World Bank to share its know-how. 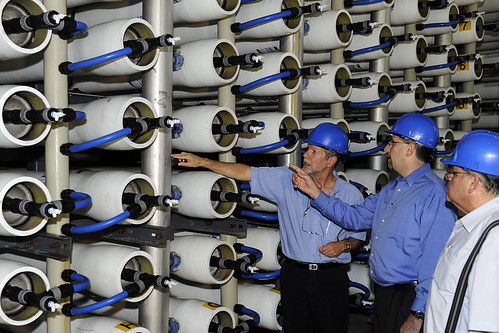 Israel has long been an innovation leader with regards to water resources. It opened its first desalination factory as early as 1972 in Eilat, in the south. It is also where modern drip irrigation was first developed — a half century ago, on a kibbutz.

"We don't consider water as a simple natural resource but as a raw material that is as important as oil," says Eilon Adar, who heads the Zuckerberg Institute for Water Research at Ben Gurion University of the Negev. "We turned it into an object of national security, and that's the key to our success."

What a recovery it's been for Israel. Between 2005 and 2009, a drought of rare intensity seriously affected its aquifers and the Sea of Galilee, its main natural resources. Pressed by the crisis, the state decided in 2007 to entrust the management of its precious resource to a new interministerial agency, the powerful Water Authority.

"We reflected on the issue like a family that's spending more than they earn: We needed to lower the costs and increases revenues," Water Authority spokesperson Uri Shor explains. "Desalination is a central aspect, but it wasn't the only one."

Campaigns against waste were launched. Prices also went up, accompanied by a major effort to strengthen the water pipes. Household water use went down 20% between 2008 and 2011 as a result.

Israel also focused on the recycling and reuse of wastewater, becoming the undisputed world leader in the field. As many as 86% of its wastewater is treated, with second-ranked Spain lagging far behind with 19%. The water that comes from treatment plants alone covers two-thirds of farmers' needs.

A few kilometers from Sorek, the water treatment plant of Shafdan, the largest in the Middle East, is testament to how important water recycling has become in Israel.

Its immense cisterns receive the wastewater of the whole central region, home to 2 million inhabitants and 7,000 industrial sites. The effluents give off an unbearable stench. But thanks to the powerful action of microorganisms, they are cleaned of pollutants in less than 24 hours. Afterwards the water is pumped into underground reservoirs containing natural sands that filter the water. "We could almost drink it," says Lior Paster, an engineer on the site.

Instead, the water is used in the fields for all sorts of crops, including the most delicate fruits and vegetables.

In the Ramat Rachel kibbutz, near Jerusalem, agronomist Shaul Ben Dov is proud of these achievements. During the last drought, the farmers in his community decided to remove the old apple trees, which needed too much water, and instead planted cherry trees. "We feared that, at some point, the taps would be empty," he recalls.

Aligned on the other side of the road are the kibbutz's orchards, which produce a successful type of cherries. Irrigating the trees is no longer a problem. "We can use as much water as we want, even when the winters are dry," says Ben Dov. "It's expensive, but to be suddenly without water would cost us a lot more."

For some, Israel's leadership in the area will really be a success if it can change the geo-strategic situation in a Middle East, where water shortages are a major issue. Water is a major source of tension, for example, with occupied Palestinian territories.

Thanks to its recent advances, "Israel now holds all the cards to offer a fairer agreement," says Gidon Bromberg, of the regional environmental association EcoPeace Middle East.

For African Asylum Seekers, No Way Out Of Israel

An Israeli law enacted in mid-2017 amounts to a de facto salary cut for African asylum seekers, plunging the community into a financial crisis.

Why Israel Is Letting Its Tech Startups Go

The Silicon Wadi, as Israel's tech sector is known, has a penchant for creating innovative new companies. But rather than grow to maturity, they're often sold off early to larger, foreign firms.