Locals are pushing back against plans to build a five-star hotel that would throw grape-killing shade on the famed Italian city's last "real" neighborhood.

VENICE — The wine is called Harmonia Mundi, a rather grandiose name for a table red. It's made from refosco grapes that soak up the sun near the waterfront of the Fondamente Nuove canal, in the Castello district, the last truly Venetian neighborhood of Venice. There's no other vineyard like this for miles around, and the vintners themselves are brothers — of the religious variety.

Just across the way for where the monks reside is a space that contains the skeletal remains of two gas holders, relics of Italy's industrial past. But that could soon change. If developers get their way, it will soon be the site of a five-star hotel — Venice's umpteenth, and a large one at that: tall, stacked in rows, with 10 floors, 286 rooms and 572 beds.

The project has been put forth by the Mtk group, owned by the Hungarian (and Austrian-nationalized) financier Ivan Holler. The group just completed construction on four hotels next to the Mestre train station in Venice that were quickly ceded to a German investment fund. It also built a multistory parking lot next to the station, for all who arrive by plane or by car to visit the laguna. Now the Mtk group has set its sights on the the last Venetian oasis.

It's one of the last zones in the city holding out against the transformation.

The Arsenal is close by. Saint Mark's Basilica is 15 minutes away. It's the one quarter of the city where the shops don't sell tourist trinkets. Just the opposite: It's a place to buy fruit, fish, moeche (the soft-shell crabs that are a local delicacy), electrical cables, lamps, newspapers, mattresses, notebooks, markers.

There are also schools. Historic ones, like the scientific secondary school G.B. Benedetti. Young children, new families. It's a working-class stronghold, home to the alternative event space Occupied Laboratory Morion and the non-partisan civic platform April 25 Group. There's life, in other words, in the Castello district.

"It's one of the last zones in the city holding out against the transformation of Venice into a sort of Disneyland," says Massimiliano Smerghetto, from behind the counter of his hardware store. "We already have way too many hotels. The data clearly shows it. Building out further, in the northern lagoon, is perplexing. It's a project without any real support from the local community."

When the new building rises the vines would stop getting sunlight at two in the afternoon.

"If we're here, it's because we love Venice and we intend to resist. In other words, we want to keep the district alive," Smerghetto continues. "But for a city to truly exist there need to be three strong bases: the residents, economic activity, and work. We have to retain our youth, find jobs that will keep the social fabric intact. We can't live on tourism alone."

As far as Fra. Rino Sgarbossa, one of the six monks who produce the Harmonia Mundi wine, is concerned, Smerghetto is preaching to the choir. 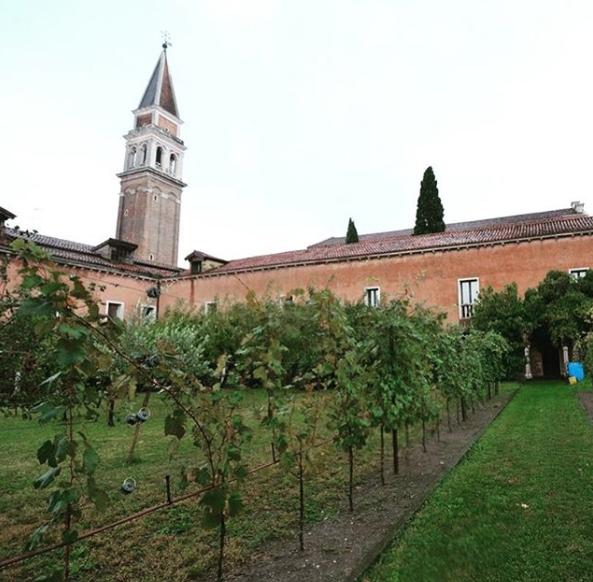 "Our surrounding wall is five feet from the gas holders, the impact of a hotel going up there would be devastating," the religious brother says.

The monastery was built in the early 1500s, right next to the church, which boasts a facade designed by Palladio. There are three cloisters, followed by the wine cellars, a library rich with ancient volumes, and a small theology school. From the windows, the rows of black grapes are on full display. It's not for nothing that all this is called San Francesco della Vigna. The vines were a gift to the Order of Friars Minor, also known as the Franciscans, in 1253.

Were the 10-story building to go up, "our vines would stop getting sunlight at two in the afternoon and would die," Sgarbossa explains. "But I don't think that matters much to those engaged in real estate speculation. Millions of euros are in play. I don't think they trouble themselves over our wine, or even the life of the neighborhood, unfortunately."

To get around the municipal bond that prohibits building more accommodation facilities in the center of Venice, the entrepreneurs behind the hotel project have offered to also build a 2.5 million euro gym — to meet the structural deficiencies of schools in the zone. In short, by erecting such a facility for public and private use, they hope to earn the possibility of investing another 30 million to erect the hotel on the grounds of the former gas holders.

"Leaving aside the harm to our wine, which we sell to finance the ecumenical studies of our new priests, it would be a radical change for the city," says Sgarbossa. "It's a different outlook. From an aesthetic point of view but also regarding the life of the neighborhood itself: This is a unique area, we all know it. Tourism brings money, but in the long term it destroys the city."

Gentrification or authentic living? The question is left in the air for the time being, pending the opinions of the superintendents and the town-hall meetings announced to the local residents.

And with municipal elections just around the corner, in May or June 2020, politicians are loath to risk positioning themselves against another hotel project in the center of Venice, at the risk of fracturing consensus. When asked, Mayor Luigi Brugnaro preferred to decline comment. The decision will be up to the city council.

The case of the vineyard is just the latest story to divide the hearts and minds of the city. On one side are those who think Venice should be exploited to the max. On the other, those who believe it necessary to protect the quality of life of Venetians, for the good of the city as a whole.

That old vineyard, which produces 1,500 bottles a year, sits exactly across from the great ships that sail before Saint Mark's. It's sunset time. An orange sun peeks through the rows of grapes. The golden light floods the cloisters. The scent of the lagoon permeates the air. Silence.

Suddenly, Fra. Paolo, another monk who works on the vines, breaks the stillness. "As it stands now, Venice is already a gigantic Luna Park," he says. "Why do they also want to take away this little space of quiet and mediation?"