Climate Change And The Vineyards Of The Future

Vineyards and winemakers will need to adapt - Jose

Climate change is already starting to affect wine growers, who scientists say will have to use other varieties of grapes and periodically move vineyards, among other interventions.

PARIS — What will French and European vineyards look like by 2050? American scientists startled wine professionals two years ago when they concluded in an article that the surface areas adapted to vineyards could diminish by 25% to 75% in the nine major regions of the global production.

Their European, and especially French, counterparts were quick to criticize what they saw as an "alarmist vision" and methodological errors. "Our colleagues mostly forgot that vine-growing has always been used to adapting," says Nathalie Ollat, a research engineer from the French National Institute of Agricultural Research (INRA) in Bordeaux.

Adapting is the focus of the Laccave project, a coalition of 23 laboratories and teams from different disciplines studying the long-term impact and adaptation to climate change in viticulture and oenology. One of them, associated with France Agrimer and the National Institute of Origin and Quality (INAO) engaged in a forecasting exercise and developed four possible scenarios for what might happen by 2050.

"This period is transitional," says Jean-Marc Touzard, an INRA innovation specialist from Montpellier. "We know that, by then, the average temperature should have risen by one or two degrees. Beyond this, we can go towards a stabilization if we reduce our greenhouse gas emissions very soon. Otherwise, the rise in temperatures will carry on."

These scientists haven't yet finished their work, but they have already put forward some theories. The first scenario is what might happen with inaction. There would be a possible multiplication of illnesses, vines suffering from a lack of water, a dramatic decrease in yields and a strong decline in quality. "This scenario, however, seems somewhat unlikely, precisely because the world of viticulture has always been able to adapt," Touzard says.

Another extreme scenario: a complete liberalization of the global viticulture sector, which would move nearer to "the beer market." It would be a world where "everything is allowed," in which Protected Designations of Origin would be shattered, marketing would become the priority and major operators would stock up according to their needs.

Even more iconoclastic, the third scenario imagines "nomadic" vineyards: Designated vineyards would exist, but only for a few dozen years, enough time to make the most of a climate and favorable conditions. 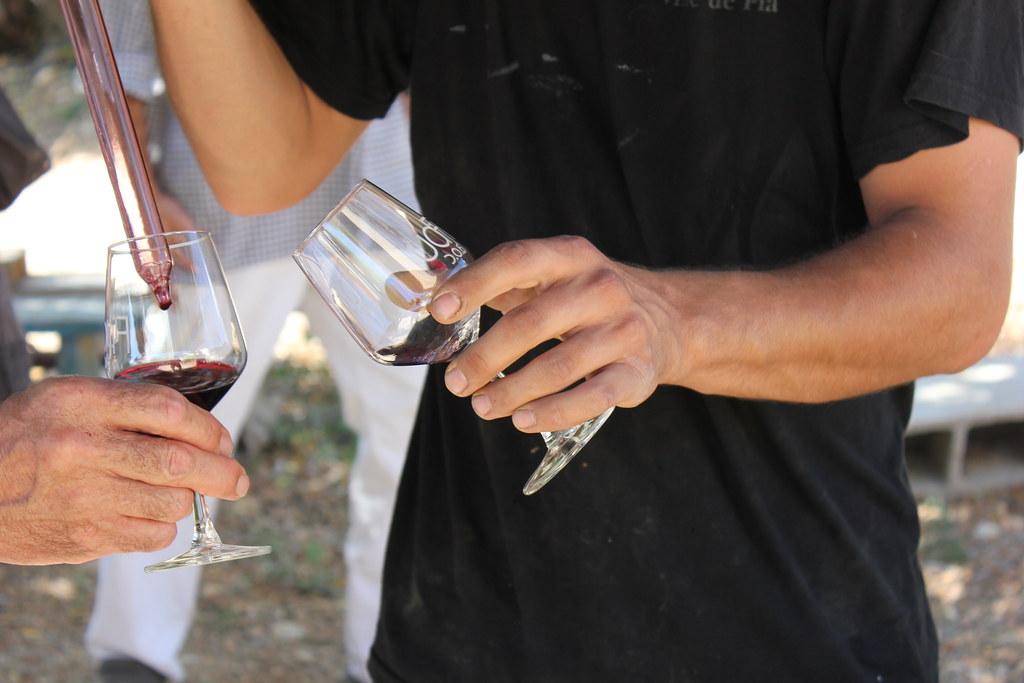 But Laccave project scientists believe the final scenario is more likely, that in 2050, the major vineyards will still be there, thanks to having adapted via innovation. Before the means to prepare for this exist, vineyards are already experimenting. "A few years ago, we plucked the leaves of the vines to let them make the most of the sun," explains Stéphane Toutoundji, an oenologist and co-founder of the Oeno Team. "Now, we're doing rather the opposite by looking to protect it."

More will be required, for instance, by exploiting the knowledge of every vineyard to the fullest. "On one designation, and even on one estate, the average temperature differences can vary by two degrees," explains Hervé Quénol, from the climatology laboratory at the University of Rennes. "That corresponds to the variation due to climate change."

Instead of irrigation, seen as an "ultimate solution," the best adaptation could come from genetics, with new varieties that ripen more slowly, are more resistant to heat and illnesses. "In parallel, the main goal is to reduce the phytosanitary treatments," Ollat says.

Already existing varieties of grapes, more adapted to a warming climate, can be used. It will be complicated in the Bourgogne region, where only pinot noir is cultivated. Not so much in Languedoc-Roussillon and even less in Bordeaux, where blending different varieties of grapes is a practice as old as wine-growing.

Through the Vitadapt project, the INRA is studying 52 different varieties of grapes planted on the same plot, a first in the world. The results are promising and would make it possible to find an alternative to Bordeaux's most famous variety of grapes: the Merlot, which takes more than 60% of the vineyard, and is known for its fruity aromas, but also for its ability to ripen prematurely, a serious handicap for the years to come.

The solution could be local, with the Petit Verdot, a regional, rarely used variety of grapes, says Kees Van Leeuwen, a wine-growing professor at the University of Bordeaux, which supervises the Vitadapt project. "It combines the taste qualities of Cabernet Sauvignon and Merlot, while reaching maturity later." The same is true for white wines and the Colombard variety of grapes, which would provide an alternative for the white Sauvignon.

What next? Beyond 2040, the Bordeaux region could make eyes at one of the many Portuguese varieties of grapes, the scientists agree. The country indeed offers a similar oceanic climate, though it's warmer by a few degrees. Around 2050, the Touriga Nacional could, for instance, replace Merlot on many plots. At that time, the list of French wines will have evolved significantly, Touzard predicts.

"The major vineyards will still be there, but we'll see local initiatives multiplying. I wouldn't be surprised to see vines in Brittany, in the North region or in altitude. And why not in town." Same thing on a global level, where vineyards will appear in northern regions. Some even predict that the current English vineyard will become an effervescent paradise for wine.

Greta Thunberg tapped into an growing area of scholarship when she wrote recently that to save the planet, we first need to dismantle "colonial, racist, and patriarchal systems of oppression."

Cash use is declining, but don't expect it to disappear. Still, there is another popular payment method that could in fact go the way of the dodo, a Deutsche Bank strategist argues.