You Can Still Go On Holiday, But It's Time To Do It Sustainably

Should we go easy on vacations ? - Dan Gold

Air travel is booming despite the current climate debate. But vacationers have to rethink their summer breaks — not only for the environment, but also for the sake of people.

MUNICH — "Urlaub," the German word for holidays, is a term that comes from 8th century High German and means "the permission to leave" and "the possibility to proceed at will" — this is what the Brothers Grimm's dictionary says. To date, this definition has changed little. Anyone who leaves their job for a few days and walks out of the mill of everyday life, wants to do as they please. For most vacationers, this means lying on a beach, relaxing and forgetting about all the problems that plague their everyday life for most of the year. And you can't blame them for wanting to do so. For most, however, the concerns surrounding humanity are waiting back at home along with the cat, a mailbox full of bills and the balcony flowers, that the neighbors should have cared for during the holidays.

This summer, this is particularly clear: The "Fridays for Future" demonstrations that took place over the past months, in which students protested for the climate, were closely followed by the big summer break for schools. Airlines are reporting record numbers of passengers. According to the World Tourism Organization (UNWTO), about 0.25 tons of carbon dioxide are generated per trip on a global average. Tourists contribute to 5% of all greenhouse gases that cause global warming. Where is the alleged flying shame, according to which people find it embarrassing to fly and therefore refrain from doing so? It seems not to be the case, since cheap airlines such as Ryanair and EasyJet agree with the head of Lufthansa: The "Greta effect" in response to the environmental commitment of Swedish student Greta Thunberg is yet to become a reality.

Meanwhile, the price war in the sky is becoming increasingly absurd. A flight to Mallorca sometimes costs less than a pizza and a beer. Nothing about those trips is romantic anymore. The old traveler's saying "Take nothing but photos, leave nothing but footprints" sounds naive today. When we think of footprints now we don't think of erasable tracks in the sand, but of CO2 in the atmosphere. The cheap travel battle cry "Nichts wie weg!" ("Cut and Run!") is ruthless in itself: there comes the claim to leaving, and for most, that's where it stops.

But it is worth it to take a closer look: young adults between the ages of 20 and 29, barely older than those who take to the streets on Fridays, take a plane to their holiday destination much more frequently than individuals over 40. However, the elders can not derive a morally higher claim from it. Theories suggests that older generations fly less because they have already traveled a lot in the past, while young people are still curious. The need to discover the world is more pronounced for many than environmental concerns. It is also desirable that people think outside the box and get to know other foreign cultures. The most dangerous of all worldviews is, as Alexander von Humboldt said, the view of those people who have never looked at the world.

Tourists contribute to 5% of all greenhouse gases that cause global warming.

Tourism is one of the most important economic sectors in the world, and many countries depend on it. Sustainability is not just ecological, it also has social components. In addition to environmental friendliness, the world also needs philanthropy. At best, vacationers bring prosperity, an improved infrastructure, maybe even a bit more stability and peace. In the worst cases, they leave behind environmental damage, the disruption of everyday life and social injustice, because not all locals benefit equally from their visit. In any case, global problems are not going to be solved by keeping everyone at home. 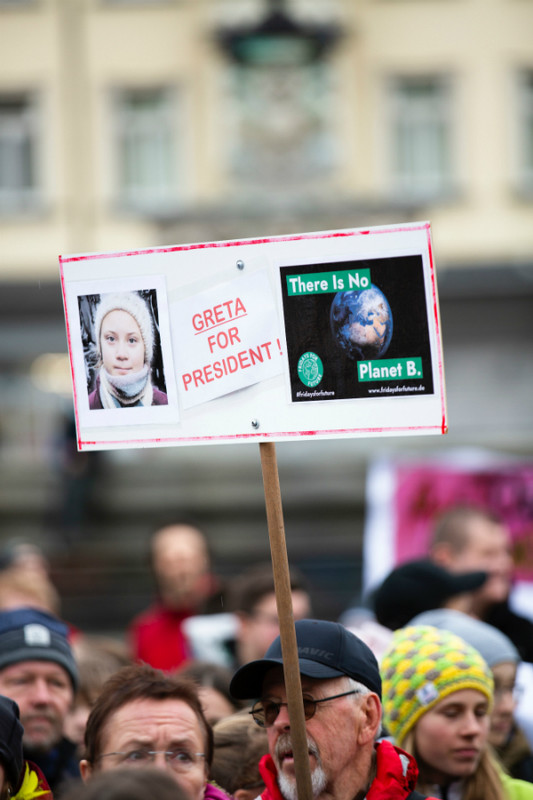 "Greta Thunberg is yet to become a reality" — Photo: Markus Spiske

The central question is therefore not: Can I still go on holiday? But: How should I go on vacation? Despite all the political instruments, from the petrol tax to the CO₂ emissions, which are currently being measured, the behavior of the individual remains crucial: vacationers have to rethink how they spend their money, just like supermarket customers.

Similar to the increased demand for organic products or the decline in meat consumption for many, there are also opportunities in tourism. People do not have to take a long-distance trip every year, and rather than flying for a long weekend, it is better to travel for several weeks at a time. Holidaymakers can also compensate for flights and look for socially and environmentally certified homes that save water and pay personnel fairly. For this there are quality seals in travel catalogs, as they exist for chocolate or coffee.

Those traveling in small groups treating their hosts as equals, booking with local organizers and staying in small guesthouses help local families instead of international tourism companies. Then, holiday-goers recover and relax, but the world is also damaged less.