A WWII bunker next to a modern U-Bahn station - Photocapy

Hundreds of air-raid shelters are still standing in Hamburg and Schleswig-Holstein, witnesses to a bygone era. The last ones are now being sold off.

HAMBURG — Even now, more than 70 years after the conflict ended, many of Germany's World War II bunkers are still in active use as flats or museums, or by companies and other organizations.

In Hamburg alone, there are still hundreds of these air-raid shelters, the most famous of which is probably the Feldstraße bunker. It currently provides office space for many creatives and is home to the nightclub Übel & Gefährlich. There are even plans for a rooftop garden and a hotel.

Until recently, around 30 bunkers in the city — of both the overground and subterranean variety — were still owned by the state. Now almost all of them have been sold. There are only three overground and two underground bunkers still up for sale by the Federal Institute for Real Estate.

"We are currently in negotiations to sell all five of the Hamburg bunkers that are still owned by the state, or their sale is imminent," said a spokeswoman for the Institute. Some will be sold to private investors, and some to the City of Hamburg.

Across the country, more than 250 overground bunkers changed hands.

In the neighboring state of Schleswig-Holstein, the Federal Institute for Real Estate had 13 bunkers for sale. All have now been sold, for a tidy sum similar to what a fairly large house would fetch. "Over the last 10 years, the average sale price in Schleswig-Holstein and Hamburg was 700,000 euros," said the spokeswoman.

The bunkers are even more valuable in Hamburg, fetching on average 1 million euros each.

Nationwide, the average sale price for an air-raid bunker in the past 10 years was 270,000 euros. Only bunkers designed to protect ordinary citizens have been put up for sale, not those that housed weapons or military personnel.

Across the country, more than 250 overground bunkers changed hands in this way, after the government decided in 2016 to sell off all public air-raid shelters.

The City of Hamburg (including municipally-owned corporations) is currently in possession of 23 bunkers, according to its own figures. But as noted by Claas Ricker, a representative of the city's finance department, seven of them are unusable as they are situated in parks or traffic areas. A further eight belong to municipally owned corporations.

Bunkers are sometimes demolished to make space for houses or flats.

That means there are another eight bunkers available for alternative uses or development. Most are already rented out on long-term leases. "Not all bunkers lend themselves to being converted," says Andreas Dressel, finance senator for the Hamburg city-state. "But of course we always look at each individual case very carefully, to determine if and how a building could be used. There have already been some very good, creative examples of bunkers being repurposed."

That's precisely what's planned for the bunker at 195 Marckmannstraße, a protected monument, which could soon be turned into a concert venue and museum. But other bunkers — those without protected status — are sometimes demolished to make space for houses or flats. The Weidenstieg bunker, which will soon be replaced by newly built accommodation, is a case in point.

Others, such as the Steintorwall bunker, an underground facility by Hamburg's main station, are used as museums. Its historical significance, dating back half a century, makes it the ideal venue. "The whole thing is a museum piece," says Sandra Latussek of the organization Hamburg Underworlds. "We're not changing anything,"

The underground bunker belongs to the city but will be used and managed by Hamburg Underworlds, which will also be responsible for costs, renovation and maintenance. And as a monument, the bunker has a lot to say, because catastrophes don't just belong in the past. 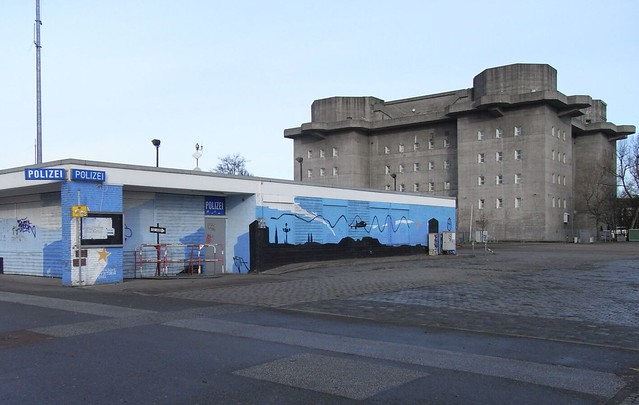 A WWII bunker with a police station in the foreground — Photo: Rauter

In fact, the building tells two stories. The first is about the devastating bombing during World War II. The second is a story of the Cold War, of living in fear of the nuclear threat. It is a fear that marked the post-war years and is reflected today in the ever-present threat of terrorism. The fear that it could happen to any of us at any time, that we are not safe.

There is nothing left of the original 1940s building.

The Steintorwall bunker was built between 1941 and 1944 when Hitler instigated a program to construct shelters in cities that were vulnerable to bombing attacks and had important weapons factories. Hamburg was designated as one of the most important cities and forced labor was used to construct the bunkers.

The structure is made up of two independent but linked chambers, measuring 2,700 square meters overall. It was intended to be used by 2,460 people, but it is thought that during the bombing raids up to 6,000 people sheltered there.

There is nothing left of the original 1940s building. "Everything we see here comes from the Cold War era," says Latussek. The British blew up a lot of bunkers after 1945, but this wasn't possible with the Steintorwall bunker as it was so close to the station.

At first, the building was used as accommodation, then as a hotel. As the East-West conflict raised fears of a Third World War, the underground bunker was adapted to provide protection against nuclear, biological and chemical weapons. Today it is open to visitors, who can take a guided tour and learn the secrets of its underground history.