A pioneering Swedish researcher has come up with new insights about love and romance after analyzing the databases of the dating site Meetic.

PARIS — When it comes to love and romance, everyone's ready to tell a little white lie to make themselves seem younger, thinner, or even bigger!

These deviations from reality are what sociologist Marie Bergström was able to quantify by using a 21st century tool: the digital traces we leave on dating sites. Among her findings, surprise surprise, is that the typical profile of a user on the French dating app Meetic is "2 centimeters taller and 2 kilograms lighter than the national average."

Users often bend the truth with age too, with a tendency to round down, Bergström found. But they're also prudent, she discovered. They make sure the lies aren't so obvious that — in the event that they meet a suitor in person — they'll still have credibility.

For her research into conjugality and sexuality, the Swedish scientist, a research fellow at the National Institute for Demographic Studies (INED), chose to employ classic sociological surveying with massive numerical analysis.

Our digital age allows our love lives to be increasingly connected. In the 1980s, only one in 50 people in France used classified ads or marriage agencies. Today, about one in four people (aged 18 - 65) use a dating app or website. "We are turning en masse to commercial intermediaries in order to meet someone," the sociologist explains.

People may be unwilling to confess to certain actions, like admitting that they choose their partner by avoiding certain skin colors

These private companies store massive amounts of personal information about their users, a raw material that, once made anonymous, offers unexpected insights, according to Bergström. "The importance of this data is not so much that it's both dense and digital, but that it bring us clues about practices that were previously inaccessible," she says.

Traditional sociological surveys are conducted by questionnaires. "But people aren't necessarily good evaluators of their own behaviors," Bergström explains. People may not remember certain facts, like what they've eaten on a specific day, for example. Or they may be unwilling to confess to certain actions, "like admitting that they choose their partner by avoiding certain skin colors," the sociologist says.

Digital data, in contrast, "makes it possible to study the social world as it's made through the economy of speech," she concludes. "It is distant and quantified observation, an unprecedented approach in my discipline." 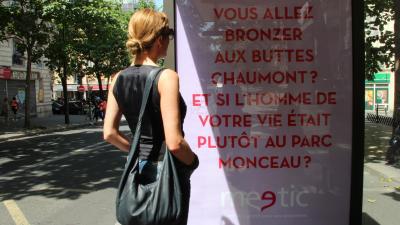 It was the sociologist Michel Bozon, her professor at Sciences Po and co-director of a 2008 national survey on sexuality, who guided Bergström in 2007 to study the trails left on dating websites. The then 25-year-old student plunged into the connected and "backwards" world of these websites. A dozen years later she's considered a pioneer in France, and one of the leading world experts in the field of love-related digital data.

How did Bergström conduct her research? Following an agreement with the dating site Meetic in 2011, she succeeded in extracting the substantive marrow of 10 million anonymous profiles (without username or photo). These people had generated more than 200 million messages (the researcher only had access to sending times and dates) and 2 billion "digital interactions."

"I wasn't aware of the contents of the conversations," she says. "But I knew that A had contacted B, that B had (or had not) answered, and what day and what time it happened." From there she traced links to answer questions such as who is interested in whom, who responds, who never gets responses, etc.

Bergström's research has brought new light on the formation of couples in the 21st century, offering novel answers to old questions

Bozon, her thesis director, admits he was surprised by her decision to study the dating website. "I never thought she would try to work on Meetic's data. It's difficult to tackle because of the massive scope of the information. Nor did I think she would even succeed in obtaining the data," he recalls.

The negotiations with Meetic were indeed long and complicated. But in the end, Bergström did manage to get access. "Marie is not afraid of anything, and has pioneered and made rigorous contributions in the field of Internet use," says Bozon.

Her results are gathered in an enlightening book, Les Nouvelles Lois de l'amour: Sexualité, couple et rencontres au temps du numérique (The New Laws of Love: Sexuality, Couples, and Dating in the Digital Age). And they have earned her a place on the science council in the exhibition "De l'Amour," which recently opened at the Palais de la Découverte in Paris, France.

Bergström's approach is still being debated by others in her profession. "The skepticism is still there," she says. "When I present my research to quantitative sociologists, they always question me about the limits of numerical data, especially over their non-representativity."

The sociologist admits that big data only shows "a piece of the picture" — not the entire image. "But we can equally find limits to qualitative surveys," she adds.

The women in their 20s and 30s seek older partners, but when it comes to men, the results differ

Either way, it's fair to say that Bergström's research has brought new light on the formation of couples in the 21st century, offering novel answers to old questions. One of those has to do with age difference, and the pattern among heterosexual couples of older men forming relationships with younger women — in almost every country of the world, and across time periods. Why is that?

In France, this tendency has long been attributed, according to classical sociological surveys, to female will alone. But by crossing big data with interviews, Bergström draws a more complex reality.

Interview-based surveys show that women in their 20s and 30s seek older partners. The digital data shows the same thing. "The young, mature women already have an idea of relationships and are looking for a partner who knows where they are in their life. It is older men who embody this stability," the sociologist explains.

But when it comes to men, the data and the interview results differ. When speaking to a sociologist, men say they're open to meeting women of all ages. Their user habits on relationship apps, however, tell a different story. "They are clearly asking for younger women," Bergström explains.

In fact, the researcher was able to show, with figures, that the dating site led to "contemporary inequality" with regards to meeting up. Some groups of people are excluded: young men, for example, and women over 40.

Even on applications popular with young people, where the male initiative is particularly strong

Bergström also notes that past surveys have focused on existing couples. As such, they only consider one part of the story — the "happy ending," so to speak — without looking at what happened before, the hesitations, the disappointments. "Digital allows us to know what's at the bottom of a card," she says.

Bergström, a feminist, first came to France as a 20-year-old to study French in Nice during a sabbatical year. She hadn't even considered sociology yet as a possible career path, but was fascinated by the country's love codes.

"In Sweden, it's not uncommon for a girl to cross the room in a bar to go talk to a boy she likes. But here it's up to the man to take the initiative," she says. In this case, the digital data concurs. "Nine times out of 10, online, it's the man who takes the first step. Even on applications popular with young people, where the male initiative is particularly strong. In love, the Internet does not break codes so much," she says.

But is this reality specific to France? That's the next question Bergström hopes to answer — by using anonymous data from Meetic and Match, two sister companies present in 15 countries and used in 13 languages. The idea is to broaden her research across international lines and thus put France's dating norms in perspective.

Curious to know what she'll find? Stay tuned, and expect a response in 2021.