Wagah The Dog? The Daily Paradox Of Pakistani-Indian Border Ritual

WAGAH — Here at the India-Pakistan border, thousands of men, women and children have gathered to watch a stunning ritual: On either side of the border, military march back and forth, as music roars and crowds cheer.

Known either as the Wagah border ceremony, the lowering of the flags, or "Beating Retreat" ceremony, the ritual has been performed every day since 1959, as flags are lowered around sunset. "Summer, winter or in any kind of storm, whatever the weather or political conditions, the parade doesn't stop," said Sumer Singh, former Deputy Inspector General of India's Border Security Force (BSF).

The ceremony has survived despite very tense relations between the two countries, as the violent partition of 1947 and the continuing conflict in Kashmir have permanently embittered the south Asian neighbors.

Still, the atmosphere is festive with loud music and patriotic slogans filling the air. On this side of the border, people have painted the Indian tricolor on their faces. They wave small flags, and break into dance as patriotic and Bollywood songs blare over loud speakers. The crowd cheers them on. The commander on the Indian side shouts a battle cry and about a dozen armed soldiers follow him to the iron gates that separate India and Pakistan.

Wearing Khaki uniforms and red-fanned turbans, the soldiers are forceful and aggressive — swinging their arms, stomping the ground vigorously and performing high kicks that nearly bring their legs to their foreheads.

Singh says the soldiers are specially selected and groomed for the job. "They are put through a rigorous training and it takes up to two years to bring a soldier into the required rhythm where he can match the steps and be fit for the drill," he explained. "They are also asked to grow moustaches. Only the best get the chance to represent the country whether on our side or the Pakistani side."

As the border gates on both sides are thrown open, the Pakistani rangers in black uniforms and matching fanned turbans appear performing similar moves.

The crowds go berserk and chants of "Hail to Mother India" on the one side and "long live Pakistan" on the other, grow louder and louder. After the show of strength and an exchange of menacing looks, soldiers from both sides lower their respective flags.

The parade was initially intended as a gesture of goodwill between the governments. But it has turned bitter and aggressive over the years — a true reflection of the declining relationship between the two neighbors. The fierce competition, rivalry and mistrust between soldiers is visible both during the parade and afterward.

"It is a question of national honor," said Ravi Dubey one of the Indian soldiers."If we show any signs of weakness it will be seen as India's weakness and we can't afford doing this when the other side is Pakistan. We have to remain a step ahead of them in everything."

We must come out of this cycle of hatred.

Ironically though, as Sumer Singh explains, the ceremony is truly a joint venture, shared and agreed upon by the two countries.

"It is the element of aggression in the drills that attracts the audiences," he notes. "When on a zero line a soldier stomps and shows his courage it gives the audiences a thrill and it is not as if Indians are doing it or Pakistanis are doing it arbitrarily, we practice it daily jointly and if there are any changes to be made, any step to be added or removed, the decision is taken with mutual consent and it is done with a view of making it more attractive and better synchronized."

But the way the parade is used to arouse nationalistic passions and promote jingoism is causing concern among those who strive for better relations between the two nuclear-armed neighbors.

"This site is also a reminder of what we chose not to recognize along with our independence and emergence as separate nations," said Devika Mittal coordinator of a group called Aghaz-e-Dosti, or the beginning of friendship. 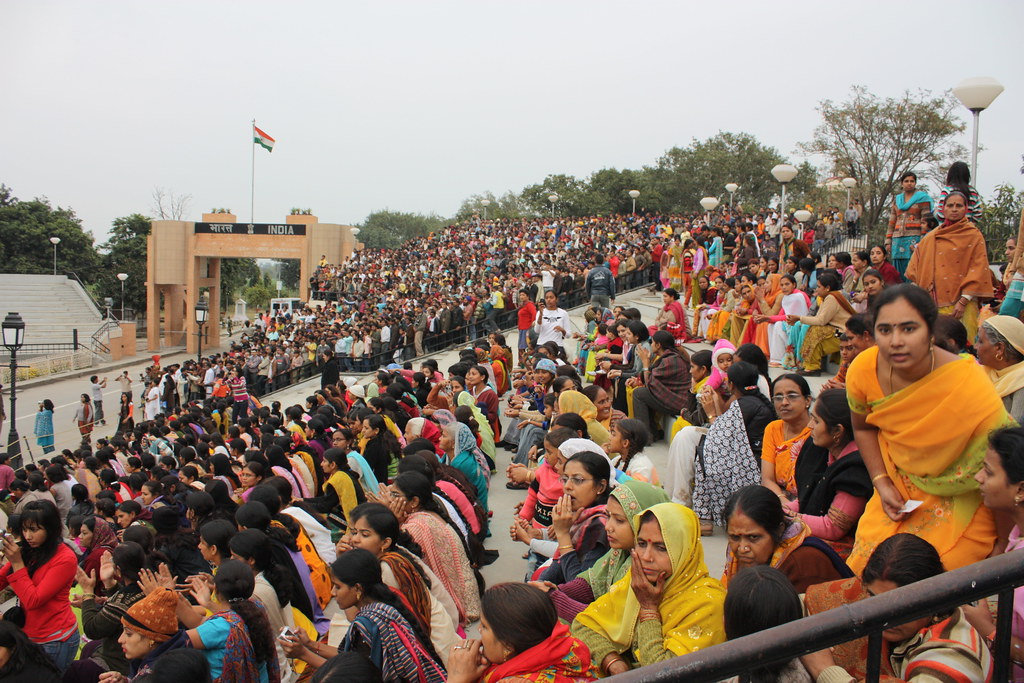 "Our separation or partition came at a heavy human cost," she explains. "Millions of people were displaced on both sides. People were killed, raped and they separated from their families. At that time there might have been no border gates but the space was the passage for the migrants and it continues to mark those memories."

Back at the border parade, after the last bit of powerful stomping, twirling of moustaches and exaggerated rolling of eyes, the soldiers shake hands and the border gates are again slammed shut.

The choreographed show of aggression comes to an end, just like a fiercely fought India-Pakistan cricket match.

With strong political will on both sides, Devika argues the same ceremony could be used to sow the seeds of lasting peace and friendship between the two neighbors. "Why can't we accept the fact that we were and are the same people? Why can't this ceremony be used for peace building?" she asked. "We cannot undo the past but we must come out of this cycle of hatred."

ABOUT THE SOURCE
All rights reserved © Worldcrunch - in partnership with KBR

Why Women's Rights And Pakistani-Indian Peace Go Hand In Hand

India And Pakistan, A Virtual Return To History Of Shared Troubles

Using social media platforms, professors from Pakistan and India developed a course that looks at...