Slow Vegetarianism: Take Your Time And Use Your Brain

Going vegetarian or vegan is not just to stop eating meat, but a progressive rejection of the globalized food industry.

BARCELONA — The warnings have been piling up for years: researchers are encouraging the public to eat less meat, both to protect the environment and their health. In 2015, the World Health Organization (WHO) qualified red meat as "probably" cancer-causing and processed meats as "carcinogenic to humans," prompting social alarm and a sustained reduction since in meat consumption worldwide.

Spain's Agriculture Ministry, which gathers food consumption statistics, found that meat-eating in Spain fell by 2.8% in 2018 compared to 2017, as part of a steady decline over the previous seven years. In the United Kingdom, a study carried out by Sainsbury's supermarkets found that 91% of Britons were actively reducing meat consumption, not just for health but also ethical and environmental reasons.

In Argentina too the numbers are telling: The Agriculture Ministry has found that every Argentine eats on average 51.4 kilograms of meat annually, compared to 65 kilograms 19 years ago.

Environmental groups have been urging a drastic cutback in meat and dairy consumption for some time, to help protect the planet. The IPCC panel, a United Nations body, stated in an August report on land use and climate change that high beef consumption levels were key to exacerbating the climate crisis. 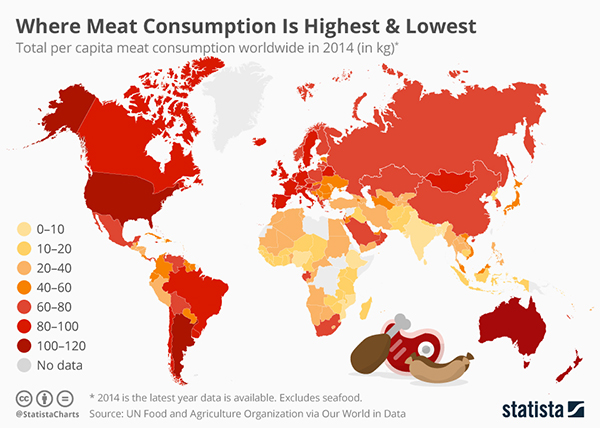 Still, while many people try to become vegetarian, almost as many fail half-way in their bid to swap the omnivorous for a vegetarian diet, for reasons of nutrition but also social adaptability.

Daniele Rossi is the 50-year-old co-owner of the Rasoterra restaurant in Barcelona, part of the Slow Food movement. He says "there were so few of us when I became a vegetarian, and there were barely any vegans as there was so little information and you got tired of hearing 'I don't feel like I've eaten if I haven't had meat'." Now, he says, thanks to the internet and the work of animal rights activists, many find it easier to go straight into becoming vegan, "which new generations are doing very well."

The vegan artist and activist Nika López says she approached vegetarianism a decade back as a teenager, "to know about new things." She has now adopted a vegan lifestyle that "questions ethical, environmental, social, political and economic issues from a position of actively confronting the system, which would have been impossible without the amount of information I have been able to access in recent years."

For Rossi, a major error many commit when embarking on becoming vegetarian is to "still not question where their food is coming from. Not taking into account the origin of foods has a terrible impact on the planet." Many fashionable superfoods, he points out, or fruit and vegetables like avocados or quinoa "come from the other end of the planet, and that is not sustainable. In my opinion to be vegetarian or vegan, fundamentally you must focus on territory."

Rossi is aware of the complexity of the arguments he has expounded since opening his first eatery in the historic Raval district of Barcelona, in 2001. Sometimes people are uncomfortable with it, but he says there can be no alternative. There is no sense becoming vegetarian, he says, "out of an ethical concern for animals and consume foods whose production entails the destruction of ecosystems in other parts of the planet."

Quinoa is a good example he cites. "It is one of the star products right now, and many do not know that those who grow it must export it as they have no money to buy it. Is it better to eat vegetables than meat? Certainly, but without forgetting we could fall into certain contradictions on which we should at least reflect." Álvaro Sánchez, a nutritionist with Medicadiet, a Spanish nutrition and dieting firm, insists he "religiously" repeats to his patients that "fruit, vegetables and green vegetables must be, without exception, seasonal and local."

Vegan eating, he says, is a "long path that requires a complex process of reeducation" alongside "appropriate factors." Many people, he says, become frustrated when they fail to complete the journey, or give up, and a main mistake he cites is "trying to suddenly reach veganism or vegetarianism, when the most sensible thing is to do it gradually." If one is used to food variety, becoming vegan too quickly "can be complicated emotionally and in social terms, but also physically. The body may react when so many foods are suddenly withdrawn," he says.

Nika López recommends a gradual approach: "first spend a month without eating red meat, then a month without chicken, then fish, eggs and dairies.., until you get to where you want." Another mistake the artist cites is the zeal that can prompt vegans to reproach others for their failing commitment. "Being vegan is not just not eating animals. You mustn't dress from animal skins either or have anything of animal origin in your home. And if we go further we should question the production dynamics of certain foods on a global scale even if they are vegan, which is the case with cereals for example."

Rossi and López represent two different generations that discovered vegetarian and vegan living at different moments of recent history. Omnivores accuse them at times of being excessively militant and as López says, "it is true our convictions are so strong and we are so clear on the need to act to change the planet that we can even say it in unpleasant ways."

The artist explains that when she first became vegan, certain people around her were uncomfortable. "I was in a struggle and could not abandon the fight for a moment, and the aggressive attitude was often a reaction to the lack of understanding I found around me. I remember I would arrive in the kitchen and tell my mother it was full of corpses."

López now supports an active and didactic veganism as a space where new vegans, whatever their motives for abandoning meat, will feel supported and find answers to the many doubts that may emerge in time. She says "being vegan means never stopping learning as at the end of the day, it is a way of confronting the system from a global perspective."

On The Trail Of Invisible Bears Wreaking Havoc In The Pyrenees

VAL D'ARAN — It wasn't until I'd made may way clear through to other side of the village ...

Watch: OneShot — 80 Years Ago, End Of The Spanish Civil War

...and the beginning of Francisco Franco's decades of military dictatorship.