For 25 years, the Sri Lankan military waged war against the Tamil Tiger rebels, killing and displacing thousands of people. Though it ended in 2009, militarization remains and people haven't been able to reclaim lands.

JAFFNA — Two meters separate Subnamanigaiyar Kugathasasanma from the past. Two meters of soil surrounded by barbed wire. Bare chested, his waist wrapped in a white sarong, he looks at the wrecked home he left in haste 25 years ago as if he were contemplating a memory. He hadn't returned to his bullet-riddled shack since 1990.

"We had to leave quickly to flee the fighting," he says pointing to his pruning knife on the other side of the barbed wire. "I left behind my land titles and some personal belongings that you can see over there."

In April, the Sri Lankan army released his plot of land and the old Hindu temple nearby where he worked as a priest. But his house stayed behind a fence. It is situated in a "high-security zone," protected by a soldier who types on his phone's keyboard nonchalantly.

When the clergyman returned for the first time four months ago, he didn't recognize anything. "It was a jungle," he says. "The ancient statues of the temple were gone, resold on the black market by soldiers." Day after day, he weeds, replants peppers and vegetables, slowly rebuilding his life.

"Without soil, life can't exist!" he exclaims, his eyes laughing. The temple will soon be renovated, he hopes, thanks to donations collected from the faithful. No one knows, though, how he will be able to welcome all of them, with such a fence, during religious festivals throughout the year. The barbed wire surrounding military camps in the north of the island is the last plague of a conflict that has lasted for 26 years and is not yet fully resolved.

Six years after the end of the civil war that pitted the Sri Lankan army against the Tamil Tiger rebels, killing nearly 10,000 people, thousands of displaced people are still waiting to reclaim their lands occupied by the army. This military presence weakens reconciliation between the Tamil, Hindu and Christian minorities and the Sinhalese-Buddhist majority.

According to an assessment by the U.S.-based Oakland Institute think tank, the northern province of Sri Lanka has nearly one soldier for every six civilians. Demilitarization in the north had been one of the key issues of legislative elections, which concluded Aug. 17 with the victory of a reformist coalition supporting Maithripala Sirisena, the president elected in January. Sirisena has promised to progressively return the lands, though he has offered no specifics.

Rather than withdrawing after the conflict ended, the army has settled in. Who would have thought that the tourist complex of Thalsevana, where families relax around a swimming pool, would be among the "high-security zones"? But to book one of the "luxury rooms," the phone number actually directs callers to the Ministry of Defense. The place is defined by strict rules, such as the obligation to remove sandals two meters from the swimming pool, no more no less. Those who go a bit too far away from the resort can see a man with a khaki uniform emerging, a crackling walkie-talkie fixed on his belt.

The only civilian working on the site is the hotel keeper, who has a difficult task: to train the soldiers to work in his sector. "They are highly disciplined, but we always need to be there to tell them what to do," he says. "They lack initiative." From the hotel's promenade, along the sea, there is an idyllic landscape. A cool wind blows on the azure sea. In the distance, a few houses loom on the horizon, and they too are occupied by the army. The tenants, evicted 30 years ago, were left to live a few kilometers away, in Mallakam, a gloomy slum made of tin houses and known by authorities as the "welfare camp."

Here, former fishermen do nothing but buy fish or collect wood to resell, by bike, in inland areas. In the afternoon, when it's too hot to stay inside the tin houses, a few women sit outside in front of a stall full of onions and beans to kill time and to potentially earn a few rupees.

"I've lost my land and my two boats," says one of the women, her teeth stained black by betel leaves. "I've lost my two legs because of a shell burst," adds the woman seated next to her in a wheelchair. "I've lost my husband and have found no trace of his death," another says. And they've received virtually no help, nothing beyond political candidates bringing them "tin roofs and rice before elections."

In Mallakam, life hangs on to these lost lands. Under a small shaking chapel, a statuette of Jesus wrapped in a garland of flowers is pampered, decorated and revered, as if only God could improve their lives after so much disappointment. "Their life conditions are inhumane," says a Catholic priest in Jaffna. "How can you live in such crowded conditions? Many kill themselves."

The government here doesn't recognize displaced people as such. The previous regime of Mahinda Rajapaksa claimed in September 2012 that all the displaced people could return to their lands. According to the Internally Displaced Monitoring Center, an independent organization, almost every resident who had fled the fighting in the last years of the war, in 2008 and 2009, returned home. "But the longtime displaced people had never regained their houses," the director says.

"Militarization is not limited to the very presence of soldiers," adds Ahilan Kadirgamar, member of a group working for economic democratization. "Until recently, the army was controlling the whole administration and keeps managing citizens' daily lives." 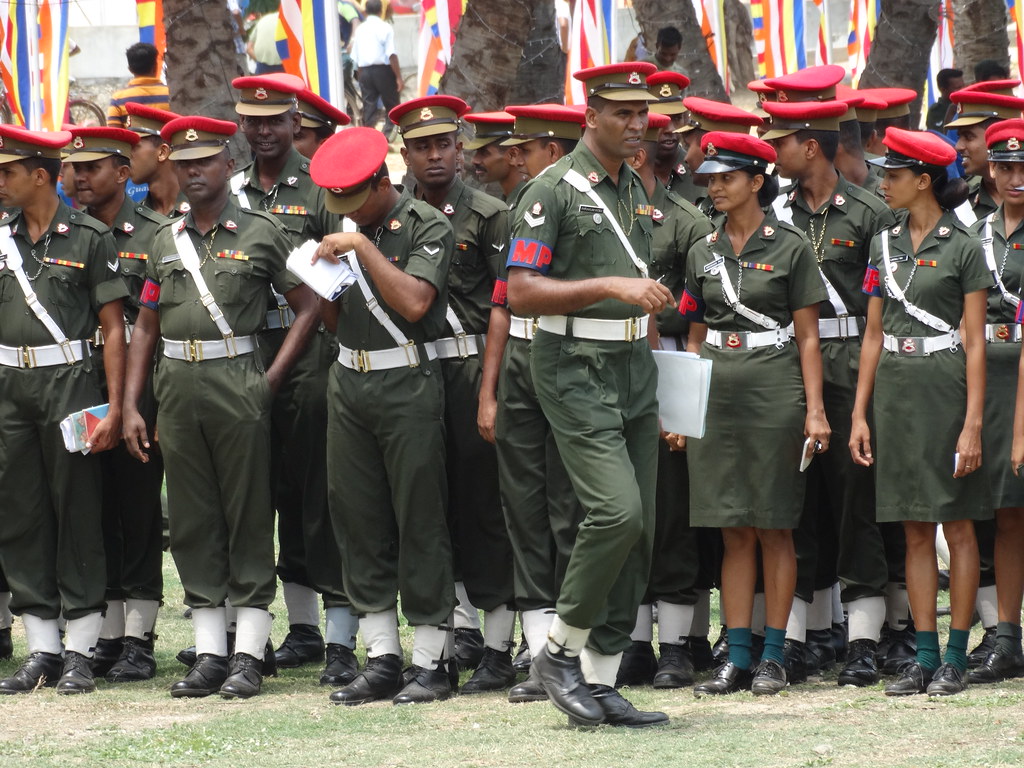 One NGO director says groups like his are regimented. "The administration gives us the list of displaced people and tells us what to do and when, with the UN Refugee Agency money," he says. The Sri Lankan government has not spent a single rupee to build houses for displaced Tamils. It barely gave each family 80 euros to clear away the debris of their former homes. Schools and religious buildings have to be rebuilt, wells filled during the war have to be reopened and hamlets still need to be connected to electricity.

The army is suspicious of peace. The only museum it constructed was the War Museum, at the very place where Tamil Tiger leader Velupillai Prabhakaran was found dead in 2009. The Sri Lankan military's exploits are exhibited outside: homemade submarines filled with explosives that were used to conduct suicide attacks, or fishermen's boats transformed into warships, in front of which tourists take pictures.

At the Information Center, yellowing photos show soldiers helping civilians who fled during the war. The same soldiers who, according to a 2011 UN report, "bombed the population on a large scale in three curfew areas where the government had encouraged the civilians to take refuge." Tens of thousands of citizens died in the last months of the war.

Several military men discreetly stand guard behind the War Museum. "Tamil Tigers can come back at anytime, and this museum could be a prime target, especially as the wife of one of the Tamil Tiger leaders lives just a few kilometers away, so we prepare for an attack," says a confident soldier dressed in khaki shorts. 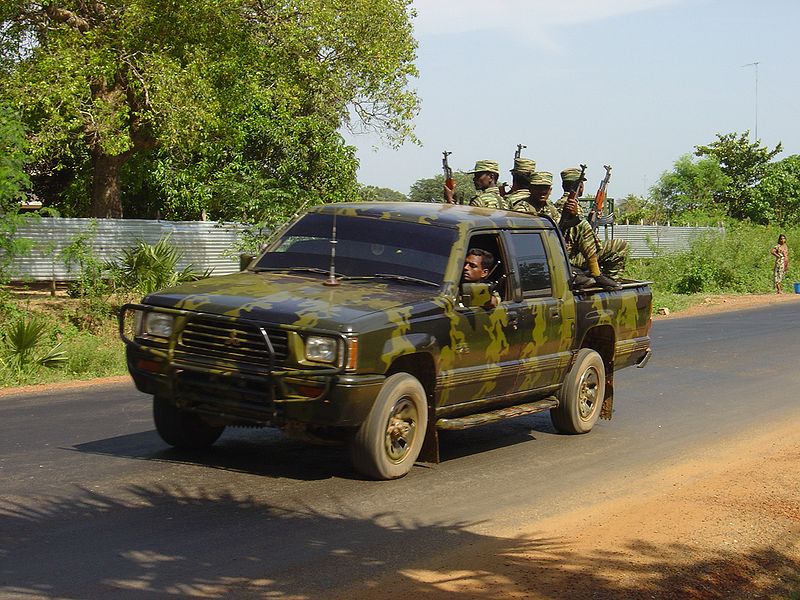 For fear of the resurgence of the Tamil separatist cause, the previous regime used "soft power" to recapture the north of the island. "These last six years, the Sinhalisation process intensified with systematic efforts from the government to replace Tamil culture and history by monuments of victory, symbols of the Sinhalese hegemony," the Oakland Institute wrote in a June report entitled, "The Long Shadow of War." Buddhist temples were even constructed in Tamil villages where there are no faithful. Some Sinhalese were even encouraged to go settle in the north. Jaffna has now a district called "Sinhalese's voice" that residents call "the government's village."

On the outskirts of the district, a huge statue of Buddha, with his smile of beatitude, watches the trains of the new railway line inaugurated in 2013 A couple of saffron-robed monks recite prayers in front of a handful of worshippers while a military man, dressed in civilian clothing, is monitoring the comings and goings.

"We'd been living here for generations before we were driven out by Tamil Tigers," explains Wijet Dasa, an air conditioner repairer who has been living here since 2009. But out of 189 families who arrived in 2009, 130 had to leave. "There's nowhere to send our kids because all the schools teach in Tamil language and it's hard to find a job when we are Sinhalese," Dasa says. When he fled southward, he was perceived as a Tamil and suffered multiple kinds of discrimination.

Back in Jaffna, his Sinhalese identity prevents him from easily finding work, more evidence that peace and reconcilation in Sri Lanka remain elusive.

A Sri Lankan Mission To Save Endangered Elephants

Deforestation, poaching and civil war have had a devastating impact on Sri Lanka's elephant population. One orphanage for elephants is working to bring the species back from the brink of extinction.

A President's Downfall, Nepotism And A Ghost Town In Sri Lanka

Mahinda Rajapaksa, who was credited with defeating Tamil guerillas, lost his bid for reelection in 2015. Now, his local fiefdom is suffering.