Lining Up For Leonardo: Is Mona Lisa A Burden On The Louvre?

As a new Leonardo da Vinci exhibit opens an eternal Parisian question returns of whether his (and the world's) most famous painting is a blessing or a curse for the world's most visited museum.

PARIS — The most visited museum in the world houses the most beloved painting in the world — the two are linked, and completely without precedent in the world of art. The numbers alone are mind-boggling: 10.2 million visits per year, or 30,000 people a day, about 75% of them are tourists from abroad. Once arrived at the Louvre, they have the choice of some 35,000 works, but most have eyes for only one: the Mona Lisa — and the path that leads to her is thus typically a mob scene.

It's a trend that will likely intensify with the opening of the Leonardo da Vinci exhibit on Thursday. Which prompts the question: Is this current museum model threatened by a painting that is as indispensable as it is a burden?

At the height of summer this past year, the Louvre had to close its doors and turn people away. The wait in line was two hours long. Repairs had forced the Mona Lisa to be moved to a different room, where the hallway was shorter and narrower, and it was madness as a result.

The situation has improved since Oct. 7, when La Joconde regained her rightful place, now set against a midnight blue backdrop. Two lines, regulated by seven guards, have been set up before the painting (previously it had been all-out war, every visitor for him or herself). The new arrangement has been a success judging by the faces of tourists, who mostly take photos and selfies.

A single glitch can bring the palace to its knees.

Yet now with the Leonardo exhibit opening, the crowd anxiety returns. The memory of the Vermeer exhibit in 2017 lingers on: a crashed online reservation system, four-hour in-person waiting times, visitors turned away.

The Louvre seems to have learned its lesson: Reservations for this exhibit are now mandatory, and space is twice as large as that of the Vermeer show. Some 600,000 visitors are expected — modest for the Tuscan genius, but enormous for a museum which gives priority to its permanent collection. How the museum handles the flow of visitors between the Leonardo exhibit in the Napoleon Hall, located beneath the glass pyramid entrance at street-level, and the Mona Lisa, who will remain in her room on the first floor above ground, will be the ultimate test. 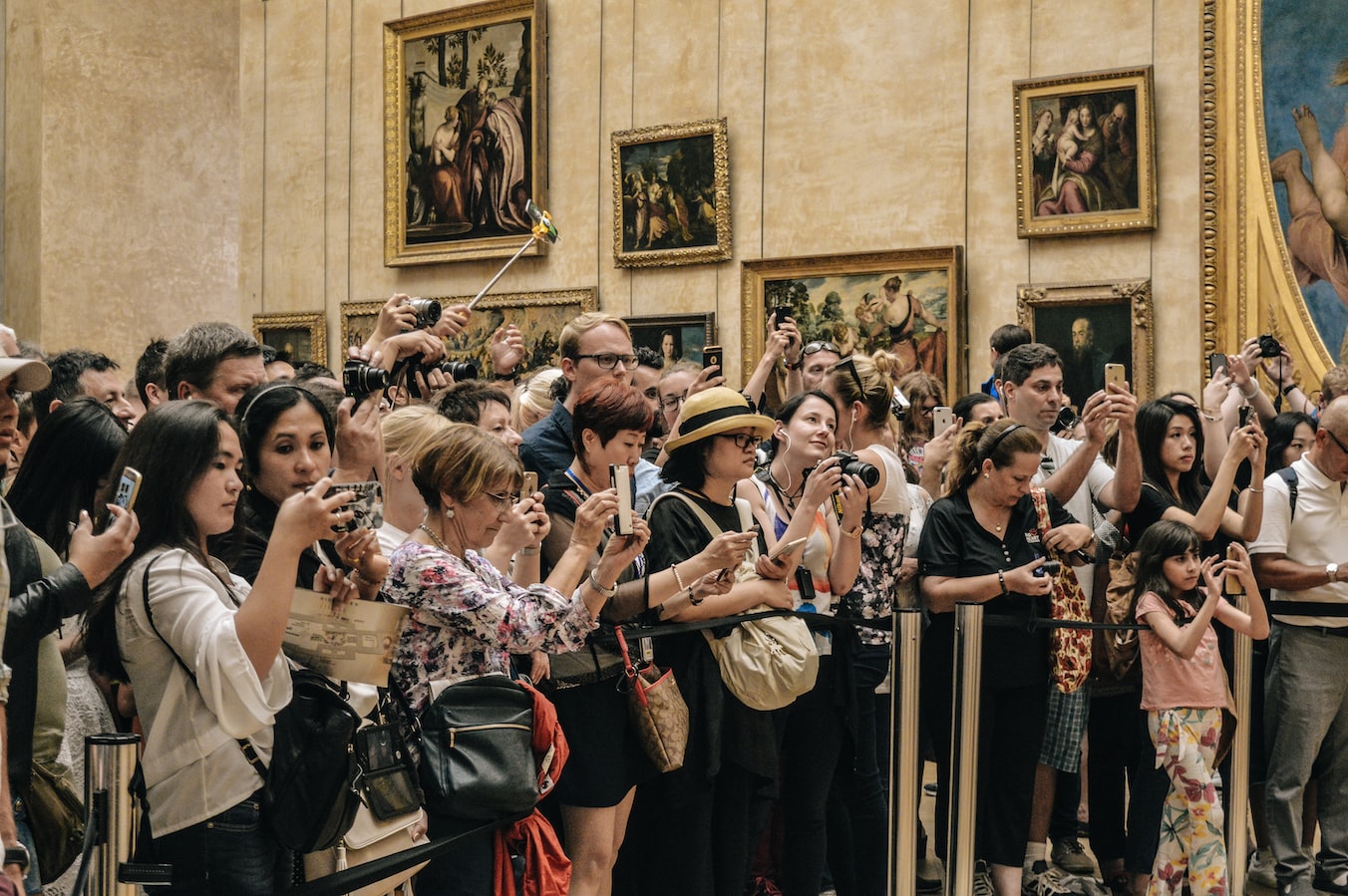 In short, it only takes a few drops to burst the dam wide open — or in this case, a single glitch to bring the palace to its knees. Already in 2018 the museum had to close down for several hours during Christmas and Easter vacation on days it received 40,000 or 50,000 visitors. The Louvre was built to accommodate 3 to 5 million people per year; it gets double that amount.

Those figures depend less on the museum than on the city itself; a third of all tourists in Paris make it a point to stop by the Louvre. It's possible that annual visitors to the museum could one day reach 12 million.

Some say the Louvre's management is handling the situation poorly, but the work isn't easy. It is stimulating, though: finding a way to handle crowds that the majority of France's 1,200 museums only dream of having.

Visitors who couldn't care less about the Mona Lisa still have to put up with the long lines.

Above all, it's the challenge of managing two often very different audiences: tourists and art-lovers. The path to the Mona Lisa, which passes by the iconic headless Winged Victory of Samothrace sculpture and the Grand Gallery, is about as noisy and dignified as a highway rest stop at the start of summer vacation. The rest of the museum, though, is a long series of rooms that are more or less full, silent, sometimes sparse.

Between the two groups, it's an unfair fight. Visitors who couldn't care less about the Mona Lisa still have to put up with the long lines. They have a right to wonder why the tourists and the Mona Lisa are so pampered by a museum which receives 100 million euros of state subsidies in accordance with its mission to serve the entire public. It is indeed a fact that many Parisians and French citizens, rightly or wrongly, no longer feel that the Louvre is for them.

The problem is much larger, and can be resumed by a scene in 1995 at the Fine Arts Museum of Bruges: the photographer Henri Cartier-Bresson set himself up facing van Eyck's Virgin and Child with Canon van Der Paele and, for a good half-hour, railed at every visitor who walked by the masterpiece without looking at it.

The large museums know this, but do little about it because they need to report ever-higher entrance figures each year, and fill their coffers — and the typical tourist pays without complaining.

Full price admission to the Louvre jumped from 7 euros in in 2000 to 15 euros today (17 euros if you reserve online, with a guaranteed entrance in 30 minutes). That's twice the cost of entry to a regional French museum, but still much lower than prices in other countries, and 40% of visitors (those under 18) don't pay at all.

In the face of mass tourism, major museums can think only in half-measures.

Let's throw in a laudable gesture: free nocturnal visits every first Saturday of the month, from 6 p.m. to 10 p.m., which attracts some 15,000 visitors, most of them residents of Paris and the surrounding region. We're still a long way from the strong stance taken by the Metropolitan Museum of Art in New York City: free entry to residents of New York State, and a $25 ticket for tourists.

Otherwise, in the face of mass tourism, major museums can think only in half-measures, like city mayors faced with air pollution peaks. They try to satisfy demand: expanded visiting hours, larger entrance halls, and so on.

Only the Spaniard Manuel Borja-Villel, who heads the Queen Sofia Museum in Madrid — which houses Picasso's Guernica — dared admit back in 2011: "Ever more visitors means nothing once the people can't see anything anymore." To handle the flux of people, the Louvre is considering making reservations mandatory. It even formally announced the measure for this fall — before backtracking, proof there's at least a back-and-forth. The advantage? "Fluidifying" the crowds of tourists. The disadvantage? Exasperating the art-lovers. 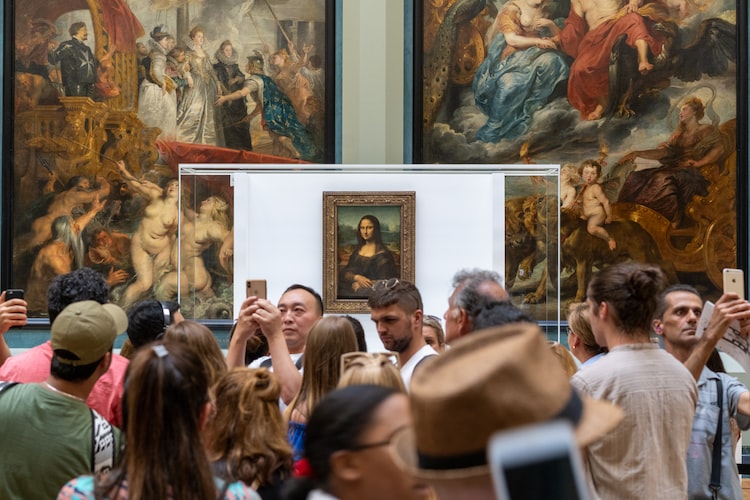 The result being that the museum website now strongly encourages would-be visitors to reserve online, the only way to guarantee entry during peak hours. And the public seems to have gotten the message, as a majority of tickets sold are now those reserved in advance online for a specific time slot.

There is a radical solution to turn the Louvre back into a "normal" museum: Give the Mona Lisa an autonomous space with a dedicated entrance. The museum's management doesn't want this, because it would run counter to one of its missions: Mona Lisa is the star of the journey, the reasoning goes, and tourists attracted by it — most of them in a museum for the first time — are induced to admire other paintings on the way. An illusive dream.

The public flocks to Mona Lisa, and rarely notices the Veronese, Titian, Tintoretto and Raphael paintings that any other museum in the world would dream of housing.