Italy To China To D.C., My Global Love-Hate Affair With Amazon

WASHINGTON — I loved Amazon when it first appeared. It was the 1990s, and I was living in Italy and then China, two countries that are strongly monolingual with a scarce number of foreign-language bookstores. Rome for instance, with three and a half million inhabitants at the time, had a couple of English bookstores and one French, with a modest selection. Foreign books were rare and expensive objects; Italy, to protect its cultural heritage, had a high tax on them despite promoting the translation of texts into Italian, and dubbing all foreign movies. Besides being expensive, ordering different books from bookshops came by unpredictable mail service, labyrinthine customs control and, therefore, extended delivery delays. All this, of course, was before the existence of the world wide web and the installment of the common continental currency, the Euro. When those shifts occurred, the obstacles evaporated almost immediately.

In China, before the age of the internet, it was impossible to order a book from abroad. The closest and the fastest way to get a fresh reading was to fly to Hong Kong, which to this day enjoys more press and cultural freedom than the mainland.

When the internet started traversing borders, I opened an Amazon account. It brought me, and anyone else who lived outside a metropolis of worldly culture, closer to the treasures of knowledge. Amazon eliminated travel planning and also saved me a lot of money. As naive and excited as we were to finally have access to this array, we thought of Amazon.com as God's gift to humanity, given to us for better access to information that improved our work and made us more knowledgeable, far faster than ever before.

My dependence grows exponentially by the day.

In spite of the high-speed accessibility changing our style of life at the turn of the century, book shopping in stores was still a pleasure. FNAC and Shakespeare And Company in Paris; Barnes & Noble, The Strand, in New York; Feltrinelli and Rizzoli in Rome; Joan Sandoe Books, and Foyles, in London; Tropismes in Brussels; even The Bookworm in Beijing, and many other bookshops — who could ever remember them all — were still places to get lost while leafing through the shelves, stopping to read a line here and there.

But things have changed dramatically. Virgin Records and other shops stopped selling CDs, and the many bookshops across bustling New York have closed down, as this piece reported in 2014.

I first became aware that shopping on Amazon was not only about the books when I bought my first tea online. Eight years ago, I'd settled in New York and quickly realized that I couldn't get my preferred English tea. Amazon saved me again; with online tea shopping, I broke a self-imposed taboo. I became a regular online shopper.

And it gets faster by the day. In the last few weeks, I've mostly bought books through Amazon, but also a long-distance cycling jersey, a Black and Decker cordless hand-vacuum, Fitbit charge bands, an MPow car phone mount, more PG Tips black tea, an obligatory Hawaiian party shirt for a lovely garden party, and a copper grill mat. I get my tennis and running shoes via Zappos.com, my shaving blades delivered from Harry's.

Just recently, I went to a favorite New York stationary shop to buy cartridges for my fetish fancy Montblanc Starwalker cool-blue fountain pen. It's a vintage pen that marked a turning point for the centenarian brand; I bought it at Zurich airport eight years ago, when I stopped buying printed newspapers. The Starwalker is a modern pen, it comes with different-sized nibs, and it's slightly heavy so that it rests well in hand. Using this kind of pen isn't merely about laying the words on lines of paper. Particularly in this digital age, it is more about feeling the friction of the paper, the effect of pressure on the nib, the ink flow; it's about the subtle sound of the metal as it moves across the paper. It's about ritual, and part of its ceremony is to replenish the ink cartridges at a specialized shop. But they no longer sell them, so again I had called on Amazon. 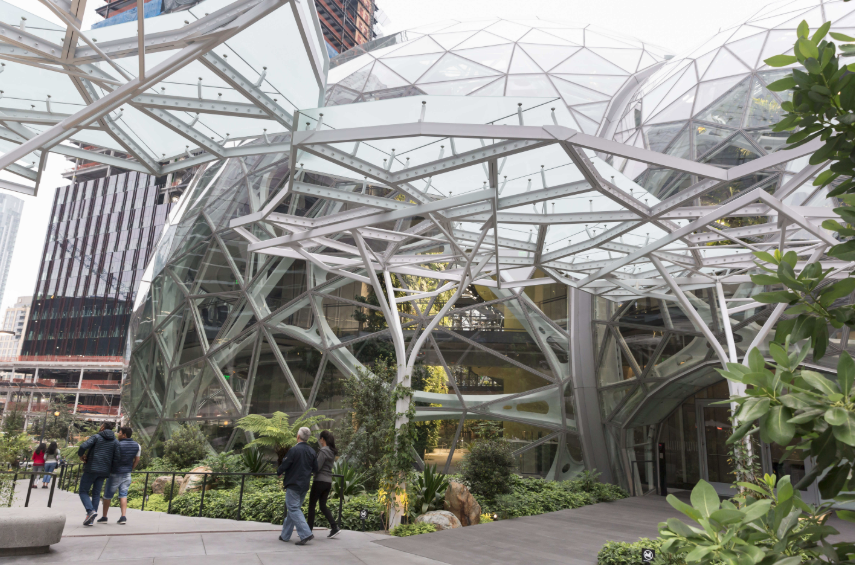 So even before last week's news about Amazon opening its second headquarters in Washington and New York, I calculated my dependence on the Jeff Bezos empire. I buy most of my books through his company, and I watch movies on its streaming platform, Amazon Prime; I shop at Whole Foods, which the company bought in 2017, and I subscribe to the digital edition of the Washington Post, acquired by Bezos in 2014. The amount of money I spend at the Bezos register, and the time spent shopping and using his merchandise, has become incalculable, entwined as it is with the mundanity of daily life. My dependence grows exponentially by the day, much along the same trajectory as the growth and efficiency of the company itself. And since Amazon is moving forcefully into both of the cities around which I gravitate, my bond with Bezos grows even stronger. The establishment of the headquarters will not only further impact my shopping habits but also hit on my taxes, a part of which will now pay for the benefit of having Amazon not just virtually but also physically closer.

But what would those benefits be?

The reports on the day Amazon announced its decision about the location of its new east coast headquarters, Amazon HQ2, touted the latest triumph. The economy is on the rise, and the expansion of the homegrown Amazon is a victory for the American dream, bringing the country 50,000 new jobs and more welfare. The first to cut this dream to size was TechCrunch, which broke down the myth of the glittering PR numbers provided by the company and cited as caused by local politicians promoting the deal. Amazon announced that it would invest $5 billion between Arlington, VA, and Queens, New York, creating thousands of jobs that pay over $100,000 per year. As TechCrunch and other media reported, however, tax contributors in both cities and states will spend $5.5 billion to keep Amazon in their courtyard. That is more than what Bezos will spend, and public money will be used to pay half of the employee salaries.

There are big real estate deals behind the projects, but there is also a lot of anger and skepticism about public money being spent to boost one of the biggest American corporations, further enriching the wealthiest man in the world. Questions of fairness and the monopolization of retail distribution–closing down small bookshops and entire shopping malls–must be considered as the company sucks in the dense and technologically skilled labor force. Amazon never spent a dime on training the people it prepares to hire, and will pay them with money that was meant for such education, critics say.

Also, for the first time, it is evident that the Washington Post is withholding its historically bold reporting, instead of publishing pieces that sustain its owner's newest project. The difference in coverage from the left-leaning Truthdig and The Verge could not be more significant.

This loss of faith is dangerous, but also warranted.

In 2012, during the Christmas shopping season, the media was fascinated by Amazon's secret success and its rapid transformation into a commercial behemoth, penetrating its warehouses and package assembly lines. Today, the appearance of the Soho Amazon shop in New York seems much less appealing. If nothing else, the chain of Amazon shops illustrates how brutal and purely functional our retail is becoming.

Still, shopping is the consequence of having earned money. The harsh competition between 238 cities to get Amazon into their courtyards shows the economic misery dominating the American marketplace, in which local governments must now compete for, then pay for, the monopolistic capital to come, their share being whatever is left for the welfare state.

ABOUT THE SOURCE
All rights reserved © Worldcrunch - in partnership with YONDER