Italian Alzheimer's Village, Where The Past Doesn't Exist

A facility that opened last year in the northern city of Monza offers residents a fleeting respite from the lonely, disorienting effects of dementia.

MONZA — "Rediscovered Country" (Paese Ritrovato) is a place that lives in the now. It's a small, enclosed, square-shaped village delimited by small, brightly colored houses. At its center are all the shops and services one might find in any provincial town: bar, church, minimarket, hairdresser, community recreational center. Before 10 a.m., when its four little streets are deserted, it looks like a movie set. Then, little by little, it awakens.

At the bar everyone asks for a coffee. "But we make it from barley," say the people behind the counter. "It's better to avoid caffeine."

Several women share a table. "Excuse me, ma'am, have you seen my purse?"

"She remembered that she didn't have it. That's a good sign," one worker notes with satisfaction. That's because the "Rediscovered Country" is an Alzheimer's village. It opened in 2018 in the Northern Italian city of Monza, and it hosts 64 people with dementia — 17 men and 47 women between the ages of 56 and 93.

Past and future don't exist here. "This place thrives on the sense of well-being we are able to create every single hour," explains educator and project coordinator Marco Fumagalli. "The other day a woman here attended William Tell, one of our opera performances, and was completely enthralled. After five minutes she turned to her daughter and said she was bored to death. Here, you live the moment and then it slips away — but we have noticed that the positive effects linger even if the memory doesn't."

Past and future don't exist here.

The goal of Alzheimer's villages (the most famous one being Hogewey in Holland) is to offer the sufferers and their families an alternative to treatment at home or in institutions, where in many cases the patient's daily life is limited to a room, at most a hallway.

"So far no cure has been found for Alzheimer's," emphasizes Roberto Mauri, director of the social cooperative La Meridiana, which created the Rediscovered Country. "So here the objective to at least guarantee a decent quality of life."

"When this disease is diagnosed, families try to care for the relative at home until the end, but that one-on-one relationship is complicated," Mauri continues. "Often it doesn't help the one who is ill, and it destroys the one taking care of him or her. It's not for nothing that Alzheimer's is called 'the family illness.'"

This village in Monza (a flat is 93 euros per day) is structured like a tiny hamlet: eight houses of eight residents each, with every house painted a different color for easy identification, then the bar, church, vegetable garden, hairdresser, and the recreational center offering classes ranging from carpentry to cooking.

The whole of it is enclosed, with an alarm that goes off if the gate is left open longer than necessary. "We try to make them feel at home, not like they're in a hospital," explains Fumagalli, who is still in his overalls after the gym hour. "No one here wears the white lab coats, and apart from the meals there's no mandatory schedule — everyone gets up when they want to."

We try to make them feel at home, not like they're in a hospital.

Does it work? Eighteen months after opening, the results are beginning to be seen, says geriatrics specialist Mariella Zanetti. "At home they would only interact with a relative or a caregiver, but here they're revitalized," she observes while several residents pick vegetables from the garden in preparation for lunch. "At our first monitoring we noted a reduction in behavioral problems, and in 25% of cases a reduction in the use of sedatives." 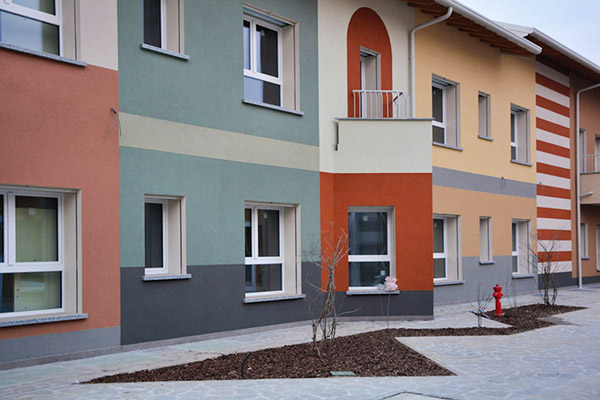 The village welcomes those in the initial or moderate stages of the illness, a period that covers "one or two years," after which a transfer to a protected unit or another institution becomes necessary. In one year, according to Zanetti's calculations, "the median cognitive score of the residents fell by three points, which is expected with Alzheimer's, but it came along with an improvement in well-being."

In front of the little church, Elena Panisi looks on her mother Elsa, 83, affectionately.

"This week she stopped remembering my name," she recounts with emotion. "These are stages we know will arrive, but it's still hard when it happens. Just like it's hard to accept this illness. When she was at home with us we felt very lonely — she only saw the caregiver and us, her children."

"You know, it's difficult to put conditions in place that are adapted to somebody on this path," the younger Panisi continues. "It's like we are asking them to respond to our demands of normalization, which is something they can no longer do. They realize this, and it causes them to shut down. Here at the village, she can still challenge herself to get involved as much as she can."

Making the choice to transfer her out of the family home was difficult, Panisi adds, "but then we thought about what was right for her, not whatever the outside world may think."

Papa would feel lost then angry. Here he has become free again.

Aldo is 85 years old, and his daughter Beatrice De Piccoli constantly covers him with kisses.

"I think in the beginning I was making another woman in the village jealous. She didn't realize I was his daughter," De Piccoli says.

"Here Papa has begun to live again, even to the point of falling in love. They were beautiful together, like two teenagers," she recounts, speaking about it in the past tense. "Then it ended, but in the sweetest way possible: They ended up forgetting about each other."

Aldo's illness surfaced after he had a stroke. "He was always a very social man, but at a certain point I began to notice he was confused, introverted. I started doing some research. I went to his regular bar, his church. "Tell your father we say hello, we haven't seen him in so long," all his friends would say. So where was he going? I felt like the world caved in on me," De Piccoli recalls.

Like everyone, De Piccoli tried to handle the situation by herself at first, then with a caregiver. "She was good, but untrained. She didn't understand his mood swings. Papa would feel lost then angry. Here he has become free again."

Beatrice smiles, a vibrant woman full of life who feels better today, albeit with the knowledge that "living with Alzheimer's is difficult. The person you love doesn't recognize you anymore, they don't recognize themselves. And you, when you're alone, you cry."

Mozart In Italy: The Journey That Launched A Child Prodigy