In A Beijing Park, The Cold Calculations Of Senior Dating

Loneliness, sex and economics rule among aging singles in the Chinese capital.

BEIJING — It's a day in May in Changpu River Park, not far from Tiananmen Square. Groups of middle-aged and elderly people are scattered around, looking for a date, a dance, a chat ... or just looking at each other. This scene plays out every Tuesday and Saturday, with the crowds ranging from several hundred to more than a thousand.

In the middle of the park's dance floor, a man, around 60 years old, wearing a pair of broad-frame glasses and a proud expression, is holding tight to a woman in a fluttering white skirt, dancing along to the song.

"Dirty old man! Everybody here knows that he only likes tall and pretty women!", says disapprovingly a woman of about his age, sitting next to the dance floor.

"All the men here are lascivious and evil," says Hu* bluntly. He himself often comes to play poker, to gossip, and to try out his luck. Maybe he'll bump into his ideal lady one day, he reckons.

In fact, Hu has a girlfriend, in her forties, from rural northwestern Gansu Province. She works as a dishwasher in a restaurant. She's constantly urging Hu to marry her, but Hu confesses that he regards her only as a "sex partner."

Back in 2016, Hu started coming to Changpu River Park's match-making corner, like a lost soul. His wife had died just six days earlier.

Hu was not unfamiliar with this corner. Only 20 to 30 meters apart from one other, two groups of people flock here every weekend. In the morning it's the desperate parents trading information about their unmarried offspring and arranging blind dates for them. In the afternoon, some of them move along to look for their own partners.

It was on that day that Hu made acquaintance with his first girlfriend. She too was from rural Hubei Province and 20 years his junior. She was working as a babysitter in Beijing.

She enjoyed being pursued.

"I used to come to this park with her. But there would be always old men coming up to give her their phone number and telling her they'd like to invite her out for dinner! It was like I didn't exist, and she obviously quite enjoyed being pursued."

But what really poisoned the well between them was her demand to buy a house in her hometown. "Why isn't my house good enough?," he kept asking.

"I had seen many times where some old fool married a younger woman he met in the park," Hu recalled. "Then after she has got her Beijing hukou (the household registration which guarantees social security) and a new house, she finds a younger lover and gets divorced."

His entangled relationship with that first girlfriend went on for half a year before they broke up. "She summed it all up: men look for sex, women for money. I asked her if there was no real love in the world. She said it does exist, though rarely," Hu recalled with a sullen smile.

This particular match-making game has its own set of ground rules.

First, one must possess a Beijing hukou.

Second, one has to own an apartment.

And then comes the retirement pension.

After hard economics, one talks about health and age.

It's hard for young people to get married, but even harder for us elderly.

Gege is in her 60s. She was wearing a crown-like wig and was dressed in a velvet cheongsam embroidered with gold peacocks and a pair of shoes decorated with beads and jewels. She's been coming here for a long time. She explains that the seniors' meeting place used to be in Beijing's Laboring People's Cultural Palace, and changed venue twice, until finally settling in this park.

"It's hard for young people to get married, but even harder for us elderly. I don't have any hope anymore", said Gege, adding that everyone comes with baggage from a lifetime.

So why is she still coming here?

"Though it's very unlikely I'll find somebody anymore, I still feel like there's something missing in my heart if I don't come," she said with a chuckle. "This corner of the park is like our kindergarten. It's good that there's a place to help a bunch of old children distract themselves and relieve their boredom."

Han Kang is the producer of "Choose," the BeijingTV marriage and date-fixing program for the middle-aged and elderly. From its début a decade ago, it has been a hit. "Looking for a spouse for the elderly is in essence a security policy for old-age" Han says.

But it's rarely easy, as the elderly have often forgotten how to fall in love. "They are also usually closed-minded and often very cautious with money and hope to enjoy this late-arriving happiness without paying for it." 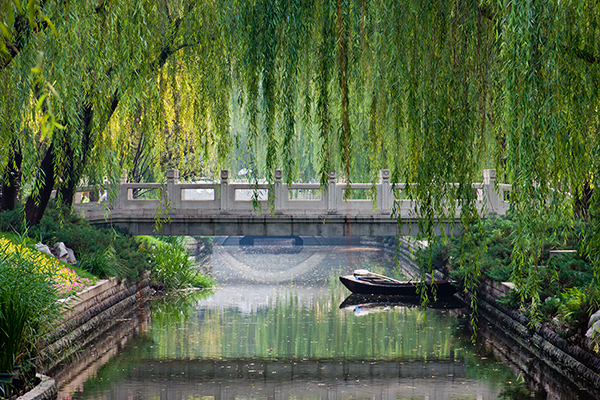 Divorced in 2002, Yue has had four girlfriends since, having most recently broken up with Hua last May after living with her for three years.

Though he has a very small monthly pension, he does have a Beijing hukou and a social housing flat with moderate rent. Hua, a 61-year-old migrant worker from the northeastern province of Jilin, regards becoming a Beijing resident as a vital safety net.

Hua met Yue the second time she went to the park corner. It was Yue who took the initiative, and with low revenue each, they decided that cohabitating would enable them to live better. Yet, after three years, Yue still hadn't propose marriage to Hua.

Tan Lin, director of the Women's Study Institute, noted in her study, "Growing Old in Cohabitation," that unequal economic status leads to an unstable male and female relationship dynamic. "Many women are so eager to live with a man that they believe his lies," Tan concludes.

In the view of Pan Suiming, the honorary director of the Sexology Department of Renming University of China, the Changpu River Park is not a microcosm of Chinese elderly, but of those "at the bottom of China's society."

Pan says that from the sociological point of view, there are always some people left alone. "Those people you see at the corner of the park are those abandoned by time and by life," he says. "They owned nothing before, and they lose nothing now."

*All names have been changed.

Coronavirus And The Global Cost Of Chinese Secrecy

The virus could have been better contained if China had not tried to hush it up at the start. Aut...