If Only Marie Kondo Could Clean Up My Social Life

If it doesn't "spark joy," the guest of the hit Netflix series "Tidying Up" tells us, get rid of it. Should the same lesson be applied to our circle of friends and acquaintances?

I have a friend I can't stand. It sounds mean, but that's how she makes me feel. Every time she writes me, calls me, wants to visit me, I'm annoyed. I just can't handle her. It's always been that way and I'm pretty sure it will stay that way. And yet, this friendship has existed for more than 10 years now.

We became friends a long time ago because she asked me — literally! — and I felt sorry for her. I know: wrong reason to make a friend. But it wasn't obvious to me then. Now I'm aware of it, but I don't know how to end our friendship.

All of this brings me to the subject of Tidying Up, the popular new Netflix series with Marie Kondo. At first, the series annoyed me. It seemed like just another minimalist-lifestyle guide, like something you'd find on YouTube. Nothing new really. But its so-called "KonMari" method, I came to realize, isn't like other minimalist manuals.

Kondo does not demonize the fact of having "too much stuff. She humanizes it. The Japanese host addresses each case and story differently with the adapted treatment. For people, everything is valuable in some ways, but they may have to say farewell to it. Especially when they answer "no" to the question: Does this "spark joy" for you?

And if I pose that same question about the people in my life?

The satiric web page Der Postilion recently wrote that, "Cleanup expert Marie Kondo recommends keeping a maximum of three family members." I read that and had a good laugh. And then I thought about it.

Obviously, with family we don't really have much choice. But when it comes to my social life as a whole, surely I'm allowed to make some decisions. Is it perhaps time to tidy up?

I'm not talking about dumping everything, as I did, for example, when I moved out of my childhood bedroom. Since the things I had in there weren't particularly dignified, I just threw out everything I could no longer use. This time, I'd like to sort things out by understanding and feeling. I want to really consider who makes me happy and who crushes me or constricts me.

We have to say goodbye to people that we never really liked.

I need to, actually, because the "friend" I mentioned before isn't the only person who, for some time now, hasn't been good for me. There are a number of ex-friends who really shouldn't be in my life any longer. And yet they continue to take up a lot of space. There are acquaintances who only contacted me once I'd started working in the media — so they could try to get their projects in the public eye. And there are friends who demand a lot from me, but want to give little back.

These are people who haven't "sparked joy" in me for a long time. And yet they put me under pressure. So yes, it's finally time to let them go, to sort my circle of friends and acquaintances the way Marie Kondo does with cupboards. Not that I want to throw all the people I'm dealing with in a pile, as Kondo always does with things at the beginning of each episode. But a list of names might be good. I can start by writing down all the people in my life and then decide: Who do I really want there? 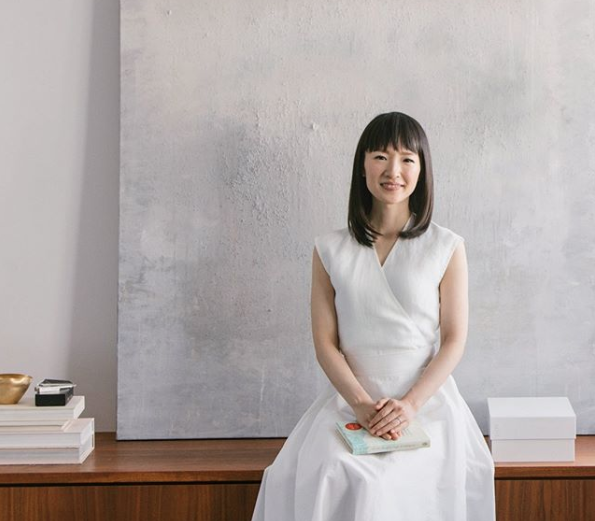 Those who'll make the cut and remain will have more space in my life. They will each have their own place in it, one that is reserved for them, where I can appreciate them, where I can rely on them and find them when I need them. But this space can only exist if other spaces become free.

We have to say goodbye to people that we never really liked, people we often neglected miserably. After all, who really needs a friend who'd only show up when she felt obliged to? This step is tricky, though, which is why a little help from Kondo wouldn't hurt. Somehow she manages to do everything — even disposing of things — with an almost excessive amount of respect and care.

Kondo expresses gratitude to every object before it is jettisoned. And while it may be overkill when you throw things away, the KonMari method is actually perfect for tidying up your circle of friends. Indeed, it would be amazing if this woman came knocking on my door and helped lead me though this process that I've put off for so long.

Obviously that's not going to happen. Still, I'd like to use Kondo as an example. And as a starting point, I'll probably start with the friend I first mentioned, since she isn't really a friend at all. I want to explain to her that I am very grateful to her for liking me, but that I'm not available enough to keep the contact going. And probably, I won't just be doing a favor just to myself. I'll also be freeing up space in her life so that other people can enjoy her more.