Because No One Wants To Imagine A World Without Chocolate

Too small and not productive enough, cocoa plantations can no longer meet global demand. Industrialists are intervening to help the farmers and save an indulgence beloved the world over.

MUNICH — Andreas Jacobs and Paul Polman want to change working conditions and pay around the the world. But they're not human rights activists or union officials. They are instead captains of the chocolate industry, which is struggling to keep up with global demand because cocoa planters are suffering from poor pay and lack of modern production.

"It's time to put an end to this system in which money and profits are stuck on one side of the chain while people on the other side are still living in extreme poverty," explains Jacobs, head of multinational consumer goods company Unilever.

Polman, head of Barry Callebaut, the global leader of chocolate products, is in total agreement. "We can't keep on going indefinitely exploiting these poor cocoa farmers," he says. "We must guarantee them decent living conditions at the least. We have the responsibility of improving the daily life of 40 to 50 million cocoa planters throughout the world."

At first, hearing them worry about the fate of these small farmers is surprising. But there's another and very real concern behind the words of these two managers. "It's when we registered a cocoa demand greater than global production for the fifth consecutive year that everyone became aware of the problem we're facing," says Jürgen Steinemann, general manager of Barry Callebaut, the company that emerged from the fusion between the French Cacao Barry and the Belgian Callebaut in 1996. "It's impossible to replace cocoa to make chocolate." And this shortage is starting to have a real impact on chocolate makers.

To meet this year's 50% increase in cocoa prices, top U.S. candy manufacturer Hershey's raised the prices of its chocolate products by 8% last summer. Its rival Mars (Mars, Twix, Snickers, M&Ms) quickly followed by increasing its prices an average of 7%. Such increases soon impacted sale figures. Mondelez, which owns Cadbury, Côte d'Or, Milka and Toblerone, has already registered a 1.9% decline in the second quarter on its European income, as some distributors decided to boycott its products claiming they have become too expensive. It doesn't seem like this will change anytime soon, and the cocoa shortage could intensify in the next few years.

"Nothing has changed in 50 years"

"Between now and 2020, the demand for cocoa will exceed global production by 1 million tons," warns KPMG's John Andrew Morris. This deficit is huge, especially as global production in 2013-2014 is expected to barely reach 4.1 million tons. Emerging countries are consuming more and more chocolate treats. In 2020, the sales of chocolate products in these markets "will be higher than in developed countries," says Goldman Sachs' Damien Courvalin.

In Brazil alone, chocolate sales are expected to reach $18.5 million in 2017, similar to figures in the U.S. The Chinese market is growing 6.8% every year. "If every person in China ate one extra chocolate bar every month, we'd have to find 255,000 more tons of cocoa beans," says James Walton, an economist for the research company IGD. To increase global production by 7%, planters would have to plant more than 638 extra hectares (1,576 acres) of land, an almost impossible goal.

"In the next 40 years, we will have to produce as much food as in the eight last millenniums," explains Aalt Dijkhuizen, a professor at Wageningen University in the Netherlands. "Global food consumption will double between now and 2050, and 90% of this increase will come from Africa and Asia." But "farmable land will become rarer in these regions, and competition between the different raw materials will increase," the professor adds. Yet, these two continents account for nearly 90% of global cocoa production. It is now easier to understand the concern of chocolate makers, who fear that small farmers might favor other crops.

In the Ivory Coast and Ghana, which account for 55% of global cocoa production, thousands of farmers have already removed their cocoa trees. Harvested twice a year, these trees have given way to rubber trees, which provide farmers with income 10 months out of the year. With one hectare (2.5 acres) of cocoa trees, they barely earn 1,525 euros per year, while the same surface area of rubber trees will produce the equivalent of 5,800 euros. In addition to this, three people are required to take care of one hectare of cocoa trees while just one can work on and harvest three hectares of rubber trees.

But this situation could have been prevented if farmers had help modernizing. "It's a huge waste, a real suicide," says Robalé Kagohi, Ivory Coast program coordinator for the International Cocoa Initiative (ICI), an association that fights for ethical working conditions in cocoa production. "Cocoa planters have been crucial to the Ivorian economy, but they have not received anything in return. They're still poor, and an estimated 350,000 children are working in plantations. Farmers continue to do all the work with machetes. Nothing has changed in 50 years."

On plantations, farmers live in huts, often without water or electricity, and children in tattered clothes help work. This single-crop farming has also devastated the environment. "There's barely a tree left in this area," says Kouadio N'Goran, the Barry Callebaut supervisor for the San Pedro region. "Everything disappeared in less than 20 years. Erosion got worse, and arable pieces of land have fallen into rivers, which are now yellow." Elephants and chimpanzees also lived in numbers in the area, but they have also disappeared.

"It's not really surprising that young people don't want to get into this type of farming," says Barry Parkin, head of the World Cocoa Foundation (WCF).

Stephen Opuni, executive director of the Ghana Cocoa Board (Cocobod), the public agency that has a monopoly on the imports and exports of cocoa beans in this Western African country, adds, "They prefer leaving for a life in the city rather than staying in poverty on their parents' land."

Chocolate makers are multiplying their initiatives to increase productivity of cocoa planters. "Most of the trees are old, ill and poorly maintained," saus Gerry Manley of Olam International, a very powerful cocoa trading company. The first priority is to plant young cocoa trees, but the scale of this task is huge. "We're going to have to plant 500,000 hectares between now and 2050 to meet the demand," which amounts to 200 million trees a year, the Goldman Sachs expert warns. 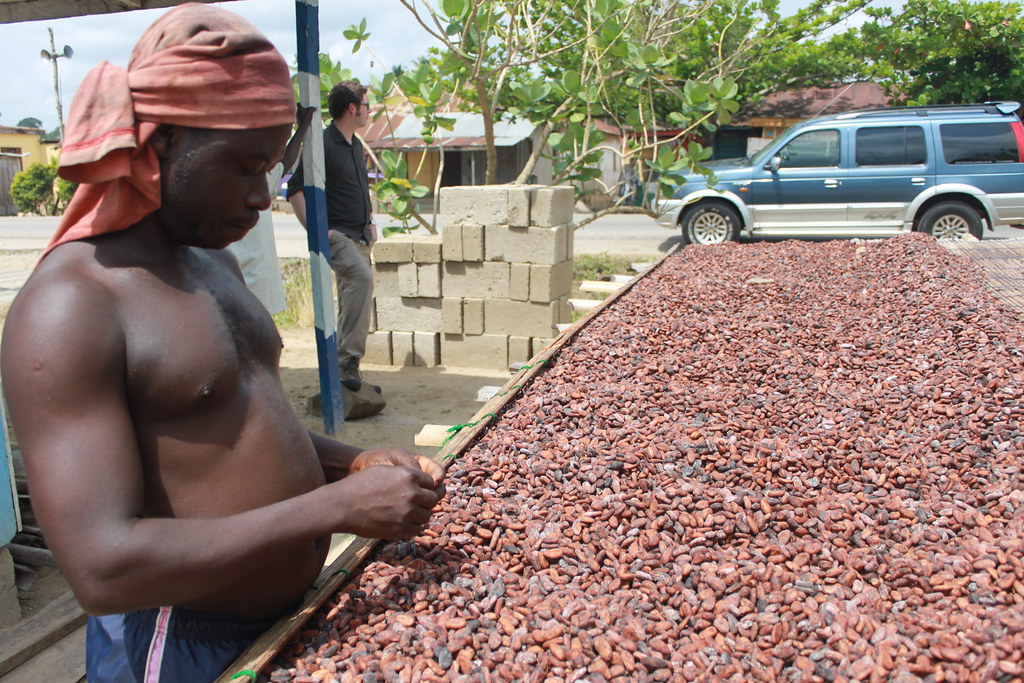 Another solution is to resort to grafting, which can increase annual productivity of a plant from 300 to 1,300 kilos of cocoa. Barry Callebaut has also developed an entirely natural "magic potion" that reduces the bean fermentation period from 7 to 4 days and at the same time eliminates the 20% "loss" that this process generally includes. Some countries, such as Ghana, have also started offering free fertilizer to planters to increase their production. And multinational companies are investing large amounts of money in training farmers.

In Pacobo, an isolated village between Abidjan and Yamoussoukro, Barry Callebaut recently inaugurated a 30-hectare (74-acre) "center of excellence" to teach cooperative managers and agronomists the latest techniques to improve their plantation productivity. Around 300 people are participating in courses there this year. Five times more will be trained in "academies" located closer to the plantations. In 2013, 110,000 Ivorian farmers followed a course in the "field schools," where educators come under the cocoa trees to "spread the good word."

In the scientific field, almost everything remains to be done. "Since the 1930s, the average productivity of a corn field has gone from 500 kilos to 3 tons per hectare," says the WCF's Barry Parkin. "In cocoa, we've been stuck at 400 kilos for more than 80 years." Industrialists are starting to fund research programs to understand this unique plant better. The amount of work is huge. Barely 20% of the 100,000 chemical components of cocoa are known.

Faced with this urgent situation, the industry's 12 largest groups decided in May to unite their efforts in an initiative called "CocoaAction" to professionalize the production of these growers, to fight against the "swollen shoot" virus that's decimating cocoa trees, and to improve the living conditions of the farmers. "We had to stop wasting resources by doing everything each on our own," says Olam's Gerry Manley.

By 2020, CocoaAction hopes to work alongside 400,000 Ivorian and Ghanaian producers. "It's good, but that number needs another zero to change the situation on the ground," says Oxfam America's Jonathan Jacoby. And they need to tackle the key issue: money.

According to Oxfam, planters today receive just 3% of the final sale price of a chocolate bar. This ridiculously low amount doesn't allow them to rise above poverty. Chocolate makers say they don't want to influence the global prices of the raw material on which they rely. "Only in the cocoa industry are prices a taboo topic," says Massandje Touré-Litse, general manager of Ivory Coast coffee-cocoa council. "Producers mustn't be the social rejects and the weak links of this supply chain anymore. We can sit down with the industrialists to talk about child labor, but it's impossible to talk about money."

But it is high time to talk about these "sensitive" topics. Says Unilever's Paul Polman, "If you don't sell sustainable chocolate, you won't be in this business very long because you won't be able to find beans on the market, and customers won't buy your chocolate anymore."

They shall not pass: Since July, soldiers have stepped up patrols along the country's 1,600-km border with Mali and Burkina Faso.

In Ivory Coast, Stars Campaign To Keep People From Emigrating

ABIDJAN — Jumping and dancing to the rhythm of the popular urban music zouglou, they snap pictures on their smartphones of their idols performing onstage. Always smiling and never sitting ...