A Boxing Gym As Bridge Between France And Senegal

After earning fame and fortune in France, fighter Souleymane Mbaye made good on a promise to open a professional-level boxing club in Dakar.

DAKAR — The blows come fast and furious. The leather of the punching bag pops. The chains holding it in place grind and groan as Idrissa Gueye, 24, unleashes his fists — along with cries of exhaustion mixed with rage. "Go again, no time out!" yells Souleymane Mbaye, his coach.

Both men are dripping in sweat. It is the middle of the rainy season in Senegal, and the sultry, late-September air makes every move difficult.

This is exactly the kind of intensity Mbaye was looking for when he opened Keur of Champions boxing hall, in Dakar, in February 2018. The only facility of its kind, this "House of Champions" looks to forge the elite African boxers of tomorrow. But it's also about offering young people alternatives in life — "so that they can avoid taking the wrong steps," Mbaye says in reference to the many Senegalese who risk their lives trying to migrate illegally to Europe.

French with Senegalese origins, Souleymane Mbaye — Souly, as his friends call him — has an impressive resume. A three-time world champion, he has 20 years of boxing experience under his belt and a record of 42 victories (22 by knockout) in 49 fights.

Two years ago, at age 40, Mbaye hung up his gloves, wrote a book (Le Sénégaulois), and was featured in the poster for Samuel Jouy's 2017 film Sparring with Mathieu Kassovitz. But after all that success, he also remembered a promise he'd made to a friend, Mbaye Jacque Dio, former mayor of the commune of Rufisque in the suburbs of Dakar. His pledge was to create a boxing gym in Senegal and professionalize a pool of previously untapped talent.

Boxing has only ever had one Senegalese champion, Battling Siki, who shocked the world in 1922 by defeating Georges Carpentier in legendary fight in Montrouge. And except for the famous Mohammed Ali vs. George Foreman bout in Kinshasa, in 1974, there have never been any big fights in Africa.

Nevertheless, Senegal adores boxing. "It's the favorite sport, above all the others, even football," Souleymane Mbaye explains. And now, the country finally has the infrastructure to host and organize major events. The Dakar Arena has just been completed along with the new international airport.

In the training room, 15 boxers are at work in both rings from morning to night. "First, we make sure their basics are solid," says the coach. "Then they work the accessory stuff, the footwork, and after that each fighter can develop his particular technique. But if the fundamentals aren't there, we lose."

Three of these young fighters benefit from special treatment. Due to their high potential and sometimes disadvantaged origins, they are housed, fed and paid by the club. They also meet regularly with a physiotherapist and dietitian. "I want to have them at 100%, know what they eat and when they sleep," says Mbaye. 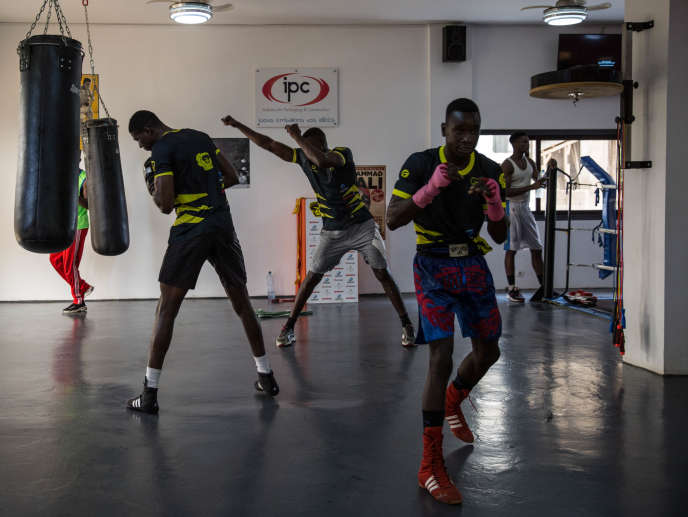 Idrissa Gueye (in the foreground) trains with peers in their club on Sept. 20, 2019, in Dakar — Photo: Matteo Maillard/Le Monde

His focus is on the Youth Olympic Games in Dakar in 2022. The coach wants to send four or five young fighters there to win "at least one medal," which would be a first for Senegalese boxers.

Of the three, Idrissa Gueye stands out most. He wavers near the ring, encourages his comrades by shouting, winnows, falls backwards when an action amazes or displeases him. He cannot help reacting like when he was a child, back when he preferred studying knockout videos at the cybercafe rather than play football with his friends.

The young man fought his first professional match on Oct. 12 in Paris against Georgian fighter Irakli Shariahshvili. He won in the fourth round by decision. "Boxing is my life! I don't do anything else," he says.

There are reasons why Mbaye presses him so much, and why the young boxer obeys his coach until exhaustion. Gueye wants to give everything to the man who "saved" him. A few years ago, after he was disqualified from the African Championship because of a 200-gram weight difference, the coach reached out to him on Facebook. "Keep your chin up champion! The first opponent is weight."

Gueye says the message gave him "the strength to believe" — right when he was ready to throw in the towl.

Since then, he's twice been runner-up to Africa's boxing champion. He's considered the best Senegalese boxer under 60 kg, and won the silver medal at the Africa Zone 2 Championship. And that was only eight months ago, when Gueye decided to join "team Souly."

Boxing is my life! I don't do anything else.

"He's a technical boxer, lanky and proud. He knows he can succeed," Mbaye explains. "If he wins his first fight, he may earn a contract in France, but will continue to train here. If we want them to stop thinking El Dorado is elsewhere, we must show them that we can shine at home."

To prepare for his first fight, Idrissa Gueye trained with the only woman on this men's team, Khadija Timera, 34, a brilliant French-Senegalese who divides her life between the ring and her investment consulting company, where she works as a lawyer.

After a childhood spent in Levallois-Perret, in the Paris suburbs, and after earning degree from the University of California, Berkeley in the United States, she went into boxing.

Boxing and women "don't really match," she admits. "In Levallois, 40-year-old boxers told me, 'You're very cute, but here it's for the guys.'" But Timera stuck with the sport regardless, training at the club Foch 50 on the Champs-Elysees, in Paris.

And now, after winning a handful of competitions and being named to Senegal's national team, she has finally earned the respect she deserves. "Stress management is essential," she says — in both business and the ring.

Her next big challenge will be the Tokyo Olympics in 2020. The qualifiers took place in Dakar, this past in February. In the interim, she is trying to meet coach Souly's fierce by necessary expectations. She also did a recent demonstration in the ring for France's minister of sports, Roxana Maracineanu, who visited Dakar last month and wants to collaborate with Senegal for the 2024 Olympic Games, in Paris.

For Souleymane Mbaye, the visit was an opportunity to show off the bridge he's already help build between the two countries. "I created this club with my own funds, not only for sport, but also to save lives," he says. "I wanted to provide goals, education and a framework to troubled young people who think there's nothing positive to keep in Africa. Now I'm hoping the French government to help us financially."

"It's in everybody's interest to help young Africans here," he adds. "If we brighten their future, they won't take the risk of migrating."

Not everyone will become champions, of course. Mbaye is the first to admit it. "But the boxers might then open up a gym in their own village, give others a purpose, a challenge. Like me, I was proud to fight for France. I would like them to be proud to represent Senegal."

In Senegal, An App To Tackle Violence Against Women

Femicide is a major problem in the West African country. A French entrepreneur of Senegalese orig...

On the coast of Senegal, fish stocks have fallen 80% in the past year alone. The women fish proce...