The Awkward State Of Being Greek In Germany Right Now

MUNICH — Three large cranes stand tall against the blue sky, but they're standing still. At the construction site for the Greek school in Berg am Laim, a southern borough of Munich, all work has been temporarily halted. A red excavator lightly scrapes the brown soil with its shovel, rusty iron rods protruding from the shell of the building. It looks a bit like some Greek beaches, where half-built buildings remain unfinished, investor money having run out.

Fourteen years ago, the city sold the more than 15,000-square-meter plot of land at Hachinger Bach Road to Greece, so that a central Greek school might be built for those in and around Munich. Only recently was the Ministry of Education and Religion in Athens able to begin work on the building. But Greece is already embroiled in litigation with the city. The future of the school remains uncertain.

It's a Greek tragedy writ small, but ever symptomatic of the European drama of our time.

On a Monday morning, a young Greek man in a black leather jacket crouches in the S-Bahn heading towards downtown Munich, cramped up in his window seat, a cell phone wedged between his ear and shoulder. Only a soft, indistinguishable soup of words can be heard. "No, no," he repeats softly. "Yes, yes," his interlocutor yells into the phone at the other end of the line. The two speak to each other in Greek.

Gradually, a few German words begin to tumble out: "the height of cynicism," "election promises," "Troika," "Europe." This is of course the vocabulary of the Greek crisis, and is a talking point in Munich. Throughout the city, small groups gather on street corners, discussing. "Listen," says a Greek at Ostbahnhof to two women with Aldi bags. He says he also doesn't know what's happening. The Greek banks have been closed since Monday, and his relatives can only withdraw 60 euros a day.

"What's the point in me transferring 400 euros to my mother in Greece tomorrow?" Constantinos Gianacacos is sitting in a cafe at the Odeonsplatz wearing a white-and-blue striped shirt. "In recent days I've been worried: How can I take care of my mother in Greece?" After decades of living in Germany, she returned to their village in Trikala, in northern Greece. She's in her mid-80s now.

He also has an uncle in Athens, also retired. "Of course we worry," says Gianacacos. He heads the Evangelical Migration Center in Munich. He and his team members help Greeks who are no longer able to survive in their homeland and come to Munich. In the last four months, noticeably fewer people have arrived, he says. "But I reckon another exodus is coming."

Recently, many people from Greece have called to ask if they should come to Munich. "I have advised all of them not to come, because of the housing situation here," says Gianacacos. Only those who already have relatives here are likely to make it work. But many young graduates continue to make their way to Munich from Hellas.

"There is a huge capital transfer taking place," he says. Many people who left Germany to return to Greece are now coming back. Five years ago, there was a large wave of Greeks who returned to their former home. Now, there are 8,000 more Greeks in Munich than there were in 2010. They represent the largest population of EU citizens in Munich after Croatians. Currently, there are 26,400 Greek nationals officially registered in the city.

The gods of finance

Many of them meet with each other at Orthodox church services, like the one at the Church of All Saints on Ungerer Street, opposite the North Cemetery. "We pray in the community together and on our own that God protects us from a Greek exit," says Archpriest Apostolos Malamoussis. The 68-year-old struggles with the fact that he counted on a solution to the crisis, with the final standoff coming as "a big shock." 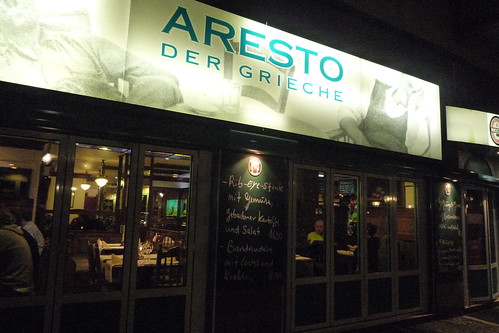 Malamoussis was already lighting candles on Greek-Bavarian Culture Day on June 21, praying for a good outcome for the negotiations. He received loud applause from both Greeks and Bavarians. There must be an agreement, he stressed, anything else would be a disaster. He didn't assign blame, but called upon the Greek government to try harder.

Manolis Manussakis, 59, works with a lot of Greek restaurateurs in his role as manager of the Greek delicatessen wholesaler Atlas. He's also a host at a local theater on Elisabeth Square. "Opinions among the Greeks in Munich are very divided," he says. "But all are very anxious about what the future holds."

The crisis currently looming over Greece can be seen as "a big cold spell, at least symbolically," he says. The euro provides a major import benefit for Manussakis' company. But then again, he says, there may be no escaping the big bang. "For Greece to take on new debts that it won't ever be able to pay makes no sense," he says. The system is broken and needs to be started from scratch. Without a clear break, he says, nothing will ever happen. In this respect, he understands the Greek government's decisions very well.

Many other Greeks in Munich feel the same way these days. Niki Chatziparasidou is at the café of the Greek House in Munich's West End neighborhood, standing at a metal bar table. In front of her is a leaflet advertising dance classes: "This is how Greece dances," it reads.

"We shouldn't lose hope," she says. "I can't imagine a Europe without Greece in it. I don't think Greece is going to break."

Chatziparasidou says she can feel unrest among her compatriots, but little anger toward the tough German stance. On July 4, a street festival will be held at the Greek House, as it has been held for four decades. From the best of both worlds, Munich's Greeks know how to party. Even during the final act of a great drama.

Environmentalists and beer companies have common cause to oppose new tax rules that may reduce the level of recycling.

For areas like the Mediterranean basin, tourism is huge business. But it's also an inordinate source of plastic pollution.