With billions in investments and a land distribution scheme not unlike the Homestead Act, in the U.S., Moscow is looking to revive a long-neglected region.

VLADIVOSTOK — For Dmitry Igumnov, the Kremlin's conquest of the Russian Far East didn't just impact his career. It changed his life. A businessman who worked in all corners of the country and even spent a few years in California, he decided, in the end, to put down roots and to "start from scratch" in his native region, in the extreme eastern part of Russia.

Here, across 6 million kilometers, live just 6 million inhabitants. Like 100,000 other citizens from other parts of Russia, Dmitry Igumnov, 52, volunteered to take part in an unprecedented government program: to freely obtain a plot in the middle of the taiga, an area of boreal forest that had been neglected by the authorities since the fall of the USSR and forgotten by investors for more than two decades. In just over one year, some 30,000 pieces of land have been distributed. The chosen ones have five years to fulfill their mission: to develop and to create. Otherwise, the government can take back what it gave.

Together with his brother and the rest of his family, Igumnov was given a total of 10 hectares less than a two-hour drive from Vladivostok, the vibrant Far Eastern capital. In the city, the former marketer still manages his ice factory. But now, at the same time, he is also developing a new business on his new estate: Over the past year, he's invested 500,000 rubles ($8,000) in flower fields and beehives to produce honey.

"The business plan is ready. We need to grow to 100 beehives, then to 500, produce 10 tons annually, and start exporting," Igumnov enthusiastically explains.

By 2025, 110,000 jobs will be created in these regions where, after development under the USSR, nothing more happened.

The entrepreneur thinks big. As he walks us across his land in the middle of nowhere — a former potato kolkhoz (collective farm) that hadn't been plowed in almost 30 years — Igumnov recalls his long learning process regarding bees and beehives. He consulted specialists, read books. But even so, there were some rookie mistakes, like when his first beehives, placed too close to the edge of the forest, were taken away one night by a bear. Russia's Far East is a wild place.

"The United States did the same in their time with Abraham Lincoln's Homestead Act," says Valentin Timakov, who heads one of the government agencies in charge of developing the Far East. That piece of legislation, a key factor in America's conquest of the West, is a reference for the authorities in Moscow who are trying to orchestrate the revival of the Russian Far East.

"This free land plan has already led to the creation of new businesses, from food production to tourism and, of course, industry," Timakov explains. "But it's only one of our many projects. By 2025, 110,000 jobs will be created in these regions where, after development under the USSR, nothing more happened."

His agency, created just two years ago, has launched numerous initiatives to attract skilled workers from the western regions and bring back the eastern locals who left during the crisis years. In Vladivostok, business is booming, with 7,000 senior management vacancies still waiting to be filled. 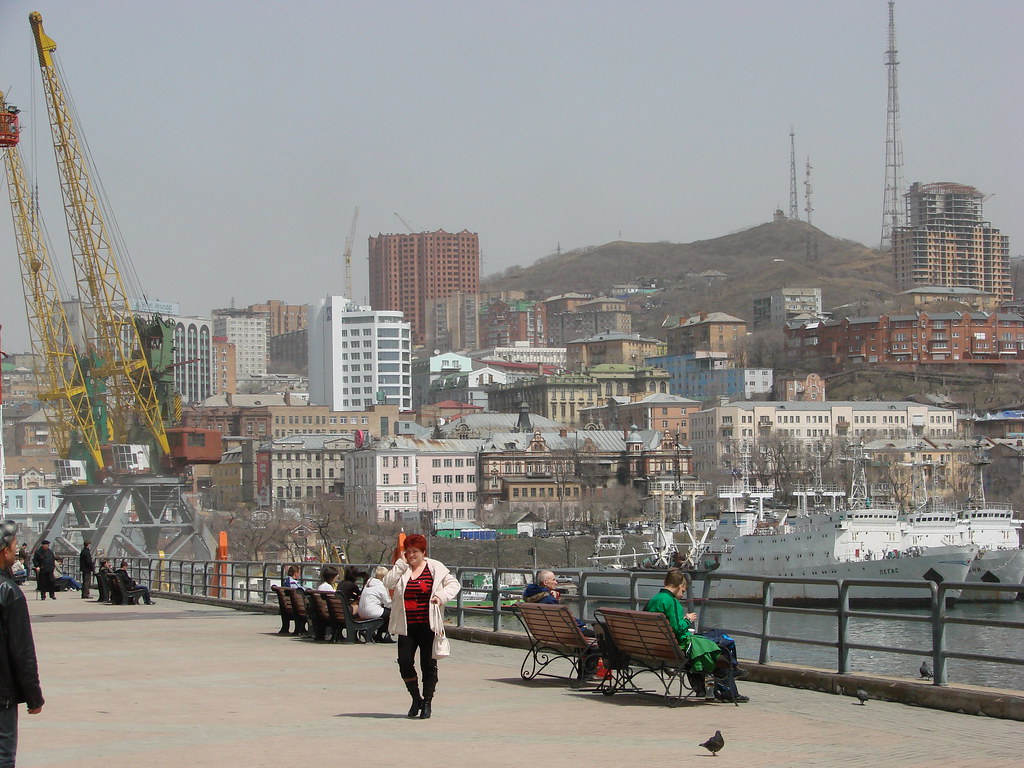 As it often happens in Russia, the program comes from the very top. With barely veiled references to the enthusiasm of the forced developments that took place during the Soviet era, the Kremlin hopes to trigger the same sort of dynamics, "from top to bottom."

In 2012, when Vladivostok hosted an Asia-Pacific Economic Cooperation (APEC) summit, Vladimir Putin spent an estimated $12 billion on huge construction projects in and around the city: bridges, an airport, roads, even a new university. On Russky Island, located opposite the city and former location of a military base, brand new buildings have been erected to accommodate up to 50,000 students. A magnificent (but costly) cable-stayed bridge was built over the Eastern Bosphorus to connect the island to the city. And to encourage the mobility of investors and senior managers, the state-owned company Aeroflot sells reduced price tickets between Moscow and Vladivostok. The eight-hour flight costs the same as a flight to the European capitals.

"When the Kremlin started this conquest of the Far East, many in Moscow as well as in Vladivostok were skeptical. But five years later, the results are plain to see," says Maxim Shereykin, who heads a high-tech development agency. "Renewable energies, energy efficiency, microgenerators … Here too new technologies are emerging," he adds. "It takes time. The government is pushing for it and that's good. But the political pressure to show better results quickly at all costs can also turn out to be counter-productive."

Vladivostok has also become one of the platforms for Moscow's new diplomacy. In September, far away from the increased tensions with Europe and the U.S. resulting from the 2014 annexation of Crimea, Vladimir Putin chose Vladivostok to receive Japanese Prime Minister Shinzo Abe and South Korean President Moon Jae-in. Behind the knowing smiles and the calls for investments, Putin was showcasing the Kremlin's shift to the east.

Still, many obstacles remain on the path to economic recovery. Though it's surrounded by Southeast Asian poles where activity is booming, Russia's Far East remains an isolated and inward-looking market. What's missing in these regions where political and economic authorities are omnipresent is real competition.

Here too new technologies are emerging.

Beyond the arteries built in Vladivostok, transport infrastructure is aging, even if new harbors and roads have been built. As for investments, national financing sources are limited and calls made to the powerful neighboring nations China and Japan haven't yet led to substantial changes. And yet, the Far East is also serving as a model of what's lacking the most to modernize the Russian economy as a whole: an entrepreneurial spirit. Small and medium-size businesses account for just 20% of the activity nationwide and just 2% of Russians say they would like to start their own business.

Not so in Vladivostok, which is becoming a hive of activity. Alexander Chumatov is a case in point. After studying and working for years in Moscow, he returned to Vladivostok, his birth city, and, together with a partner, has invested $5 million (half of the sum came from the state-owned bank Sberbank) to develop a new network of private health clinics — in a region where health-related infrastructure is in desperate need of renovation.

"My friends back in Moscow think I'm a bit strange, but I believe in this project," he says. "Back there, I was an employee [as a fusion and take-over consultant]. Here, I've been trying my hand at entrepreneurship. And it works! There are real opportunities to be seized."