In Russia's Orbit, Searching The Sleepy Economy Of Armenia

YEREVAN — There used to be trains that connected Moscow and Armenia's capital of Yerevan. But for different reasons, mostly an array of regional tensions in former Soviet republics, Armenia is no longer connected to Russia by rail.

To get to Yerevan from Moscow, you can either drive for 48 hours through the North Caucasus and Georgia, or you can take a flight of less than three hours. I chose the latter.

The entire time I was in Armenia, I was struck by how calm it was. The country has the lowest crime rate among all of the former Soviet states, and has a per-capita crime rate nine times lower than Russia’s. What’s more, 90% of the criminal activity in the country happens in Yerevan, the capital. But that is Armenia’s best statistic. In terms of its economy, Forbes ranked Armenia the second-worst economy in the world in 2011.

Indeed when people learned that I'd come here to write about Armenia’s economy, the response I got over and over again was something like, “Wait, you are trying to write about something that doesn’t exist.”

According to the 2012 census, Armenia has 3.2 million residents, 3 million of whom live in the country permanently. But according to the economist and former Yerevan Mayor Vahagn Khachatryan, Armenia has closer to 2.2 to 2.5 million residents. “Our GDP is around $10 billion,” Khachatryan says. “Private transfers — remittances sent back from Armenians working abroad — make up $1.8 billion per year. That sum doesn’t take into account the money that is brought back in cash. If you count the cash transfers, I think it would add up to $2.5 billion per year.” He estimates that 90% of that money is coming from Russia. 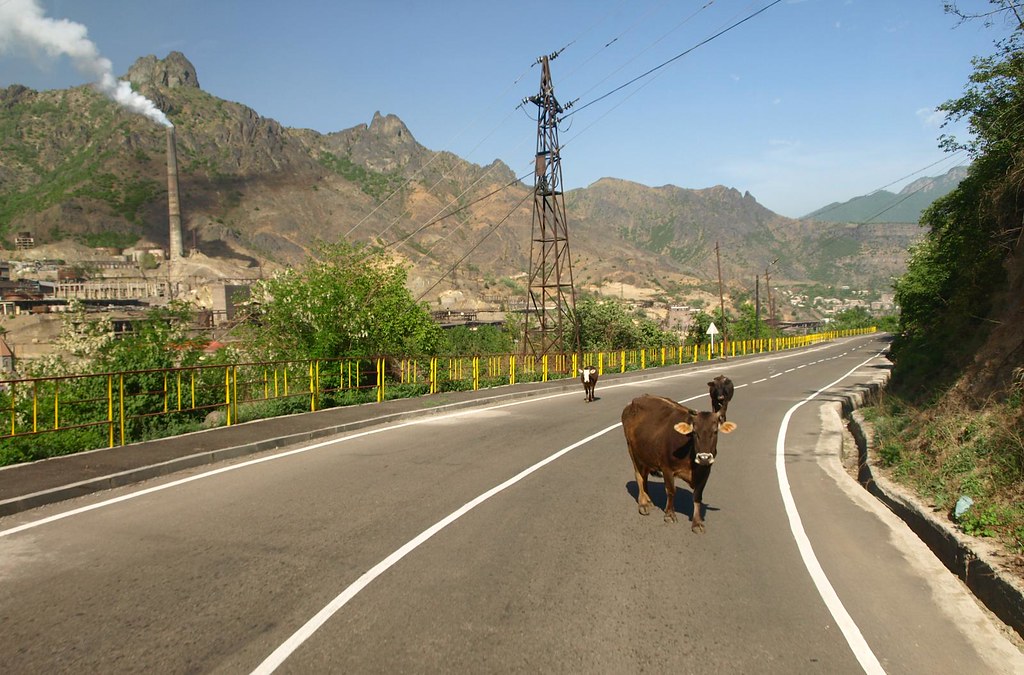 Cows and a factory on an Armenian road — Photo: Morten Knutsen

This total dependency on Russia is about more than remittances. Russian companies own 100% of Armenia’s electrical grid, and the majority of the power plants. All of the gas pipelines, including the one that comes from Iran, are owned by Russia. Of Armenia’s three mobile phone companies, two are Russian and the third is French. In the banking sector, 21 of the 25 banks active in Armenia are foreign-owned.

Have you ever heard that Armenia is an international center for jewelry manufacturing? People tell me that 7% of the world’s famous jewelers are Armenian. I’m not so sure about the world leadership bit, but it’s true that after mining for copper and molybdenum, jewelry production is the second most important industry in the country.

Yerevan’s gold market is in a building that used to house the city’s public baths. It has nine floors: The first two are shops, the others are jewelry workshops. There are 800 shops and up to 6,000 salespeople and jewelers. Everything sold in the building is also made there. I see gold bullion with the stamp of Swiss banks that is going to be melted down for jewelry. The jewelers also melt down gold that people sell in the jewelry shops downstairs. You can buy knock-offs of Rolex and Tissot watches, made to order within 24 hours. 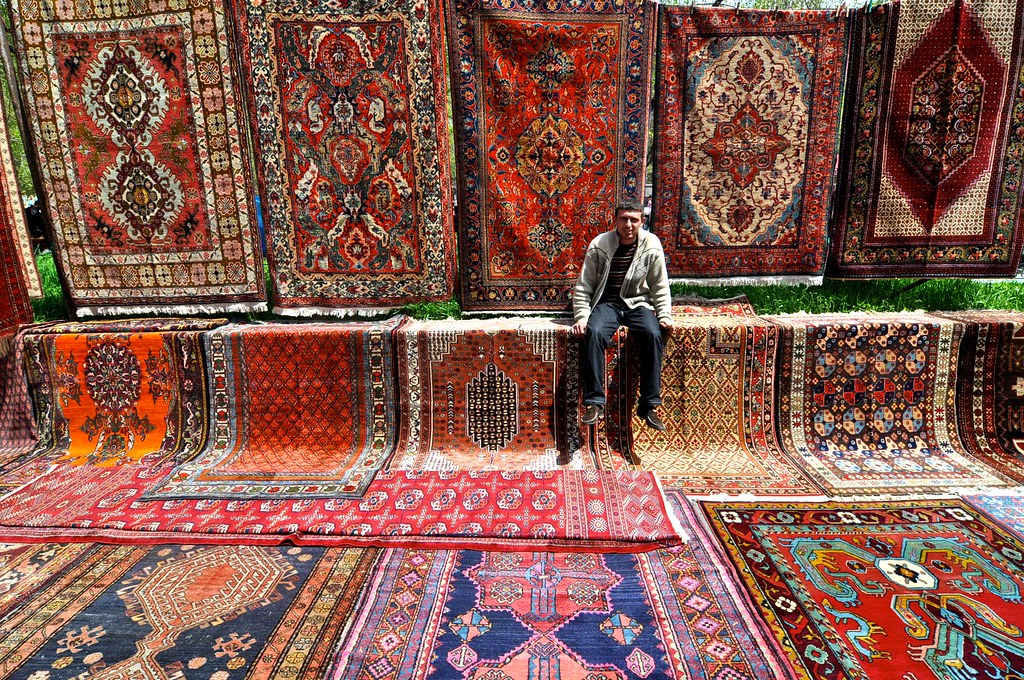 Agriculture is the Armenian economy’s third-largest industry. Most of the income in agriculture comes from making cognac. Yerevan’s most important tourist sites are two famous cognac factories next to each other: Ararat and Noi. Both factories formerly made the famous “Ararat” cognac, but now only one company has the rights to that brand. That company’s stocks have long been owned by Pernod Ricard, a French company.

In addition to “Ararat,” Armenia has another 27 cognac producers. Shakhnazaryan, one of the newer cognac producers, has a factory located near Yerevan in the city of Yeghvard. The company’s owner, Samvel Shakhnazaryan, had lived in Ukraine for years before returning to Armenia eight years ago. At first he sold liquor, then he decided to get into cognac production. The factory opened, from nothing, in 2010, and in 2014 it is expected to sell four million bottles.

Shakhnazaryan says that 95% of the sales go to Russia. I noticed, though, that although the company has only been around for four years, its oldest cognac is aged 15 years.

“Does that mean that you buy other people’s cognac to resell?” I asked the older head of wine production. “Here in Armenia, there is no ‘other.’ It’s all ours,” he responded. In fact, they do think there is no such thing as “fake” Armenian cognac. As long as it is made from local grapes, it is genuine.

Lastly, in fourth place in Armenia’s economy is the IT sector. It makes sense for a small, mountainous country without many natural resources to orient itself towards intellectual products. In Yerevan, the Tumo Center for Creative Technologies holds classes in digital technology, web development and game development, among other subjects, for children from 12 to 18 years old. The classes are open to all and are completely free, and in total around 5,500 kids take classes there twice a week.

PicsArt, a photo editor for mobile devices, is located on the building’s second floor. The company is American, but its founder is from Armenia and all of the operations are in Yerevan. It’s still a start-up, but it’s gaining traction, and now has 45 million active users per month.

Armenia is poised to join the Customs Union with Russia, Belarus and Kazakhstan, but people here feel trepidation about joining its former Soviet States. “Until last September, when we were told that we would be joining the Customs Union, Armenia was preparing to join the European Union, along with Georgia, Moldova and Ukraine,” says Vahagn Khachatryan.

In 2013, Armenia exported $334.5 million worth of goods to Russia, $8.6 million to Belarus and $7.3 million to Kazakhstan. The total GDP of the Customs Union countries is 230 times larger than Armenia’s GDP, and the per capita GDP is 3.5 times higher. Theoretically that could help Armenia’s economy. Armenia’s economy can expect more investments and more exports due to joining the Customs Union, and it will also likely add jobs.

But there are also clear disadvantages. First of all, it will be in a different camp from Georgia, which is joining the EU, and that could complicate trade and transit. In addition, the Customs Union will cause a large number of imported goods to become more expensive — everything from food to cars. Most experts say Armenia’s decision to join the Customs Union is a tribute to history, not based on economic needs.

For Armenia, Mount Ararat is everything. It is the famous cognac brand, the legendary soccer team, the name of the hotel I stayed in. The snow-covered peak is easily visible from Yerevan, but the mountain itself is in Turkey. The loss of Ararat, as well as memories of the genocide of Armenians living in Turkey in 1915, still influences politics. 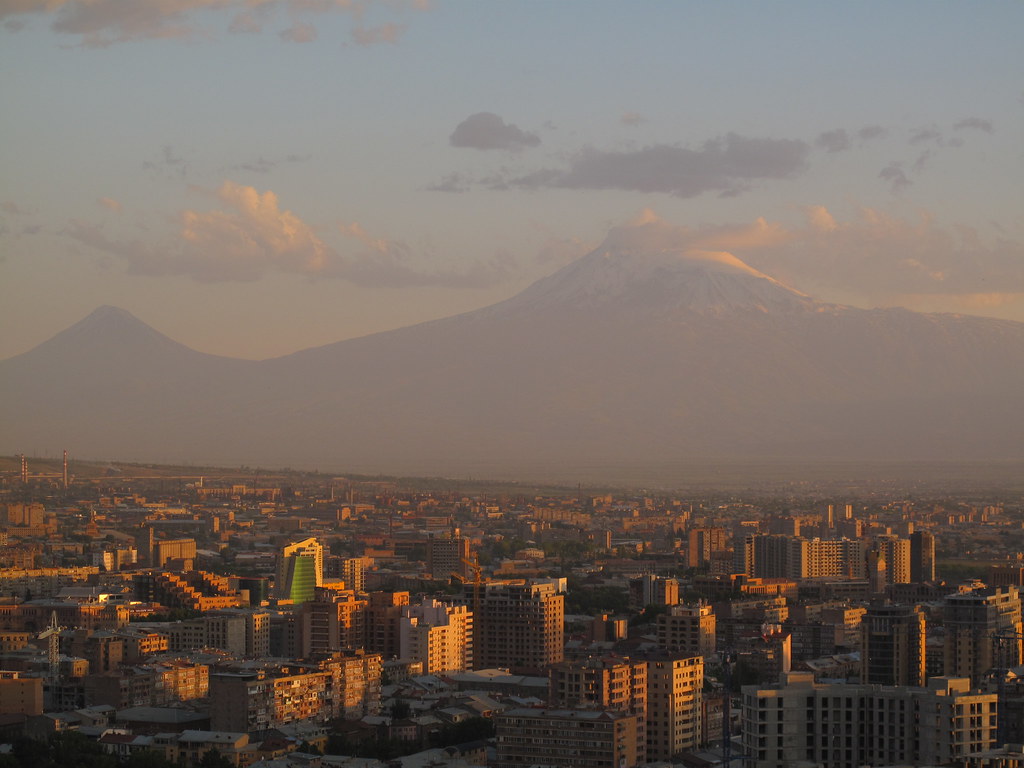 Turkey is so close that on the road through Ararat’s valleys my mobile phone switched to a Turkish mobile network. “Do you see over there, on the other side of the Aras River (the border between Armenia and Turkey), those bright lights?” our driver asked, pointing into the darkness. “That is a NATO base.” Which is why Russian military bases in Armenia give the locals peace of mind.

In Armenia, no matter what you ask, you will get an answer that makes reference to war with Turkey or to the genocide. “There are bells on the historic gates to warn of the arrival of the Turks,” someone might say. Or, “this is a watch tower to look out for Turks,” etc. Azerbaijanis are also called “Turks,” and Armenia’s borders with both Turkey and Azerbaijan are closed.

With its other neighbor, Iran, it has a normal relationship, but Iran is also a Muslim country. With these sorts of neighbors, the small country needs a strong ally. Historically, that strong ally has always been Russia.

After Sargsyan Resignation, What Next For Armenia-Russia Relations?

MOSCOW — Following a series of demonstrations against the political class that began across Armenia on April 13, the country's prime minister Serzh Sargsyan has resigned. His duties are being ...

Unlike the "Righteous Among The Nations" of the Nazi Holocaust, individual Turks who opposed the Armenian genocide are lost to history. Again, Turkey's government is largely to blame.